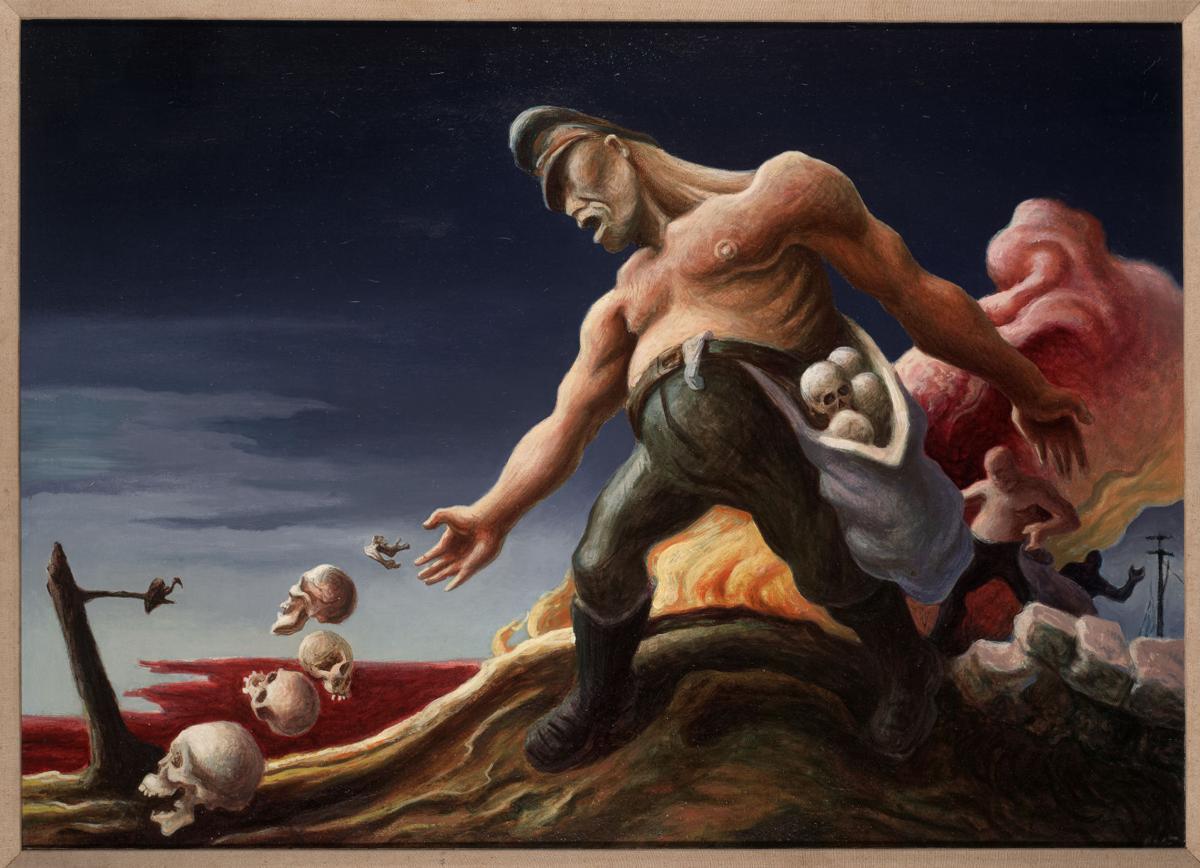 The Sowers by Thomas Hart Benton 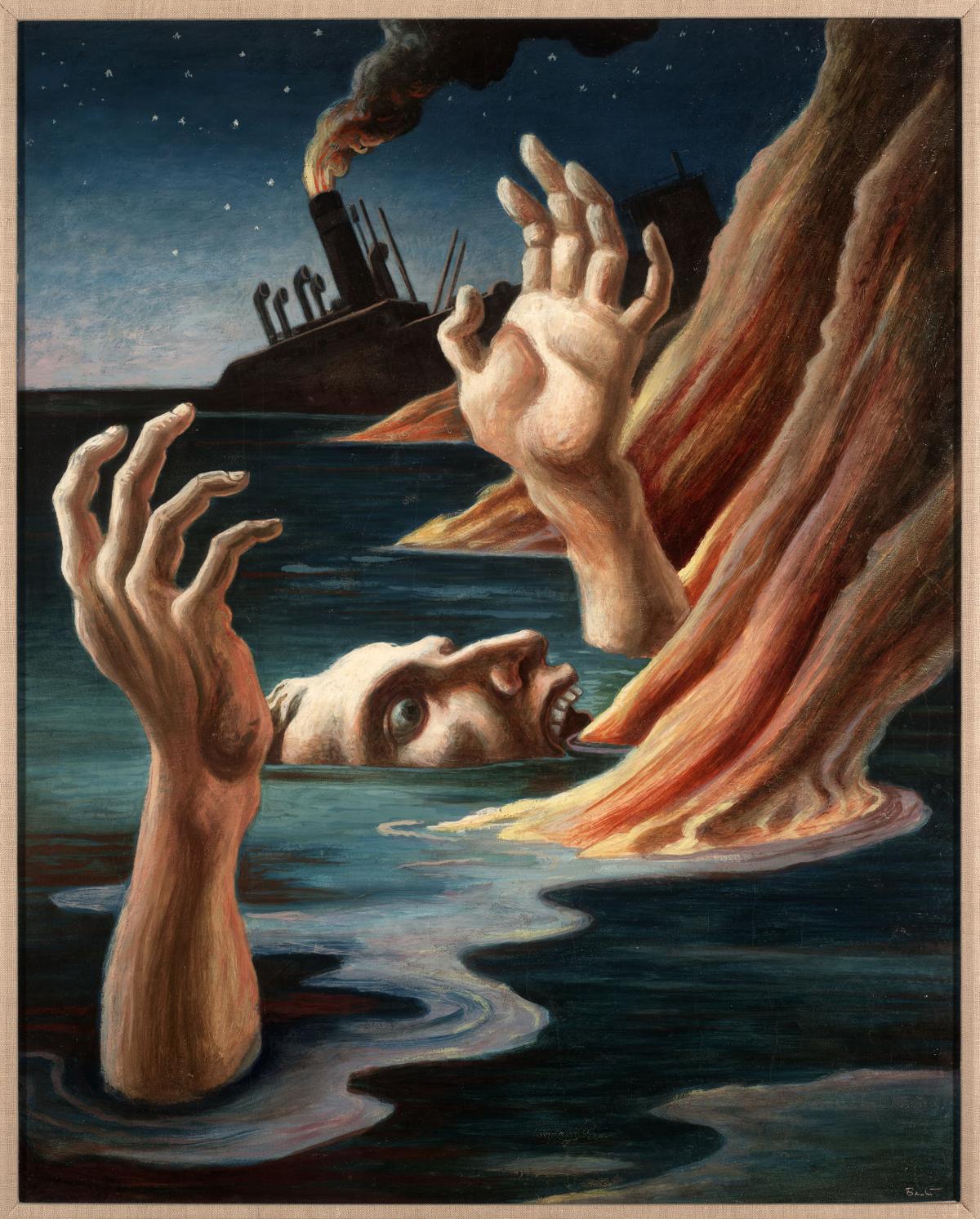 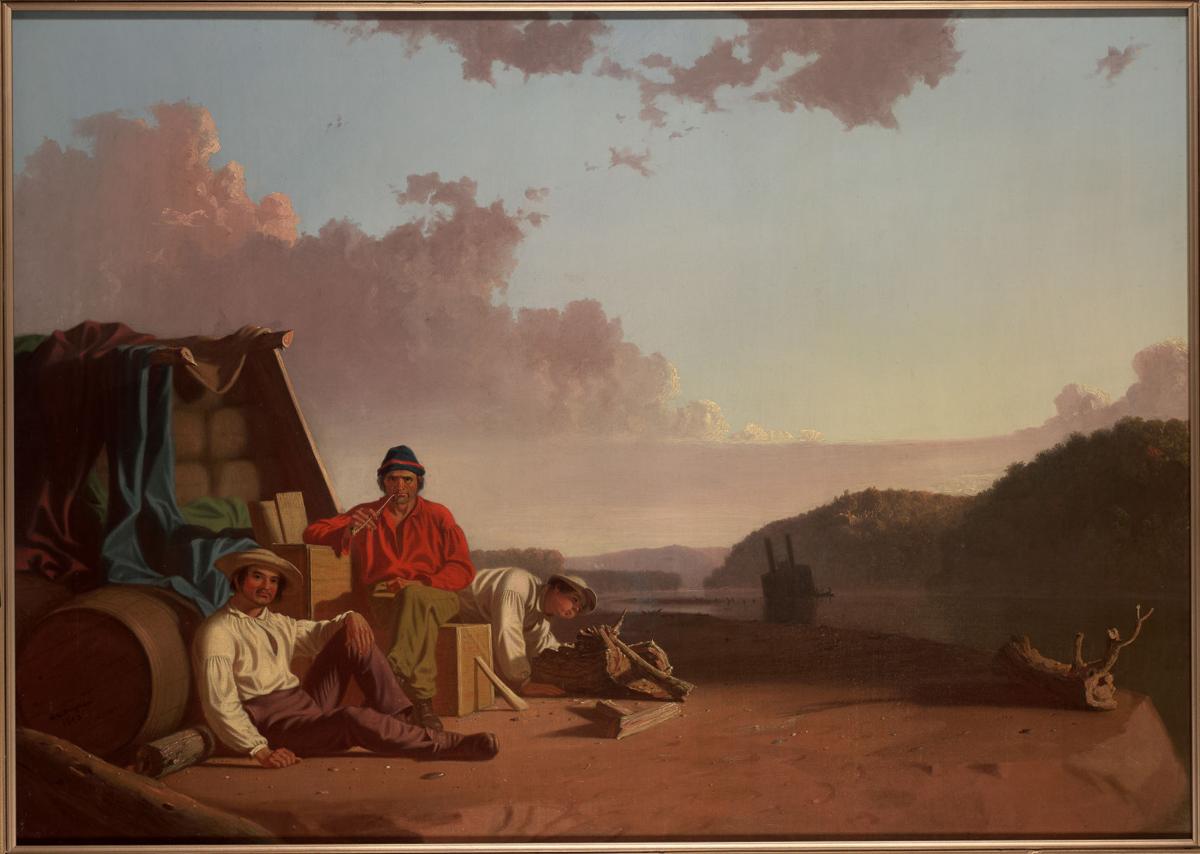 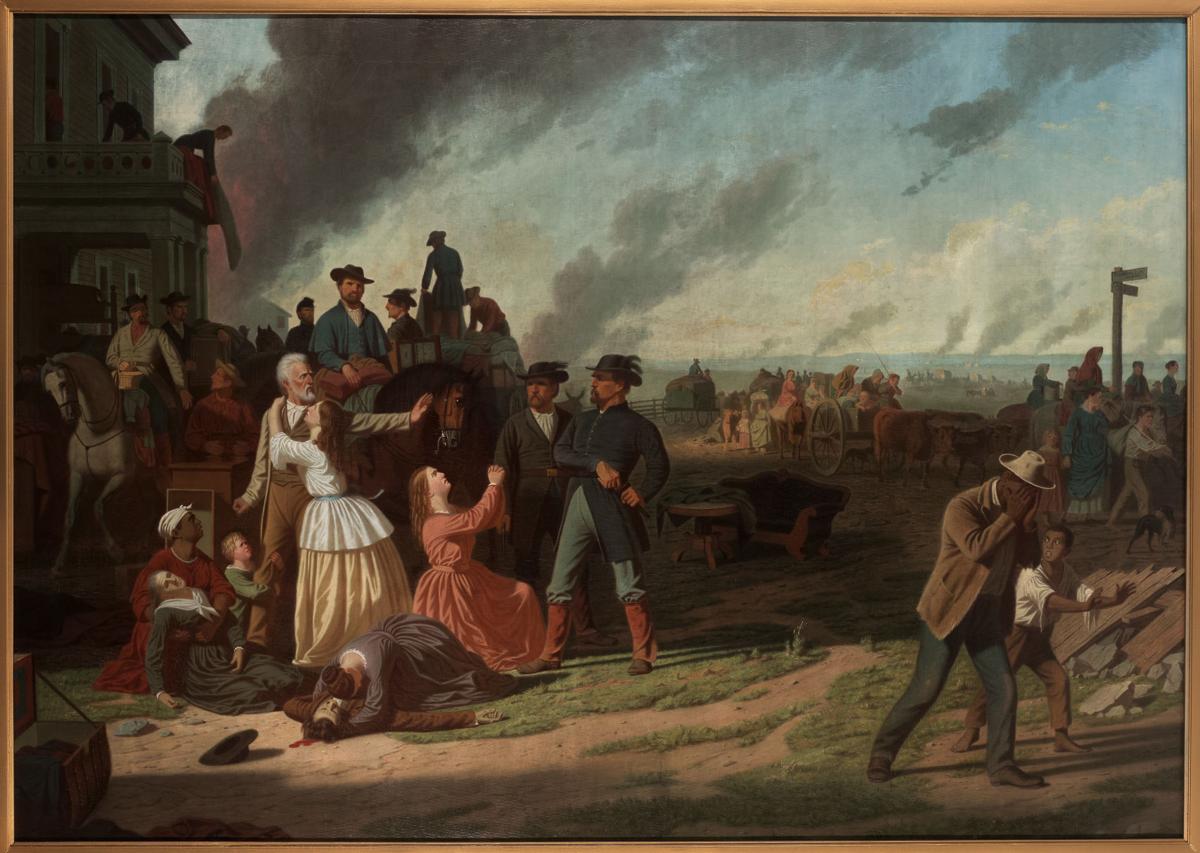 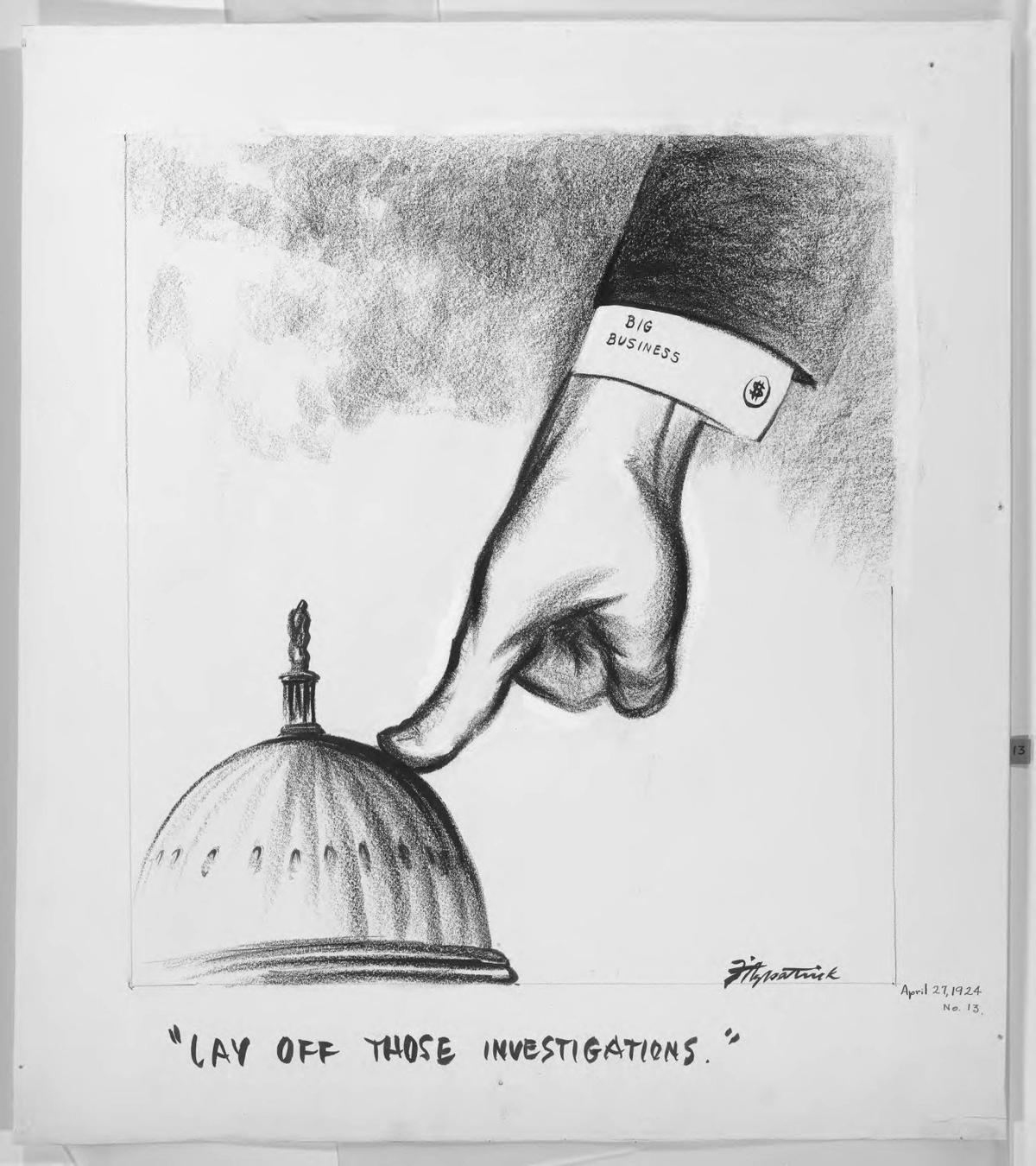 "Lay Off Those Investigations" by Daniel Fitzpatrick

Walking into the State Historical Society of Missouri feels like leaping into the past. The life-size figures depicted on massive canvases stare at you from their fixed spots on the wall, appearing as if they might initiate a conversation. Women across decades welcome you into their homes; soldiers glance back, asking you to follow the troop; and everyday strangers wait in line at a forgotten grocery store on Ninth Street. In just a few small rooms, the State Historical Society brings Missouri’s history to life for the people who still live here.

This summer the Society will move its works to a renamed new building on the corner of Sixth and Elm streets, where the cherished art will finally get an expanded space. The Center for Missouri Studies will be a home for valuable original works by Thomas Hart Benton, George Caleb Bingham, Daniel Fitzpatrick and many other artists. “The design [of the center] is modeled on the colors and textures found throughout Missouri,” says Gerald Hirsch, the director of research activities. “Spaces are filled with natural light connecting visitors touring the art gallery or conducting historical research with Missouri’s landscape.”

Just as the architecture of the new building emulates the state’s history, the art that will fill its walls will do the same. Every piece of work in the State Historical Society is connected to Missouri’s history in some fashion — whether the artist was born in the state, learned from one of the greats like Benton, or chose to portray an important event in Missouri’s history. After the completion of the new space, more works will be displayed, and the pieces will feel less crowded.

The current exhibition space looks more like a repurposed library or office, which can be a challenge for displaying such grand paintings. Some of Benton’s figures practically touch their toes down to the floor while their heads hit the low ceiling. The new building will allow the viewers to take a step back and see the pieces from varying perspectives.

The size of the characters combined with the historical subject matter make the exhibition special for its accessibility. “I think it helps you better understand history through art and better understand art through history,” says Curator Joan Stack. “It’s not nose-in-the-air art. It’s art that has kind of a real relevance to a lot of people.”

Although the new exhibitions will display work from a variety of artists, there are a few big ones you should know before visiting: Benton, Bingham and Fitzpatrick. People travel from all over the world to see Benton and Bingham’s pieces, which are some of the most famous and valuable pieces the Society owns. Fitzpatrick is a nationally recognized cartoonist, and his work will make up a major chunk of one of the new sections focused on editorial cartoons. These three artists stand out, not only for their unmistakable skill and talent, but also for their ability to harness their gifts to comment on sociopolitical issues, either in Missouri or the country as a whole.

The 10 most famous Benton pieces the Society owns are on display now, eight of which come from the WWII propaganda series Year of Peril. Benton quickly painted this series between the end of 1941 and the spring of 1942. “They’re united by this flame and by this kind of odd color scheme, the weirdness of them, the violence of them,” Stack says. “It’s kind of an unusual vision of Thomas Hart Benton because he’s usually thought of as a regionalist artist representing the common people.” Stack mentions that Benton is often recognized for his mural, A Social History of Missouri, in the capitol in Jefferson City. It follows his usual regionalist style she references. But no matter the content, Benton’s ability to convey a strong sense of movement is present throughout his work.

Bingham painted many scenes depicting the Missouri River, and his painting, Watching the Cargo, might arguably be the most famous painting the Society has.

“It’s a very classic example of his work,” Stack says, and it’s one of the paintings Bingham actually signed, which he didn’t do for many of his pieces. Another important Bingham painting in the gallery is Gen. Order No. 11. “There aren’t a lot of artists that did paintings representing the Civil War, but this is one, and it represents Missouri,” Stack says. “It’s not a battle scene, not a scene of a heroic general, but instead, a scene of the effect of war on the civilian community because of guerilla violence.”

Gen. Order No. 11 shows Bingham’s objection to the violation of civil rights, and he uses the symbol of a road sign amid the chaos of the scene to depict the crossroads the United States was approaching in terms of equality. Across all of Bingham’s paintings, a common theme in his style is the use of “hot shadows.” He uses bright colors to show colorful reflected light within the folds of drapery and other shaded areas that give luminosity to his work.

The Society's editorial cartoon collection is national in scope, and most of the pieces come from Missouri artists who have worked for Missouri papers. The subject matter for the cartoons tends to tie into the more general history of the United States, focusing on major events such as the Kennedy assassination and the Civil Rights movement.

The entire collection holds thousands of cartoons, primarily from the 20th century, and Fitzpatrick’s work accounts for roughly 1,000 of those pieces. “In some ways, he’s the big star of our collection,” Stack says.

Fitzpatrick was a two-time Pulitzer Prize winner who used to work for the St. Louis Post-Dispatch. His work was wildly popular, and his cartoons would often assume about a quarter of the sheet on an editorial page. “He had a national reputation for doing really powerful stuff,” Stack says. “Sometimes they were funny, but usually they made a comment about the political situation or the social situation.”

One of the first exhibitions that will open in the Center for Missouri Studies is a gallery of editorial cartoons where viewers will be able to see up close how Fitzpatrick and other artists produced their illustrations. In Fitzpatrick’s case, he typically used a pen and ink to create dramatic darks and lights in his cartoons, and then he would go back and use a grease crayon to fill in the tonal aspects of his images.

Indulge in 'Gluttony' at the Columbia Art League this winter