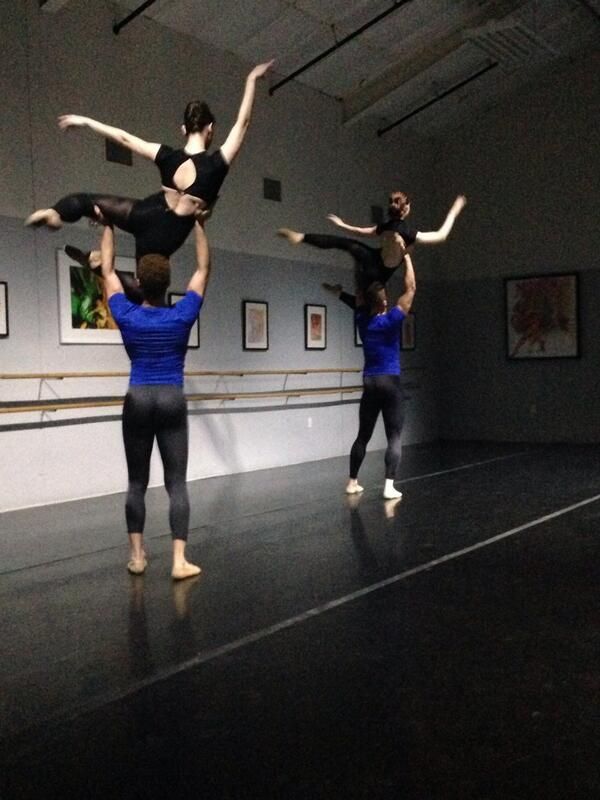 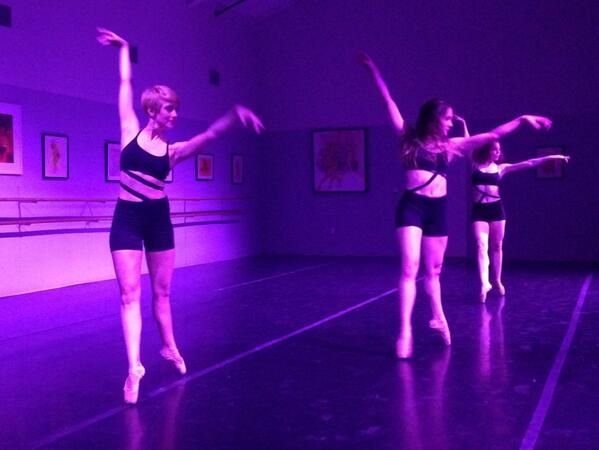 The fierce women of MCB in "The Space Between." Photo: Claire Landsbaum 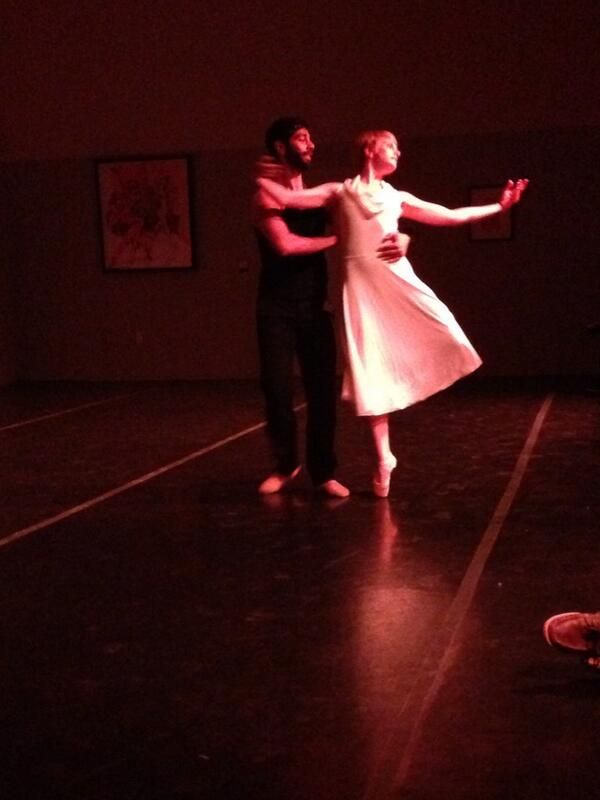 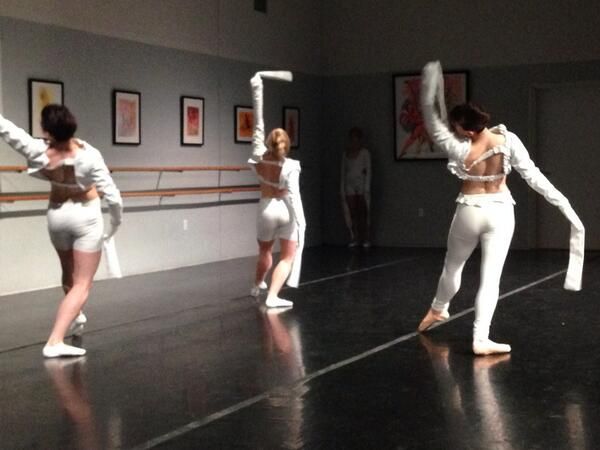 The dancers were so close that their heavy breathing was audible. Sweat shone, makeup ran, pointe shoes clunked on the marley floor. But the movement was just as breathtaking.

Nine pieces were featured in the installation. Some were short, 30 seconds to a minute, others lasted for two or more minutes. Each piece was choreographed by a different company member and each was strikingly different in style, music and message.

Elise Eslick’s “Bach Cello Suite 2” came first. Dancers Emily Baker, Jordan Mazur, Caroline Millikin Euker and Keely Misenhimer began the piece with slow, classic movements and beautiful port de bras. Then featured dancer Caitlin Younker entered and the piece picked up. Eslick’s love for Bach shone in the tenderness of her choreography and the intricate patterns played out with Younker as the centerpiece.

Next came “Personal Space” by Joanne Sandorfi – a sharp contrast to Eslick’s piece. Joshua Hasam and Keely Misenhimer performed a series of jerky, modern-inspired moves to a stirring instrumental piece. Hasam wore a black jumpsuit and Misenhimer was in green; he flung her around in quick, calculated lifts and partner work. The piece was furiously fast-paced, fiercely beautiful, and over before almost before it could register with the audience.

Caitlin Younker’s “Éstapes de l’amour” was soothing in comparison – it featured Fernando Rodriguez and three women who represented different types of love. The first, Emily Baker, was puppy love. The pair danced a sweet, simple duet illuminated by innocent yellow lights. The second, Eslick, was passionate, deadly love. The moves were dramatic, the music heady and the lighting fuscia. The last, Millikin Euker, represented finding “the one.” The light was a soft red and the movement was calm with a sweet note and an undercurrent of stability.

Again, the piece that followed was a sharp contrast. Jordan Mazur’s “The Space Between” was a fierce female trio (Baker, Millikin Euker and Misenhimer) clad in strappy black spandex. Their movements were sharp and angular, accompanied by grunge metal with throbbing bass. Each woman danced separately and then suddenly the three were in sync, carrying out subtle patterns and canons. The piece was en pointe, which enhanced its classical undertones. It lasted just long enough to thrill.

“Flower Duet,” a second piece by Eslick, also thrilled, but in a different way. It was a return to a truly classical ballet duet. The music, by 17th Century French composer Léo Delibes, was a female a cappella arrangement. Millikin Euker, clad in flowing cream-colored silk, was delicate and lovely on Rodriguez’s arm. Her extensions seemed effortless and she looked feather-light in a series of lifts with classic lines.

Millikin Euker reemerged breathless and still clad in silk to introduce her own piece, “Seek the Shore.” Three pairs of dancers in color blocked tights and leotards took the floor for a piece that featured modern-inspired partner work in canons.

Then came Joel Hathaway’s delightful “And Your Ma’ is Good Lookin.’” Hathway used a gorgeous a capella sampling from his friend Hayley Mousley and choreographed a smooth solo for Emily Baker. She carried out the fluid motions with ease, making the piece effortless and deceptively simple. Hathaway’s work was the visual embodiment of cool blues music and left the audience smiling.

Alex J Gordon’s piece left the audience intrigued. His “The Birds: Excerpts” featured Eslick, Mazur and Younker, and Millikin Euker and Hasam as an occasional partnering pair. Movements in the piece were decidedly avian – small, quick, sharp – but there were also slow moments in which dancers progressed through a series of statue-like poses. Gordon also handmade the costumes for his piece, which recalled ruffled feathers and fabric wings.

The last piece, “Gathering” by Fernando Rodriguez, was the most compelling. Set to Zoe Keating’s dramatic cello, the piece radiated intensity and primordial urgency. Dancers clad in royal blue and black carried out partnering sequences interspersed moments that the whole company (minus Gordon and Rodriguez) took the floor. Group work set this piece apart – every dancer moved in sync to create rich visual patterns and textures.

Overall the show had a rare air of intimacy. Each dancer introduced his or her piece and explained some of the inspiration behind it. The sheer number and variety of pieces made MCB’s spring choreographic installation both enjoyable and educational.

What did you think of MCB's installation? Tell us in the comments below.