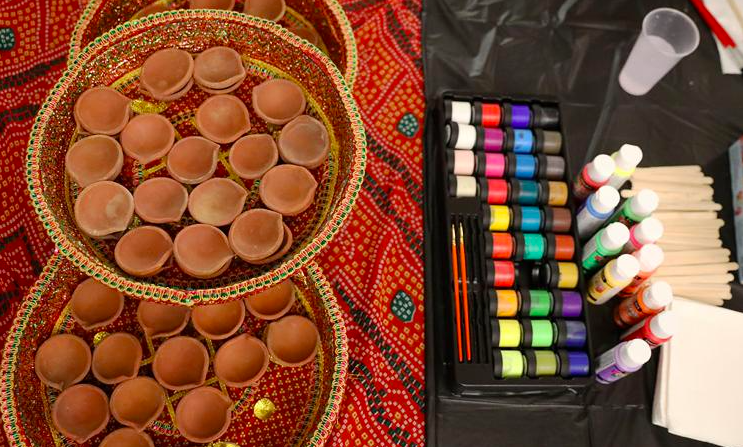 Diyas are made from clay and can be painted with a variety of colors. These are a traditional craft that can be made during the Diwali festival 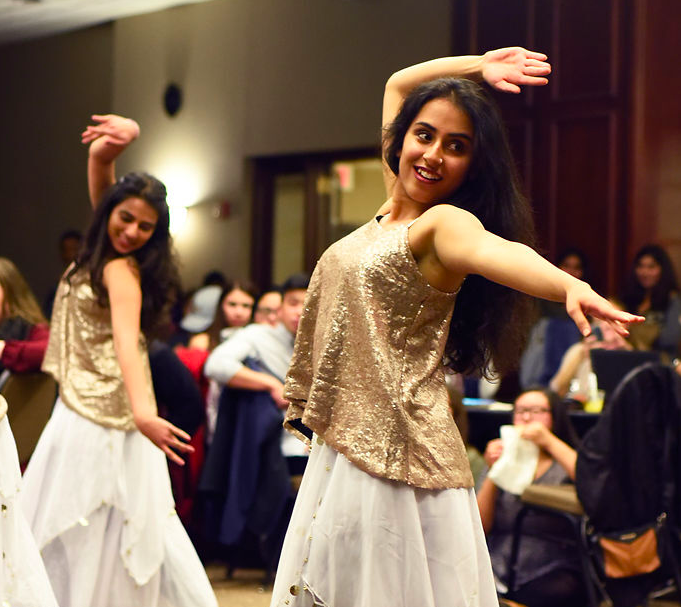 Ayesha Vishnani performs at a Diwali celebration held by MU’s South Asian Students Association in November 2017. Like many other celebrations, Diwali, the five-day Hindu festival of lights, will look different than in past years.

A plethora of lamps, bursting firecrackers and huge crowds is usually what comes to mind when you think of Diwali, the five-day Hindu festival of lights. But there’s another key theme to this celebration: happiness.

“Diwali means the light came in the day for everybody,” says Siva Bodducherla, a priest at the Hindu temple Shanthi Mandir in northern Columbia. “The light means happiness started.”

The origins of Diwali involve a deity defeating a demon. Although various sects of Hinduism have different narratives, most focus on the theme of good triumphing over evil and light over darkness. The third day of Diwali, which falls on Nov. 14 this year, represents the arrival of light. It’s the festival’s biggest and most celebratory day.

The origin of Diwali varies in different religious sects:

Devapati says the festival originated with the god Rama who went on a 14-year exile from his kingdom. Hearing that the demon Ravana kidnapped his wife, he returned and defeated the demon. People of the kingdom welcomed him by lighting firecrackers and lamps.

As with many events, Centers for Disease Control and Prevention’s COVID-19 guidelines have put a halt to the larger gatherings that Diwali inspires.

Diwali in Columbia is already celebrated on a smaller scale than in India, but the Shanthi Mandir temple and MU’s Cultural Association of India are trying to keep the same bright festival spirit during the pandemic.

During Diwali, Shanthi Mandir holds a puja, which means worship, of the goddess Lakshmi, who represents wealth and good fortune. The temple lights a diya, a kind of oil lamp, at the start of the ritual.

Devotees give offerings such as sweets, milk, yogurt, fruit or any dishes made with rice. “What kind of things are available to you, you just offer with the heart,” Bodducherla says.

CAI celebrates Diwali in a broader way because the festival has cultural as well as religious significance. It’s celebrated across India, from urban centers to rural parts of the country. “The community in Columbia is really diverse,” says Rupesh Devapati, cultural secretary of CAI. “We have people from all over India here.”

At CAI, Diwali is a way to bring all new and returning students together. Devapati says students get together for a small potluck and puja. “In India, every state has different food cuisines,” Devapati says. “We try to celebrate it. Everyone can get a different dish from their community.” Dances and acts follow puja.

Shanthi Mandir also usually holds a Gujarati dance called dandiya, which everyone in the Indian community is invited to take part in.

“When I went there, I was absolutely awe-struck with all the enthusiasm,” says Rudra Shukla, president of CAI. “There were around 250 people dancing all together in sync, clapping in sync, and then banging their foot in sync.” The temple will not hold the dance this year.

There are no special decorations in the temple during Diwali as they would take the focus away from puja. “Sincerity is the most important,” Bodducherla says. “It means concentration.” After the ritual, members of the temple light firecrackers outside as part of the happiness the festival emphasizes.

CAI, however, doesn’t celebrate with firecrackers as they are not allowed on campus. “As students, we have to tone it down,” Devapati says.

The association is still discussing possible plans for this year’s Diwali celebration due to the pandemic, Shukla says. If there is demand for an informal Diwali celebration from other students, Devapati says the group may hold a get-together with limitations: a maximum of 20 students and social distancing.

CAI has also postponed India Nite, an annual event it holds in October. The program might still occur in the spring, Shukla says.

You can celebrate a socially distanced Diwali this year. Devotees can still visit Shanthi Mandir but must notify the priests of their visit and follow the temple’s guidelines that require social distancing, sanitation and mask wearing on premises at all times.

Tidying up your home is a typical part of Diwali, so you can spend the festival’s first day cleaning up your space. It’s also believed that buying items during Diwali can bring you prosperity. Common purchases include new clothes, kitchen utensils and gifts for loved ones. Food is a key part of Diwali’s happiness theme. People begin preparing snacks a month before the festival, Shukla says. “You make it, you distribute it to everyone, and you’re spreading happiness,” he says. You can try to prepare your own Indian dishes or visit local Indian restaurants such as Taj Mahal Indian Cuisine or India’s House.

And of course, don’t forget the light. Lamps, string lights or candles would work: it’s the intention that counts.

7 tips to refresh your space during the pandemic