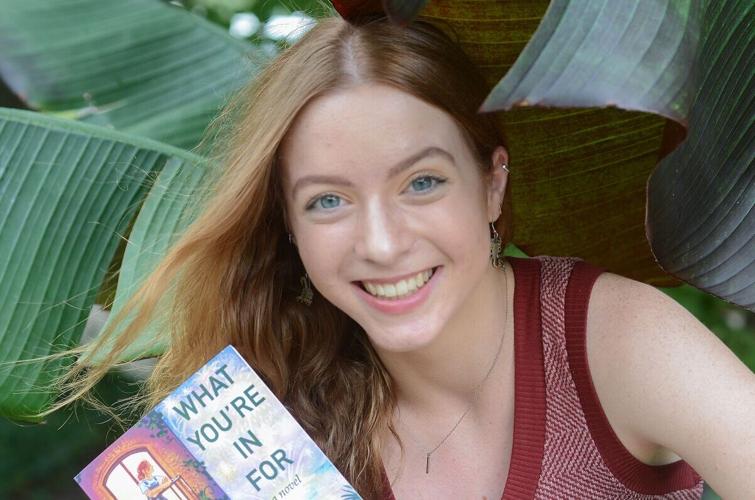 Local author Audrey Dae Bush smiles holding her new book “What You’re In For” on  at Shelter Gardens in Columbia. 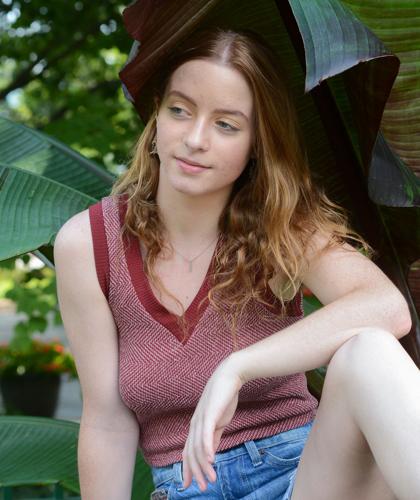 Missouri native Audrey Dae Bush was enchanted by the hills and lakes of the Ozarks during a family trip to Branson. She knew that she would one day write a story set along the Show-Me state’s back roads. She even knew it would be magically romantic — but she didn’t know her book would be queer.

After years of plotting and one year of writing, her daydreams became the paperback, What You’re In For, released in June.

With the Ozarks as the backdrop, a seemingly normal coming-of-age story turns into a whimsical goose chase with a romantic cherry on top. Bush’s main characters, Ruth and Esther, navigate growing up, facing unfriendly competition and questioning their purpose in life. Bush says she hopes to establish herself as an inclusive Missouri author because of her diverse set of characters.

Unlike her characters, most people Bush knew growing up in Washington, Missouri, were white and conservative. So when Bush realized she was queer, she says she doubted whether her home community would be supportive of her work. “It felt revolutionary to write about two girls falling in love up against the Bible Belt,” Bush says. “I was scared because I’m queer, and I know I have homophobic relatives, and what if they rejected my book because of that?”

Bush says she was happily surprised by her family members' reactions to her book, which reaffirmed her pride in her home state. “My friends and I felt like we were the only people in our town who weren’t like everyone else,” Bush says. “But I'm pretty sure everyone in a rural town thinks that. I wanted to reclaim Missouri for us; it’s a beautiful state, and we live here, too.”

Bush is currently earning a bachelor's degree in English at MU and is planning to attend graduate school. Bush has previously published short fiction in the East Central College Literary and Art Review, and scholarly essays in MU's MOSpace Institutional Repository. Bush plans to continue her path in traditional publishing with her second novel, and will continue to intern with The Missouri Review in the process.

Gamez says she discovered Bush's book through former classmates and decided to give it a chance. Gamez, who is half-Mexican, gushed about how Bush captured the energy of small town Missouri. The Missouri setting hooked her, but seeing her own experiences on the page through Antonio's character kept her reading. Antonio, one of the secondary charactes in the book, is a Hispanic character dealing with burnout who represents golden child and model minority stereotypes. “Hispanic culture in Missouri being a prominent aspect of a story isn’t something you ever see,” Gamez says. “It felt nice to be represented.”

Bush's editor, Andrew Marty, says he was grateful to explore his home state while reading about the characters speeding down I-70 to escape Jefferson City then racing through Springfield.

Marty was proud to have been involved in the project. “Knowing that people beyond your circle are reading [your book] is everything,” Marty says.

Bush isn’t finished with all of her What You're In For characters yet. She says she plans to write a second book featuring Antonio, a character from What You're In For, that takes place in Victoria, which is the fictionalized version of Columbia in the book.

Hike your way through mid-Missouri

Authors explore the links between graphic novels and memoirs