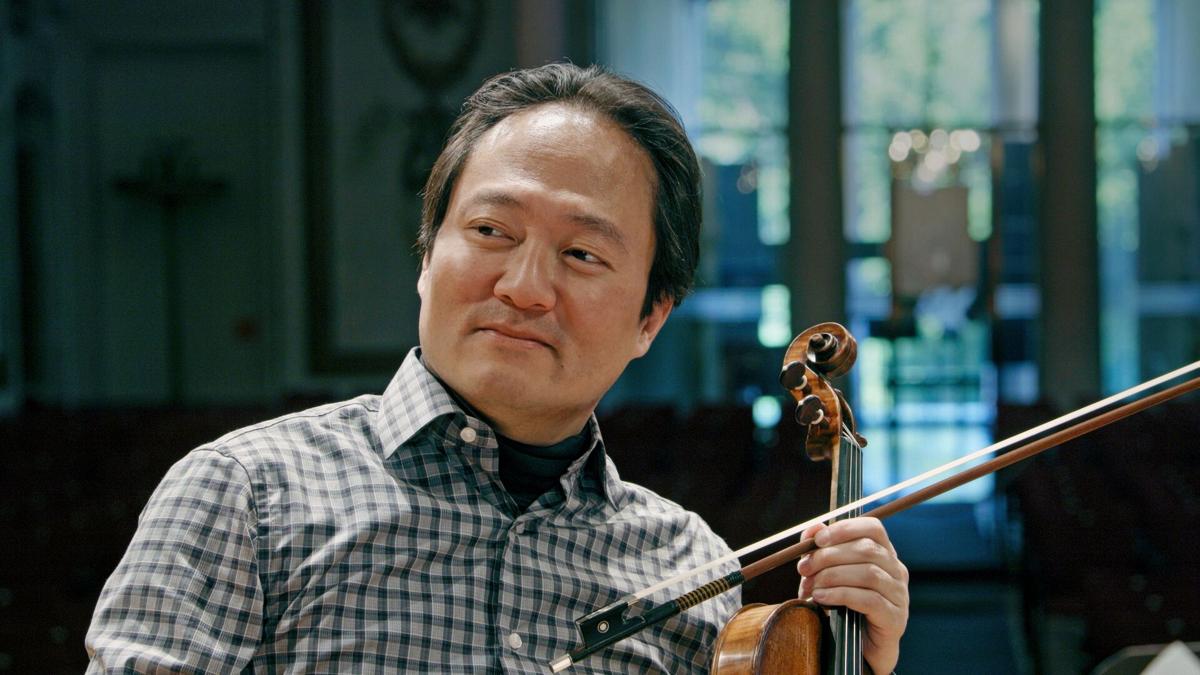 Scott Yoo (above center) has a recommended listening list that includes Ludwig van Beethoven, Antonio Vivaldi and Johann Sebastian Bach, according to his PBS blog posts. 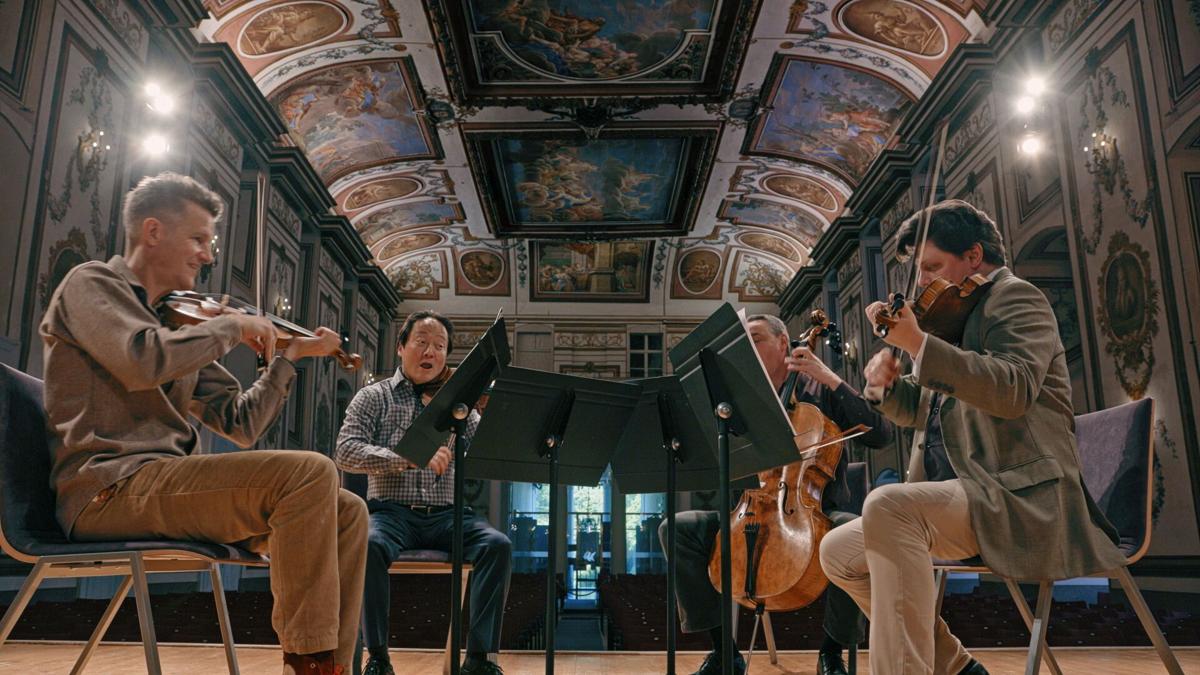 The first episode of the second series will be centered around composer Haydn and his contributions to the string quartet form and repertoire.

Since he was a teenager, Scott Yoo has been almost restlessly performing in concert halls around the world. He started playing the violin at age three, and became serious about the craft at age eight. When he was 11, he played with an orchestra for the first time in Seoul, South Korea with the Korean Broadcasting System Symphony. It has been go, go, go, until the world halted due to the pandemic.

Though his schedule remains busy, his physical presence has remained in Columbia, where he lives with his wife and associate professor of flute at MU, Alice Dade. “It’s been great,” Dade says about life with her husband since the pandemic. “This is the most I’ve seen him since we got married in 2014 … it’s been awesome.”

Simply put, Yoo is a conductor and a violinist. A musician. But as Dade describes him, “He’s like an onion. He’s got so many layers.”

Yoo is the chief conductor and artistic director of the Mexico City Philharmonic Orchestra. He’s the music director at Festival Mozaic, a music festival in central coastal California. One of his newer titles is host and executive producer of Now Hear This, a miniseries about classical music presented by Great Performances on PBS. The show's second season is premiering Friday, Sept. 18 at 8 p.m.

Well, what is Now Hear This about?

I’ll start at the beginning: I played a concert four years ago. The day before the concert, I gave a talk on the composer Brahms. It was a lot of work to put the talk together, but only seven people came to that event. I was disappointed. But the next day, after the concert, someone came up to me and said, “Hey, I really like your concert.” I said thank you. Then, he said, “But I really like what you did yesterday.” He said he was Harry Lynch and he was a producer from PBS, and that we should make a TV series together. Originally, the idea was to take that lecture I did and film 20 or 25 of them. We kept talking about it, and then he asked me, “What’s your goal for the show?”

I said it would be great if we could replicate the success of Young People’s Concerts from 50 years ago. He told me if I wanted to do that, the show as it was would be too narrow. The types of shows that are the most appealing on PBS are shows like Antiques Roadshow and all the cooking shows that incorporate culture and travel, like Anthony Bourdain’s. We decided to do a show that had those elements, but rather than cooking, it was music. We showed PBS the pilot and they loved it. And now we’re already working on season three.

The ultimate goal of Now Hear This is to get more people to put classical music on their smartphones. It’s simple. They don’t have to listen to it all the time, but just put one thing on. If that one track of Vivaldi’s "Four Seasons," or a Schubert song, or a Mozart piano concerto … we’ve won. I feel like we’ve won, music has won and humanity has won.

How can someone start enjoying classical music?

The reason why pop music is so catchy and popular — and this is not an insult or a compliment — is that first of all, pop songs are very short. They’re four minutes, five minutes. Secondly, the material repeats over and over and over. The chorus of a Britney Spears song might repeat 15 times in four minutes, so by the time you hear a song once, you might actually already remember the tune. Whereas, a Mahler symphony can last over an hour and nothing repeats. The human brain needs repetition to sort of remember. With repetition, classical music is the kind of thing that rewards you more and more, the more you listen to it. It’s much more vertical than horizontal. If you’re willing to invest a little bit of time, if it means just putting one piece of classical music on your playlist … those pieces of music stand up to repetition in a way that I think other music doesn’t.

It’s true and it’s not true. I would say classical music isn’t necessarily dying, but it’s changing. The way people are listening to music today has changed. People aren’t watching TV anymore for broadcast. They’re streaming on Netflix and listening to radio on Spotify … there are all of these platforms that are so difficult to understand, so it’s hard to quantify how much music people actually consume. I’d agree that audience numbers are declining slowly, but I think the Now Hear This project is one effort to stem that tide. But, it’s not happening everywhere. There are places where classical music is actually taking off, such as in South Korea and the Far East in general. In Europe, classical music is still extremely strong.

And I think this generation that’s coming up is a pretty special generation. I see lots of creativity and lots of skill in that generation. I tell every young person that I encounter that this is your time now. You should really do something and change the world. I see good things in Generation Z. I’m very hopeful.

Do you have any tips for people who are starting out with classical music?

I have some blog posts on PBS.org and I list things to listen to for certain composers, and I just did one on Beethoven, so people can definitely look for that.

Classical music can be intimidating. It’s like saying you want to get into Shakespeare. The corpus of work is just so huge. Each play is so monumental. So, how do you begin? But I will say this: if you hate something, that’s valid. If you love something, that’s valid. If you’re indifferent to it, that’s valid. I think people are worried about having the wrong opinion like, “if I don’t like this, there must be something wrong with me.” No. There’s nothing wrong with you, that’s absolutely a valid point. Peoples’ opinions are very personal, and everyone’s opinions matter.

That being said, if you’re a novice to classical music and want to start off with Beethoven’s Fifth Symphony — that’s a great place to start. Everyone knows how it goes, but that’s Beethoven at the height of his power. If you like that, if you get that, if you understand the drama in that piece of music, then you get classical music. It’s not above you. For me, the real tragedy is when people feel, “I can’t understand that” or “I don’t have that kind of intellect.” That’s baloney. Anybody can understand that, just give yourself a chance.