For Lynn Itagaki, MU associate professor of English and Women’s & Gender Studies, Women’s History Month is an important time to make sure that women, particularly women of color, are included and recognized as role models, leaders and inspirational figures.

To help jumpstart your celebration of Women’s History Month, Vox has some recommendations of what to watch, read and listen to throughout the month of March.

This Hulu drama miniseries depicts the story of the women both for and against the ratification of the Equal Rights Amendment (ERA) in the 1970s. In nine episodes the series details the pro-ERA women’s movement headlined by second-wave feminists – Gloria Steinem (Rose Byrne), Bella Abzug (Margo Martindale), Betty Friedan (Tracey Ullman) and Jill Ruckelshaus (Elizabeth Banks) – and the Stop ERA efforts led by Phyllis Schlafly (Cate Blanchett).

One of the episodes focuses primarily on Shirley Chisholm (Uzo Aduba), the first Black female candidate to run for presidential nomination. “In terms of electoral politics, that’s really crucial as you can draw a line from Shirley Chisholm all the way to Stacey Abrams today,” Itagaki says. “So, there’s this kind of reverberation across history, which I think is really great.”

Also on Hulu, this eight-episode series details the experiences of two mothers in a predominantly white suburb of Shaker Heights, Ohio. Elena Richardson, portrayed by Reese Witherspoon, is a landlady and journalist with four teenage children. She rents out her property to artist Mia Warren (Kerry Washington) and her teenage daughter Pearl. This series is based on Celeste Ng’s 2017 novel of the same name.

While this series is fictional, it features two strong female characters and offers viewers a chance to think about how both women’s  lives are influenced by their different socioeconomic and racial identities.

In her moving and acclaimed memoir, Chanel Miller tells her story of being sexually assaulted by Brock Turner in 2015 on the Stanford University campus. Miller became famous as “Emily Doe” when her victim impact statement went viral on Buzzfeed and other media outlets in the days following Turner’s sentencing.

Miller released her identity and published her memoir in 2019. The memoir, while difficult to read, is a captivating, beautiful, haunting and compelling narrative of Miller’s life before and during the assault as well as her struggles and resilience in the aftermath.

Amazons, Abolitionists, and Activists: A Graphic History of Women's Fight for Their Rights (2019)

Written by Mikki Kendall and illustrated by Aster D’Amico, this graphic novel provides a fascinating and detailed overview of the history of women’s rights ranging from ancient Sumer and Greece to modern corporate and inclusive feminism. The graphic novel covers notable women and groups of women who have been warriors, queens, spies, activists, abolitionists and more. It focuses on the wide and diverse range of movements that women have been involved with including civil rights, suffrage, labor, abolition, LGBTQ rights and liberation and reproductive rights.

Written by Daniel Stiepleman and directed by Mimi Leder, this biographical film details the early stages of the late Supreme Court Justice Ruth Bader Ginsburg’s (Felicity Jones) career. The film begins with Ginsburg’s first year at Harvard Law School and follows her career as a professor at Rutgers Law School. Much of the film focuses on her preparation for and subsequent successful oral arguments for the Moritz v. Commissioner court case, which helped to set the legal precedent that gender discrimination is unconstitutional.

This film is available to stream on Showtime or rent on Prime Video.

Directed by Greta Gerwig, this film adaptation of Louisa May Alcott’s 1868 novel depicts the lives of the March sisters: Jo (Saoirse Ronan), Meg (Emma Watson), Amy (Florence Pugh) and Beth (Eliza Scanlen). The film jumps back and forth between scenes of the March sisters during childhood and when they’re older. The film offers a vibrant, touching and rich portrayal of the four sisters, and how they navigate the reality of what it meant to be a woman in the 19th century. Jo, in particular, resists the societal expectation that required women to marry in order to access financial security.

This film is available for purchase on Prime Video and YouTube. It is also available to stream with a STARZ subscription.

Produced and hosted by Katie Nelson and Olivia Meikle, What'sHerName covers women’s history through the stories of women that you may not know. This insightful and entertaining podcast has featured women including composer Florence Price, illustrator Tasha Tudor, Senator Martha Hughes Cannon, activist Sybil Stockdale and novelist Constance Fenimore Woolson. New episodes of the podcast are released every other Monday.

Show notes and more information about the podcast hosts can be found on the What’sHerName website.

This new podcast is hosted by Gillian and Kendra, two friends who are interested in “women throughout history who have broken the mold, dared to be different, and engaged in some generally kick-ass behavior,” according to the podcast’s description. Badass Women of History has featured women including pirate Jeanne de Clisson, artist Artemisia Gentileschi and political mastermind Margaret Beaufort.

You can find additional information on the podcast’s Facebook page. 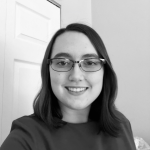 Digital Editor, Spring 2021. Hannah completed her undergraduate degree in English literature in May 2020, and she will complete a journalism masters degree in May 2022. Feel free to reach her at hgallant@mail.missouri.edu or on Twitter @GallantHannah.