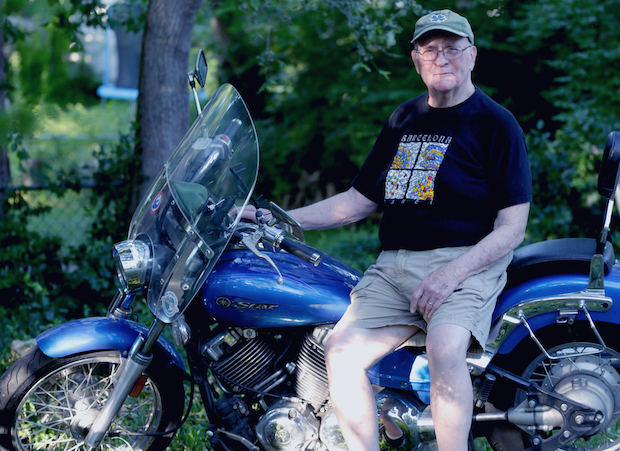 For his fifth and most recent motorbiking trip, Bob Forsee rode a Honda XR 150 through Vietnam. It was 2018, and at 74 years old, he took an 1,800-mile route from Ho Chi Minh to Hanoi. He spent months researching.

Since his late 20s, Forsee had wanted to speed off on motorbiking excursions. His original dream was to journey as far south as he could through the Americas, but life came first.

Forsee would see many jobs throughout his graphic design and teaching career, including creating design for toy packaging, teaching fashion and illustration at Stephens College and running his own business, Dodge Artwork. None, however, involved motorbikes.

When he retired and sold his company, it was in part due to a shift in the graphic design world after the emergence of the Mac computer. “[My clients] discovered, ‘Hey, we can buy a Mac for our secretary in the outer office here, and they can do an awful lot of that stuff,” Forsee says. “We won’t bother having Bob do it.”

Instead of holding resentment toward the technology that changed the course of his life, Forsee openly embraced it and used it to plan his motorbiking adventures and to communicate with his loved ones while traveling the world. He soon discovered the Horizons Unlimited website, which was dedicated to motorbiking trips, and made connections with other like-minded people.

With that resource as a guide, soon after retirement, Forsee revisited his lifelong dream and spent over a year planning his first trip. For his maiden excursion, Forsee rode his Kawasaki KLR650 from Columbia to Panama City in November 2006.

The 4,200-mile trip wasn’t a solo one. Forsee met up with Harold Brooks, another motorbike enthusiast, in Texas, who he met on the Horizons Unlimited website, and they traveled together down Central America.

His wife, Brenda Forsee, doesn’t ride motorbikes, and she initially was nervous when his passion for the motorbikes re-emerged. His first adventure through Central America was plagued by poor internet connections. The longest she went without hearing from him was 10 days. “I even called the credit card company to see if there was any activity, wondering if he was safe,” she says.

Despite this, she has continued to support him. He has since taken five motorbiking trips — others included routes through eastern Europe, southern Africa and South America. His trips ranged from about 1,500 miles through Austria and the Czech Republic to more than 5,000 miles when he took a month-long journey through the Andes Mountains in Chile to Cusco, Peru, to see Machu Picchu, the remains of an ancient Incan city. On his journies, he has visited the famous Victoria Falls in Zimbabwe and the Dolphin Coast in South Africa, and he spent his 65th birthday visiting Peru’s Valle Sagrado.

The couple communicates via FaceTime and Skype throughout most of his trips, and technology often helps as he navigates his way through foreign countries. “If you want to know about using an ATM in Bangladesh, for instance, it’s just freaking incredible,” Forsee says. “It’s everything right out there for you.”

Between planning cross-continental trips, Forsee decided to pull his graphic design skills out of retirement to help others. For the past 10 years, Forsee has created a 24-page monthly newsletter for the Columbia Senior Center, which Brenda proofreads for him. It was while visiting the center that Forsee discovered another need he could fill — computer classes.

He says he realized that while many seniors used computers, many wanted to learn more. With his graphic-design experience, Forsee volunteered to teach a class. Using the newsletter as advertising space, he announced a new program that would be held twice a week in May. Its name is straight to the point: Computer Class for Beginners.

The course teaches the basics — how to use a mouse, how to double-click, how to copy and paste and how to create and name folders on the desktop. Finally, seniors learn how to access the internet safely and confidently and how to use email. Forsee taught the class for two Mays in a row, until 2020 when the pandemic forced postponement.

Even though the Columbia Senior Center remains closed until further notice, Forsee encourages other seniors to embrace technology and not be ashamed of learning how to use it. After all, it was technology — first a motorbiking website and then researching his trips — that helped him pursue his own dreams in retirement.

Collecting history: He tapped into a community through sports cards

Eye for alpacas: Their small farm became a creative business