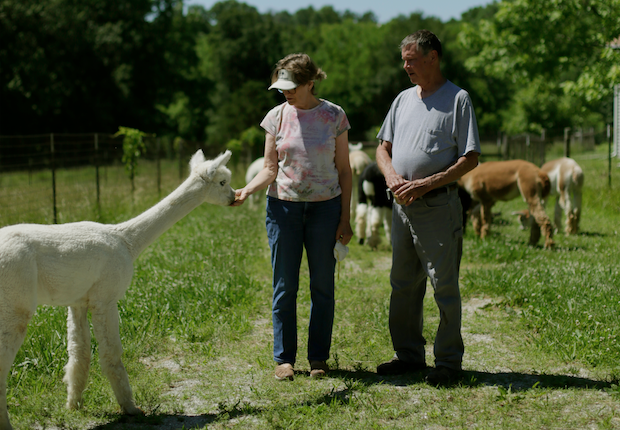 Gary and Mary Licklider name their alpacas after book characters, including the year of Dr. Suess-inspired names such as Cindy Lou Who and Mayzie Bird.

Gary and Mary Licklider have been raising alpacas for about 18 years at their farm, Curly Eye. They began with five alpacas and have raised so many since that they don’t know the exact number. They now keep about 20 of them at a time.

Mary and three other women use the alpaca wool as part of the business Heartfelt Alpaca Creations. They make clothing, shoe insoles (their most popular item), coasters and stuffed animals from the fine fibers. Some wool also is made into yarn, and the courser portions become batting for comforters.

Gary originally is from St. Louis and Mary is from Washington, Missouri, but they both have some farming in their background. The Lickliders talked with Vox about what it’s like to tend a herd of these wooly animals.

What made you decide to raise alpacas?

Gary: We wanted animals that you did not have to eat to enjoy. We considered raising llamas but realized they were big and hard to handle, so we went to an alpaca farm and fell in love with alpacas.

How did you come up with the name Curly Eye?

Gary: I do woodworking projects and making small jewelry boxes and small projects for friends. I typically use curly maple and bird’s-eye maple for products. When we got our alpacas, we noticed they had big eyes and long, curly eyelashes, so we felt the name just fit.

How does the shearing process work?

Mary: The actual shearing only takes about an hour and a half, but we usually make a party out of it.

Gary: We have used the same guy for about 14 years, and he comes from New Zealand to the United States. He stays with us for a couple of days, and we shear our alpacas before we go around to other alpaca farms in the area and help shear their animals.

How much do you yield during shearing?

Mary: We get maybe 500 pounds from other farms. We usually do batches of about 300 pounds, but we’re doing two to three batches like that each year.

Gary: We spend about 15 minutes in the morning and 15 in the evening with feeding. Maybe once a week, I’ll spend about an hour in the barn really cleaning up thoroughly. Once a month they get their Ivermectin and meningeal worm shots. Once every three months you have to cut toenails. Takes about an hour. That’s about it.

How do you choose the names for each alpaca?

Mary: I taught English for about 20 years, and I choose a work of literature, or an author each year. The Dr. Seuss year we had Cindy Lou Who, Theodosia Geisel, Mayzie Bird and Little Lola Lopp.

More than hair: Her salon and nonprofit make a difference in the community

They’re no jerks: Duo brings the taste of Jamaica to mid-Missouri