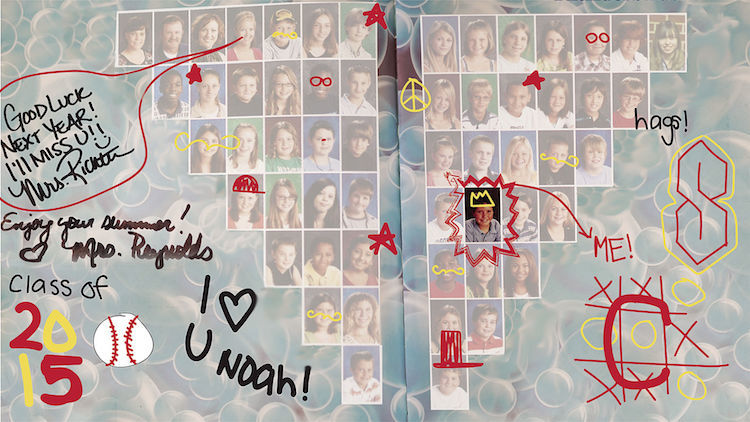 Noah Higgins-Dunn attended Congress Middle School in Kansas City. His yearbook brings back memories of an earlier time. Conversations around sexual identity have changed a lot since then. 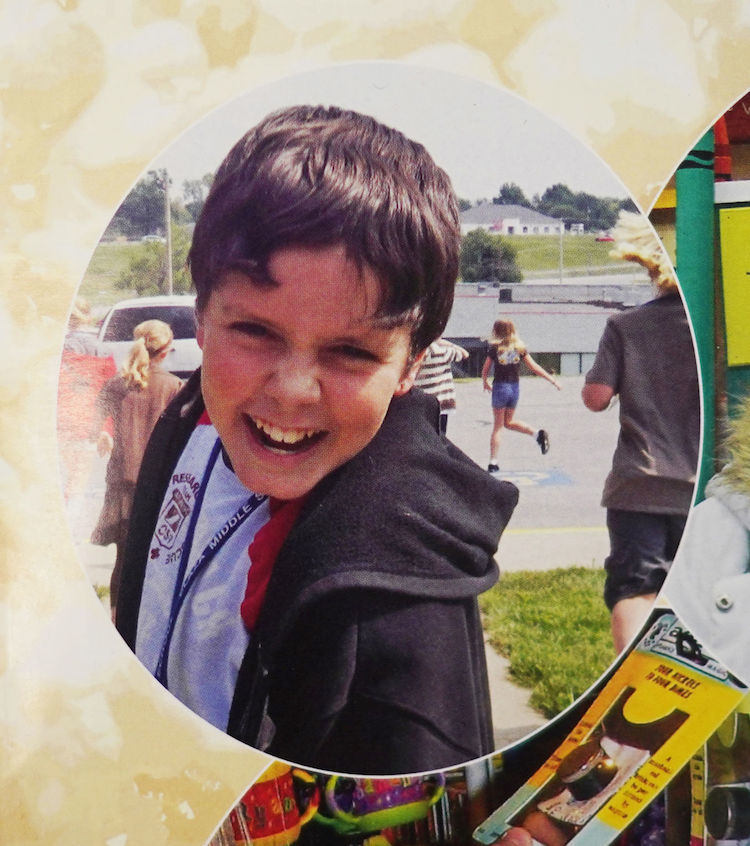 Higgins-Dunn as a sixth-grader, growing out his bangs in an attempt to look more like Justin Bieber.

It’s been nearly 10 years since I roamed the halls of my middle school in the suburbs of Kansas City, and for the most part, I performed the rituals of childhood like my peers.

I tried playing baseball but quit because my coach only let his son pitch. My parents knew I wasn’t very good at soccer, but they let me try anyway. My time in dance was short; the girls were intimidating, and I cried through every session. I once attempted dating a girl, too, but I knew it wasn’t right. I wasn’t sure why or how, but from an early age I knew I liked boys.

Navigating sexuality and gender identity as a teenager is hard, but living in an unbefitting heterosexual shell is harder. By the time I entered high school, I had attended endless sex-ed courses, year after year, but not once was I taught what it meant to be gay. The feelings for girls my teachers said would develop never did. Eventually, I assumed I was the odd one out.

Basketball tryouts were underway when I visited Gentry Middle School one late afternoon in September 2018 after the final bell. Boys were gathered outside the gym, donning white jerseys and lacing up their court shoes. Erin Maynard, an outreach counselor at the school, escorted me past the huddle of hopeful preteen boys who began filing into the gym just as the girls shuffled out.

Not far from the traffic at the gym door was our destination: A glass display case featuring a stuffed toy Jaguar with a rainbow flag wrapped around its neck. Framing the school’s mascot were posters of flags representing LGBTQ sub-communities such as transgender, lesbian, pansexual, genderfluid and genderqueer.

Steps down the hall, underneath a row of college pennants, posters of notable celebrities, such as Miley Cyrus and Laverne Cox, who identify with each community, lined the wall. The signs had been sporadically arranged around the building by the students.

Maynard is a co-sponsor of the school’s newly founded Gay-Straight Alliance and, alongside the organization’s other co-sponsor, Caitlin Cunningham, the group devised the exhibit to celebrate LGBT History Month, which occurs in October. Its existence, however, inflamed the community immediately. The display constructed to answer students’ questions provoked even more from parents and a local radio host.

Gary Nolan, a self-proclaimed libertarian, calls himself “America’s Voice of Liberty.” In the middle of Nolan’s show on KSSZ/93.9 FM on Oct. 19, less than a week after the display was put up, he mentioned the posters, saying he was “disturbed by it.” He urged listeners to call the district, encouraging them to tell the school “to take this poop down.”

“Now, if you ask me, when you put up a word and a definition, that’s teaching. You’re teaching somebody,” Nolan said on the show. “Based on state law, I don’t think they have the authority to do this in middle school because state law dictates that these lessons that are taught be taught to age-appropriate kids.”

Nolan was referring to a Missouri statute that requires, among other things, that the school district notify parents or legal guardians of the content of “human sexuality instruction,” which solidifies their right to remove their child from any part of the discussion.

Cunningham, however, says sex education and teaching sexual and gender orientation are not necessarily the same lesson. The display was for LGBTQ History Month and meant to celebrate LGTBQ identity and notable icons, rather than provide the instruction Nolan argued against.

“A lot of times, people equate talking about gender and sexuality with sex and the idea that you’re promoting promiscuity or sexual activity,” Cunningham says. “And it’s because part of those conversations automatically include the attraction aspect of it.”

Yet, when I was in middle school, no one shielded me from discussions that promoted heterosexuality as the normal or preferred orientation. Most students, regardless of their orientation, are provided heteronormative curriculum and activities from an early age. Seven states still incorporate “no promo homo” laws that ban teachers from providing any discussion about the LGBTQ community in sex education and, in some instances, require teachers to discourage homosexuality as a “lifestyle.” Even with the growing number of gay-straight alliances like Gentry’s that provide resources nationwide, LGBTQ students are generally forced to apply heterosexual education to their own experiences.

But Becca Mui, education manager for the Gay, Lesbian and Straight Education Network, a national organization working to create LGBTQ-friendly schools, says that the classroom is a good place for these discussions to happen in the most age-appropriate way.

“These conversations belong in school where students are sent to learn about themselves, as well as the world around them,” Mui writes in an email. “This ensures that students are having these conversations and lessons with their peers, from an educated professional, and in a developmentally appropriate way.”

GLSEN found in a 2017 survey of students ages 13 to 21 in the LGBTQ community that nearly 65 percent reported no representation of LGBTQ topics in any of their curriculum. Since 2001, the percentage of students reporting positive inclusion of LGBTQ issues in school has hovered below 20 percent.

Equating lessons about LGBTQ identity with sex education remains one of the biggest obstacles preventing schools from implementing inclusive curriculum, Mui writes. Another obstacle is the fear of pushback from parents and family members, which is why it’s important for school administrators to be supportive of inclusive topics and to adopt policies safeguarding a respectful learning environment.

Mui says the best practice is to unite the school community in the mission of accepting and respecting community members whatever their sexual orientation, gender identity or expression.

With the growing visibility of LGBTQ people in popular culture and the number of kids coming out as LGBTQ and gender-nonconforming, Mui says it’s more important than ever that schools serve as a place where students can discuss identity and dispel stereotypes in a safe space.

On the Monday after Nolan’s show, Gentry Principal Fairouz Bishara sent a letter to parents signaling the school had reached a compromise: Posters depicting celebrities in each sub-community would come down, but the definitions and the display case would remain. “It is not our intention, by any means, to advocate for any type of sexual orientation nor to encourage sexual activity, but to promote compassion and empathy for others,” Bishara wrote.

Cunningham acknowledges it wasn’t a complete win, but “it is also not the elimination of representation for this community and its allies.”

From the onset, Cunningham expected a reaction like the angry emails from parents. If someone didn’t say something, if the display failed to generate a conversation, then she says it didn’t educate enough. “It’s the fear of that unknown that causes people to react the way they do, when they send those kind of emails,” she says.

As for the future of the new Gay-Straight Alliance, the co-sponsors have their visions for the organization, but they’re going to leave it up to the students to decide.

“I want for our students, whoever they are, to feel like people are seeing them,” Maynard says. “And they’re not alone in this, and that they’re not being forgotten.”

A display like Gentry’s, or even a display at all, would’ve never been found in my school. The glass case represents a small victory for a newly born middle school Gay-Straight Alliance, but the battle begs the question: Are we willing to discover the unknown?

It’s the same daunting question that propels every LGBTQ kid on a quest, often alone, to uncover their identity. The path is evident for some, but for others the mission is onerous, the challenge exhausting. In every school, in every state, it’s time we explore answers together.

What it means to be black in Columbia