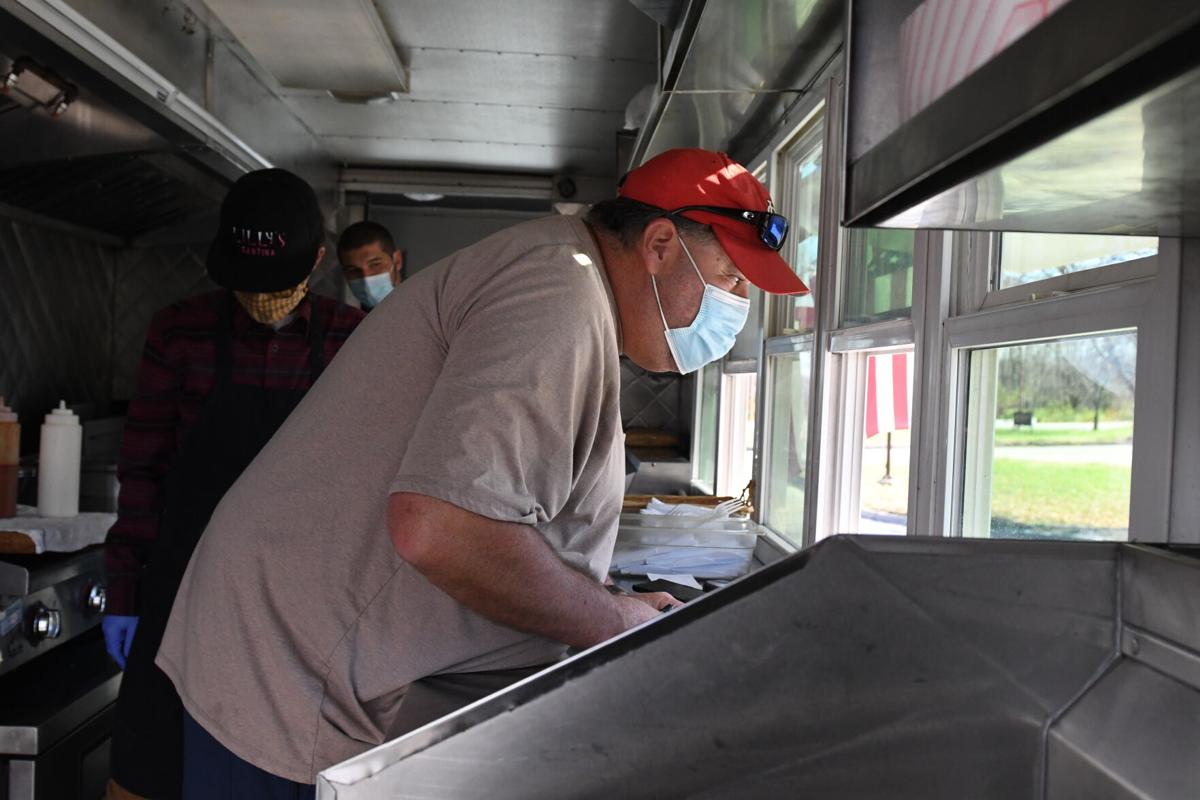 George Nickols, the owner of Lilly's Cantina, runs business inside the food truck on Wednesday, Nov. 11, 2020 outside of the Veterinary Diagnostics Laboratory. Nickols works with his son Donnie Nickols and Chris Jones. 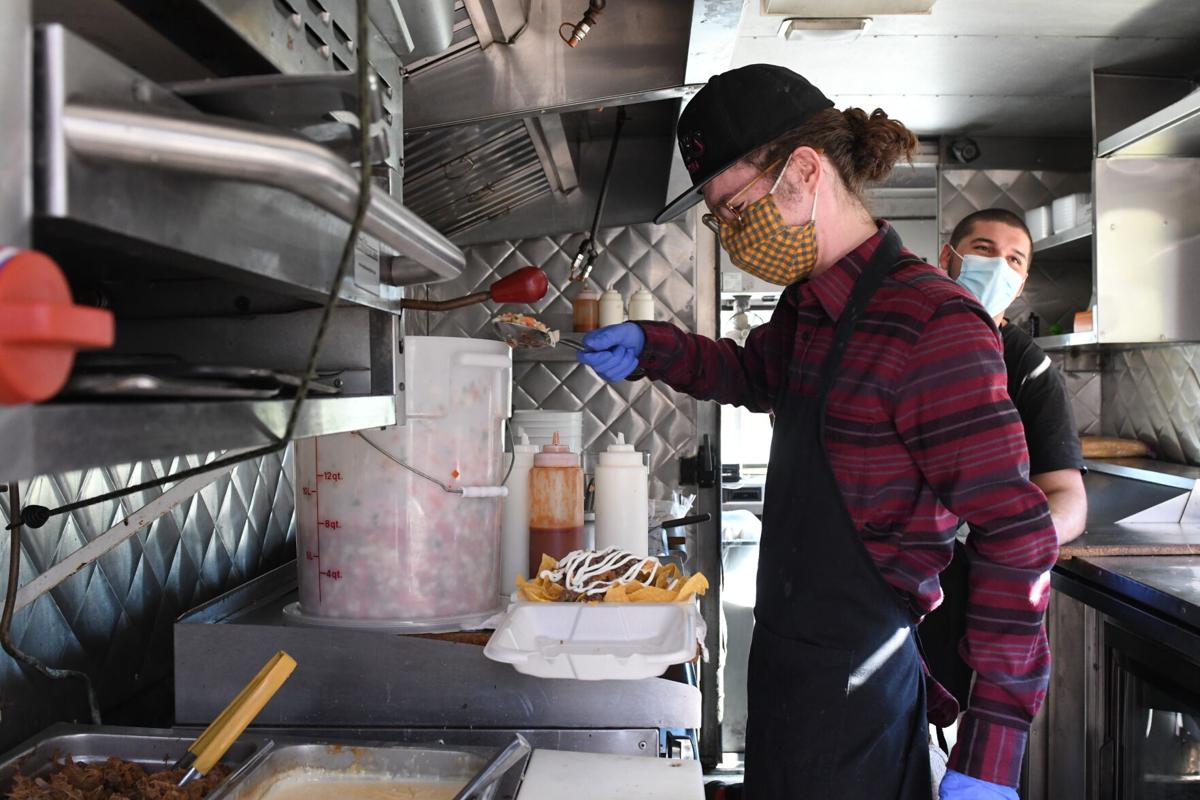 Chris Jones, Lilly's Cantina chef and pico de gallo expert, prepares all the cold food and sauces for each day. 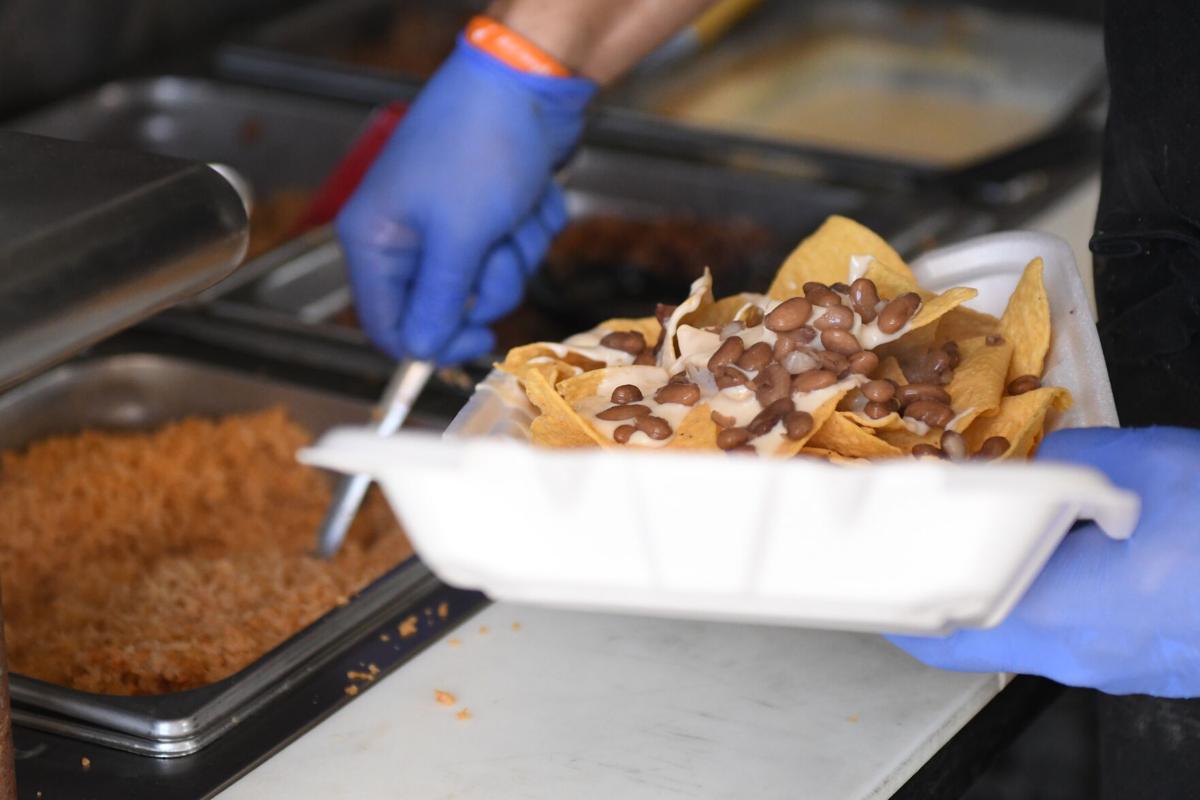 George Nikol's inspiration behind the food is from living in Southern California for many years.

Outdoor dining and socially distanced seating have been the eating-out norm since March, and food trucks are perfectly suited for both. Columbia has a robust food truck scene that includes 46 licensed mobile vendors, says Kala Wekenborg-Tomka, environmental health supervisor at Columbia/Boone County Public Health and Human Services. In November 2017, 25 vendors were licensed. There were significantly less in 2010, with only four.

Although dining has had to adapt, the food truck industry continues to be on the rise, according to the Global Mobile Food Truck Market 2020 report. The report takes into account market size, volume, and value and price data.

Lilly’s Cantina has been serving Mexican street food with a gourmet edge since 2014. George Nikols, co-owner and operator of Lilly’s Cantina, says, “We’ve been consistent, and we’ve noticed an uptick (in profits) with COVID.”

Nikols says the three big challenges he faces include finding suitable consumer locations, dealing with weather and handling mechanical maintenance on the truck. In Columbia, there are designated spaces where food trucks park and conduct business, such as on other businesses’ property and on college campuses. Nikols says the food truck community does its best not to stack up in one spot. Social media accounts are the best way to know where food trucks will be operating because they change locations frequently and might not be open on days when conditions are unfavorable.

So what’s it like to run a food truck? Vox shadowed Nikols on Oct. 28 to see a typical day of cooking in a food truck.

George Nikols arrives with his son, Donnie Nikols, at Lilly’s Cantina’s commissary. The kitchen is off of Vandiver Drive, tucked away in a small strip mall with a St. Louis Cardinals flag hanging on the door. It’s still dark when they begin to prepare the food. Today’s special menu item is shrimp, which they marinate first. Some days, the truck serves up fish that George Nikols catches himself.

“All of our sauces and marinades are homemade,” he says. “Donnie really has made a lot of them just by throwing things in a pan and testing them by trial and error.” George Nikols says the key to cooking, for the self-taught chef, is to practice and listen to other cooks.

Chris Jones, the truck’s pico de gallo master, arrives ready for work. He creates the pico that has tomatoes, onions and cilantro at one of the stainless steel counters, and the scent of fresh onions and cilantro fills the room. “Pico de gallo takes a lot of skill, a lot of work, and tacos are only as good as the toppings and sauce,” George Nikols says. Donnie Nikols and Jones work at the preparation tables, and George Nikols plans the truck locations for the week and updates their location information on social media.

The aroma of different spices and meats fill the air. Pollo asada cooks in the oven, carnitas slow roast, beef and shrimp are marinated and cooked. “We try our best to keep it fresh and local,” George Nikols says. “The price sometimes prevents the ability to buy local.”

Queso heats up in a melting machine, and blenders mix green salsa. Donnie Nikols shuts off the blender and tastes his creation. His face distorts. “Oh my God, this is too hot!” he says. Jones offers ways to tone down the spiciness. George Nikols says from his desk, “Well, Donnie can handle spice, and if he’s saying it’s hot, it’s too hot.” Donnie Nikols continues experimenting with the salsa’s flavor.

Once the food is all cooked, Jones and Donnie Nikols put it into pans. The two young men carry food into the back of the bright, colorful truck, decorated with a design by George Nikols’ wife. Then the three men load at 10:30 a.m., and the Freight Liner MT55 leaves its parking spot. The truck meanders slowly through the streets until it pulls into the Boone Hospital parking lot.

Jones puts chips into styrofoam containers so they’re ready to go when people order nachos. Donnie Nikols lays out tortillas next to the flat top grill and prepares smaller containers of meats, cheese and pico de gallo. The faint smell of gas permeates inside of the truck while the grill heats up.

The food truck’s windows open. George Nikols greets customers and repeats orders back to make sure they’re right. Suddenly, a flood of nurses, doctors and hospital staff comes out of the building and makes its way to the parking lot.

Donnie Nikols cooks made-to-order quesadillas. George Nikols works the windows and chats with their customers, calling out names when their orders are up. Jones is placing toppings onto nachos and handing Donnie Nikols whatever he needs. Tacos, nachos, quesadillas and huge burritos move out the window constantly.

“Woah, that was crazy,” Donnie Nikols says after the rush end. “They never have come out all at once like that before.” The truck took 75 orders in less than 60 minutes. All of the men clean up their stations with spray bottles and rags. George Nikols says, “75% of all the work we do is cleaning.”

The Cantina’s windows close, and the crew drives back to the commissary. They clean and organize the truck so it will be ready for tomorrow, and all the leftover food is thrown away. They bring dishes into the commissary to be washed.

George Nikols heads home after 10 hours of work. He enjoys spending time with his 14-year-old daughter, Lilly Jacks. The truck is named after her. He spends his post-work hours doing house chores, cooking dinner and taking Lilly to her various activities. “I want to have a life with my daughter,” he says.

George Nikols says he is looking to extended the business to include dinner hours, but that would require more employees and more money costs. He is considering spots in downtown Columbia for nighttime business. For now, he says he enjoys going home, after serving food all day, to his family.  

Fiddle & Stone Bread Co. has the recipe for sourdough success