Can beer tell a story? Local craft brewers say it does, and they rely on local artists to express these meanings. These artists help give many local craft beers their personalities with the can labels they design.

“He drew the logo of Logboat on the spot, on a napkin, at a bar, at one in the morning, and we were like ‘sweet, that’s done,’” says Andrew Sharp, one of the founders of Logboat Brewing Co., about artist Mike Wolf. That was back in 2012 when Sharp and the other two founders, Judson Ball and Tyson Hunt, were first talking about opening a brewery. They knew from the beginning they wanted Wolf’s work to represent their brand.

Sharp says around half of the artwork that now appears on Logboat’s beer cans are paintings Wolf had already completed when the brewery started working with him as its only logo designer. The founders work together to develop label ideas, which they then pitch to Wolf.

He calls the process “head stew.” The idea suggestions are like vegetables floating around in stew: They cook and develop in Wolf’s head until they form a complete idea. Then, he makes sketches of what he comes up with and emails them to the founders, who make more suggestions, and the process continues until they all agree on an idea. After that, Wolf draws it and sends it to Logboat’s graphic designer Sarah Snowgren.

“We give (Wolf) just a little bit of input, and he goes wild with it,” Sharp says.

All of Bur Oak Brewing Co.’s beers tell a story. Craig Stichter, the owner of the brewery, works with local artist Tim Flanner to create a brand with a story that resonates with the culture of mid-Missouri. The first label Flanner designed for Bur Oak was for its Trail Bender brew; after that, Stichter was sold. “Tim got it,” Stichter says about Flanner’s first design for the brewery. He could see that Flanner could communicate the brewery’s story in a creative way, but Flanner also understood Bur Oak’s brand, a quality that Stichter valued.

For the past two years, Flanner has been the designer of most of the brewery’s labels. Working directly with Stichter, the two decide on what image would best represent the narrative behind each beer.

The logo for Lily Ale is inspired by the tiger lilies that grow near the big tree and around mid-Missouri. Flanner also designs labels that tell the story of the brewery itself with brews such as Clyde’s Caramel Cream Ale, which features artwork of Bur Oak’s brewery cat, Clyde.

In 1990, a year after Boulevard Brewing Co. was founded, Payton Kelly helped with the label design for Pale Ale, the brewery’s first craft beer. Within five years, he became Boulevard’s design director. He quit his job at Hallmark so he could work full-time at the brewery. Through the years, he has followed founder John McDonald’s vision of branding Boulevard in a way that touches on the brewing traditions of Kansas City in the 1930s and ’40s. “He wanted to sort of resurrect some of that sense that beer could be so much more than what most Americans understood it to be,” Kelly says. Now, 22 years after Kelly became Boulevard’s full-time designer, the brand is recognized nationally and is pioneering what’s possible for craft breweries.

FIND IT AT CRAFT BEER CELLAR: 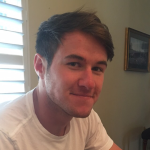