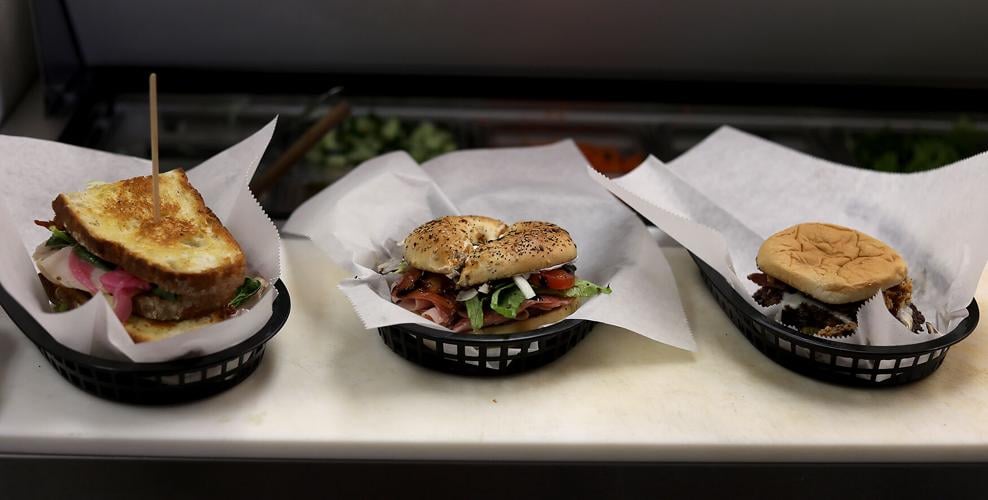 Three orders are lined up before being carried to customers’ tables at Old Neighborhood Cafe. Isaac Parrish, who said he frequents the restaurant on a weekly basis, said he loves the food there. A favorite of his is the Mama Leitza sandwich, which was named after owner Vanessa Leitza. 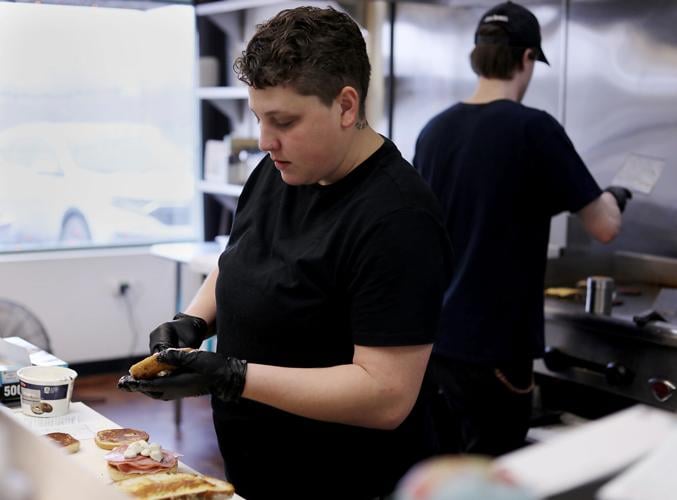 Vanessa’s daughter, Autumn Leitza, prepares a bagel sandwich at Old Neighborhood Cafe. Autumn said she primarily does the public relations and marketing for the restaurant, but has been helping in the kitchen on busier days. 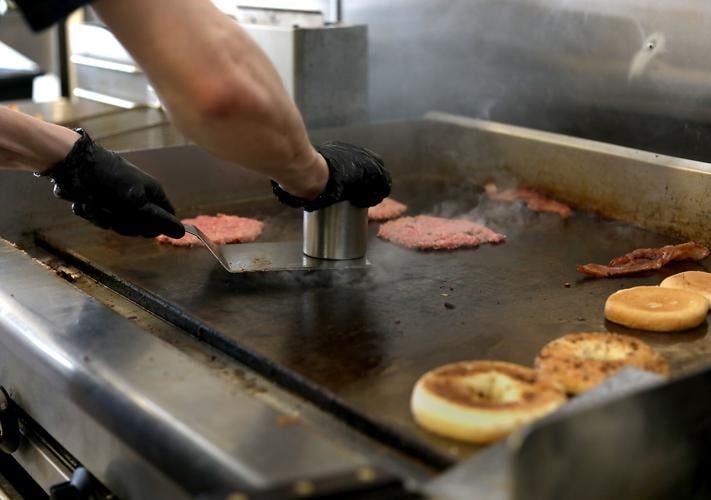 Taylor Bailey prepares burgers at Old Neighborhood Cafe. Bailey opened up the restaurant with the Leitza family in late July, 2022. 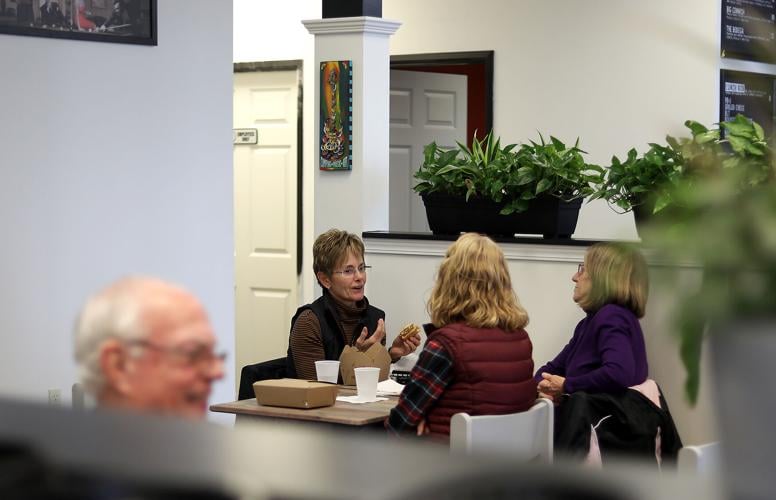 From left, Cindy Brengarth enjoys lunch with friends Margie Andersen and Carol Heim at Old Neighborhood Cafe. Brengarth, who has been a couple of times ordered the Miami Vice sandwich on Monday and said the food is “always good.” 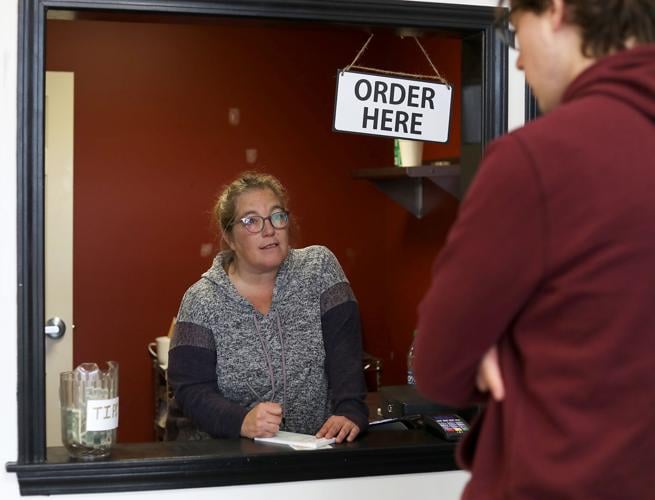 Old Neighborhood Cafe owner Vanessa Leitza takes customer Isaac Parrish’s order. Leitza said she and her son Jake, who she opened the restaurant with, have been in the restaurant business for a long time. “I had a vision– I wanted to be a little more creative,” she said. “I worked at Cooper’s Landing and Katfish Katy’s, and my food was popular, which gave me the confidence to do something on my own.”

Three orders are lined up before being carried to customers’ tables at Old Neighborhood Cafe. Isaac Parrish, who said he frequents the restaurant on a weekly basis, said he loves the food there. A favorite of his is the Mama Leitza sandwich, which was named after owner Vanessa Leitza.

From left, Cindy Brengarth enjoys lunch with friends Margie Andersen and Carol Heim at Old Neighborhood Cafe. Brengarth, who has been a couple of times ordered the Miami Vice sandwich on Monday and said the food is “always good.”

“I just threw this together” is a common sentence Vanessa Leitza says after making some of the most complex meals in Columbia. As co-owners and a mother-and-son duo, Leitza and her son Jake use their passion and creativity for food and serve it right back to their customers as the co-owners of the Old Neighborhood Cafe.

When it comes to food, Vanessa’s grandmother was her biggest inspiration. From sending her home with bags of groceries to guiding her through a recipe over the phone, Vanessa quickly discovered her newfound passion for food. “As I grew up, and got older, I realized that food actually really does bring people together,” Vanessa says. “It's sort of our essential universal language."

The Leitzas used to work at the Station House at Katfish Katy’s in Cooper’s Landing, but the atmosphere of the restaurant didn’t have the family-style community they wanted. After Katfish Katy’s closed at the beginning of 2022, the Leitzas opened their own brick and mortar in July. They call it the Old Neighborhood Cafe, a deli with the goal of giving customers a taste of home away from home.

“The Leitza family is the typical Italian American family,” says Samantha Olive, who has been eating their food since Katfish Katy’s. “Loud, passionate, fabulous cooks, and the most selfless people you can meet. It’s amazing to watch Vanessa and Jake grow and have something that is their own all while remembering why they wanted to open a restaurant—because of Grandma Theresa.”

The cafe serves mostly sandwiches, soups, burgers and salads with a charcuterie board and catering business on the side. They base all of their meals on a different city in the United States. The Aunt Loretta is a Chicago staple, which is where the Leitzas are from. They have a Bodega sandwich for the New Yorkers, and a Miami Vice sandwich based on the famous Cuban sandwich.

“Columbia is such a melting pot of people that came to Mizzou and just decided to stay or relocate,” Vanessa Leitza says. “We just really wanted to help bring everyone's favorite comfort food under one roof.”

Based on their favorite restaurant in Chicago, The Leitzas intentionally designed the Old Neighborhood Cafe to be an open-concept restaurant to give customers the chance to interact with the cooks. They were also inspired by the comfortability and the way the employees treated all the customers as old friends, even if it was their first time there. The same energy is brought to the cafe with the help of the strong community the Leitzas have been building for years in Columbia.

“If it was just the food, I don't think it would be the same place,” Cassi Cody says, another regular who has known the Leitza’s for years. “It's this family that really cares about their business, their customers, the food, the product, their creativity and their drive for growth. They have these amazing ideas that nobody else in Columbia is doing.”

Autumn Leitza, the daughter of Vanessa and sister to Jake, is both the head of the restaurant's marketing and the charcuterie board business. “Growing up, my parents did not have a lot, but cooking was something my mom had a great passion for and hoped one day she could use her skills professionally and make a name for herself," Autumn says. "Because of that, among other things, Jake learned his work ethic and how to persevere despite the odds. That is our dream come true. Years of hard work turned into a new life for our family and now we have a space to show who we are through the love of cooking and food."

Autumn explains that seeing the Old Neighborhood Cafe sign everyday is a reminder of years of hard work, failures, successes and fun. The community they have built, the atmosphere they provide, and the food they serve reflects it with a certain style that only the Leitzas have.

Carlito's Cabo, the food with an attitude