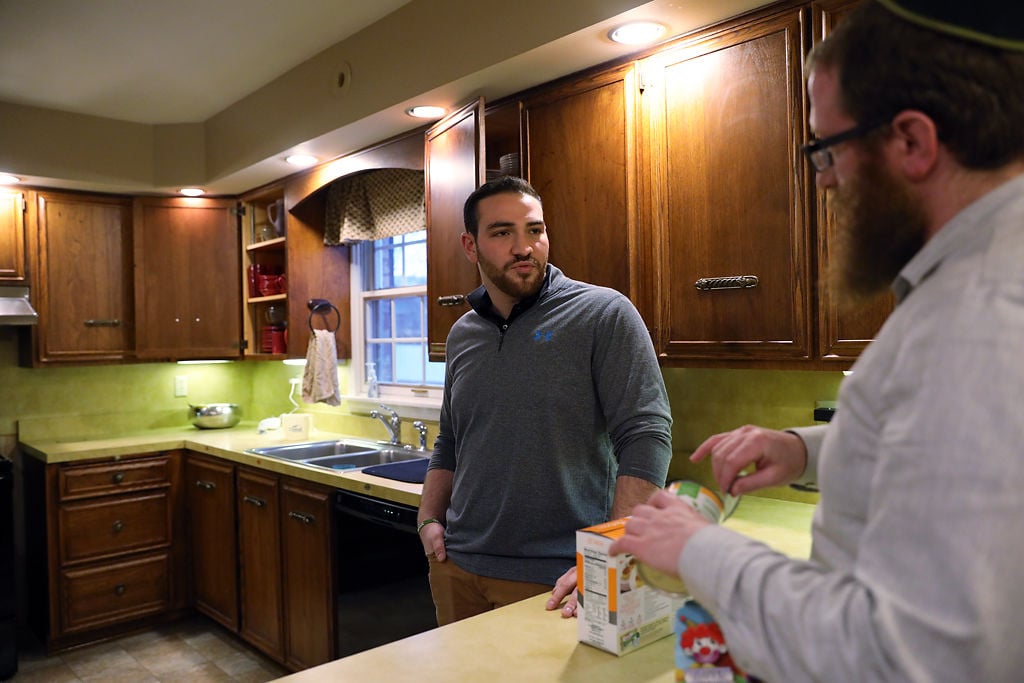 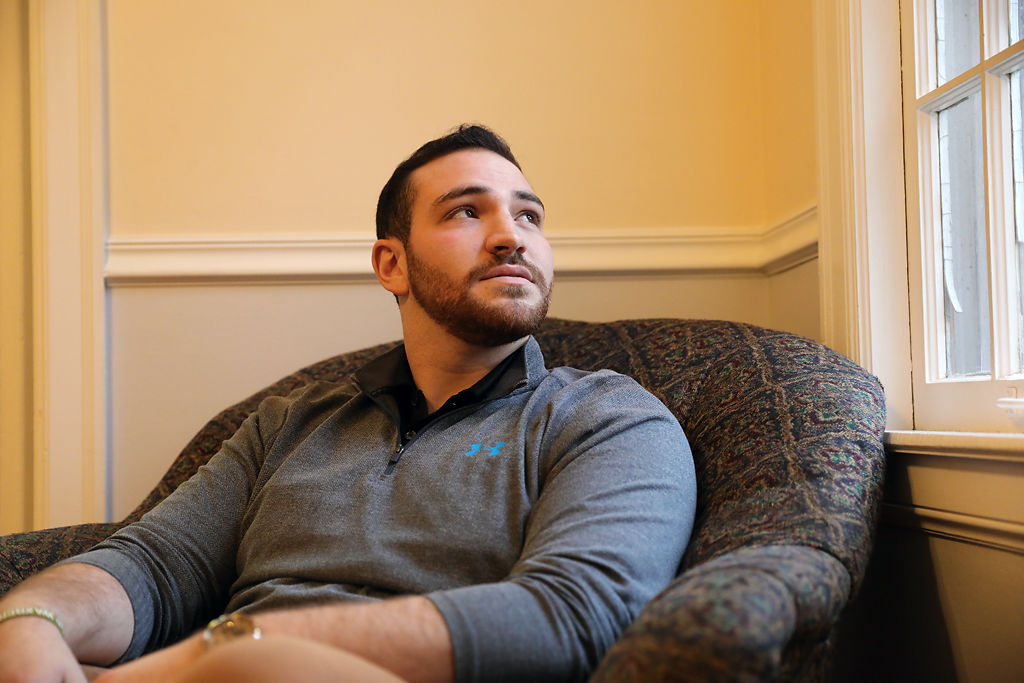 Jason Peiser, a business management major at MU, was originally drawn to the Chabad House for the food, but three years later it has become a second home to him. The house is kept stocked with kosher food for students to have access to during the week. 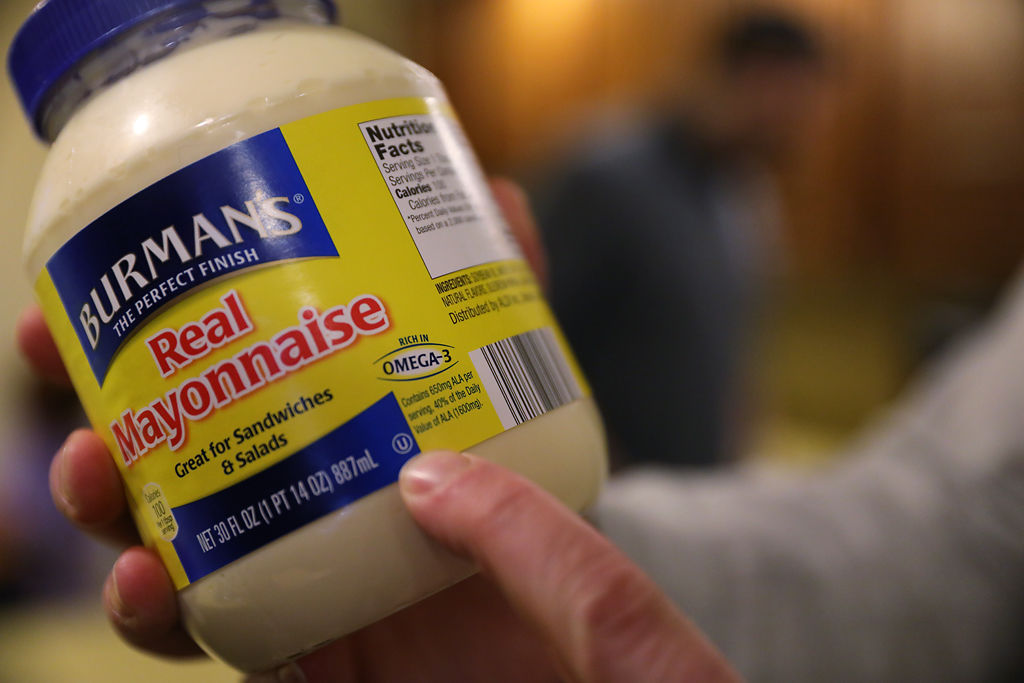 Rabbi Avraham Lapine points out the kosher logo on the Burmans' mayonnaise at his house. 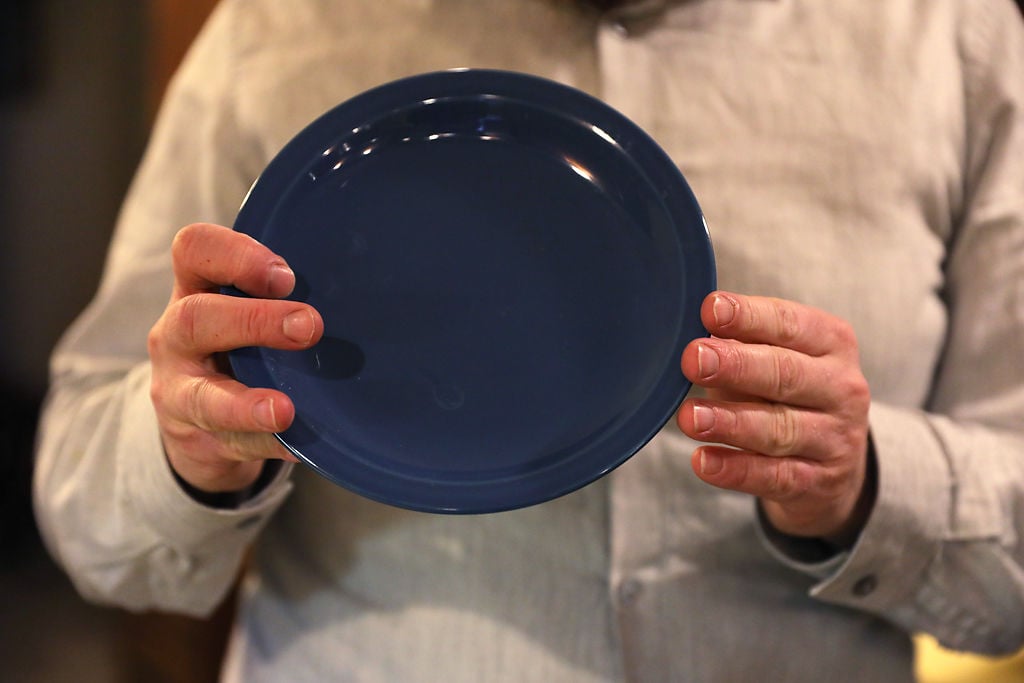 Rabbi Avraham Lapine explains that his family has blue plates for dairy and red ones for meat, and they have to be kept separately at his house.

Jason Peiser, a business management major at MU, was originally drawn to the Chabad House for the food, but three years later it has become a second home to him. The house is kept stocked with kosher food for students to have access to during the week.

Like millions of other Americans, Jason Peiser hosted a potluck for his friends to watch the Super Bowl. Unlike many of those millions, Peiser could only eat two of the many dishes laid before him. Peiser, a senior at MU, is Jewish, and he’s keeping kosher.

Food trucks, dining halls and restaurants are increasingly catering to dietary restrictions, gluten- and dairy-free, for example. However, religious diets such as kosher are harder to maintain, especially in smaller cities. Mizzou Hillel, a group dedicated to enriching the lives of Jewish students, estimates that there are only 700 Jewish undergrads at MU. That accounts for just 3 percent of the student population.

Peiser is currently the president of Chabad Mizzou. The Jewish organization runs through The Chabad House, which is open 24 hours and holds Shabbat dinner, which occurs every Friday. Despite his many years of involvement in the Jewish community, Peiser considered himself a secular Jew and ate whatever he wanted. That all changed with an enlightening trip to Jerusalem last summer, which motivated him to become more observant.

Rabbi Lapine and Mizzou Hillel’s Jeanne Snodgrass explain the nitty-gritty of eating kosher. The word kosher actually means that it’s fitting for a Jew to eat. Here are a few products that are kosher.

Produce: Fruits and vegetables. Greens are washed and checked for bugs, which aren’t permitted to be eaten under kosher law.

Packaged goods: Products are marked with a “U” or “K.” These are called hechshers and signify they’re kosher. Rabbis who are part of koshering organizations go to where the food is being produced, harvested or cooked to ensure it meets all requirements.

Fish: Only fish that have fins and scales are kosher. This rules out shellfish and catfish, for example.

Meat: Animals that have cloven hooves and chew their cud (when animals chew digested food a second time) are permitted. “A pig has split hooves but doesn’t chew its cud, so it has half the signs of a kosher animal, but it’s not kosher,” Lapine says.

Dairy and meat: Meat and dairy cannot be mixed under any circumstances, though each can be eaten separately. “So, you can’t have a cheeseburger, even if all the ingredients are kosher,” Lapine says.

Sarah Kusnitz, another MU student, is currently studying at Hebrew University in Israel. She went to a Jewish boarding school and remained active at MU by joining Jewish sorority Sigma Alpha Epsilon Pi. Like Peiser, she became a member of Chabad Mizzou.

For both students, keeping kosher at MU has been difficult. Kosher meat is hard to find and expensive. Peiser’s unconventional route to kosher living has come with some added challenges. “For the first 3 ½ years at Mizzou, I ate everything, so I know what I’m missing by not eating meat out at restaurants or eating pork,” Peiser says. He’s resigned to eating most of his meals at home. “If I don’t have meat, I can’t just run to the store and buy it,” Peiser added. He must either make the drive himself or wait for Rabbi Avraham Lapine, Chabad Mizzou’s rabbi, to bring him meat from Kansas City or St. Louis because Columbia doesn’t have a kosher butcher.

To help cope with the inconvenience, Peiser allows himself to eat out but chooses vegetarian options. “At home, I won’t mix dairy and meat, and I won’t eat meat that’s not kosher,” Peiser says. Kosher diets typically include these stipulations due to concerns over contamination, but Peiser doesn’t keep strict kosher. “Every rabbi will say you have to ease into it,” Peiser says. “If you go from being totally secular to all of the sudden you’re growing a beard and keeping strict kosher, it’s going to scare you away.”

Kusnitz, however, does adhere strictly to a kosher diet and says she sees it as a way to bring Judaism into every aspect of her life and feel a sense of community.

Though there are different reasons people choose to be kosher, Rabbi Lapine explains that the concept ‘you are what you eat’ is relevant. “You are affected by the food you eat. Therefore, God doesn’t want anyone to have any negative attributes, that’s why all the animals that are kosher are only tame animals, not wild carnivores,” he says.

Both students use the value behind keeping kosher as motivation. For Peiser, it’s about following what “the holy Jews in the past did.” At MU, those keeping kosher are challenged by inconvenience, a lack of options and a small Jewish population. That struggle, however, is part of what brings them closer.  

Four Passover recipes to finish out your week

Substitute cauliflower in recipes for a healthier option