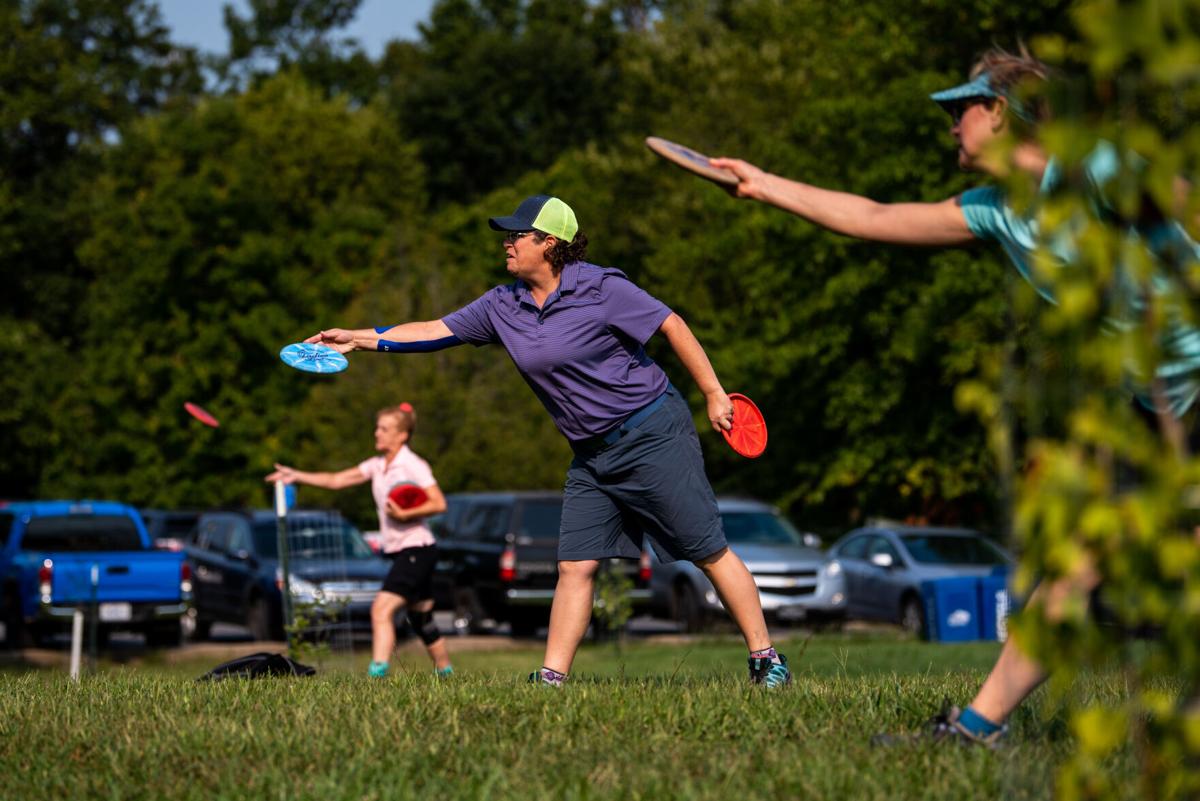 Tracey Lopez from Davenport, Iowa, warms up for a September tournament with other competitors in the Pro Masters Women 50+ division at Indian Hills Park. She finished the Tim Selinske U.S. Masters tournament in fifth place. 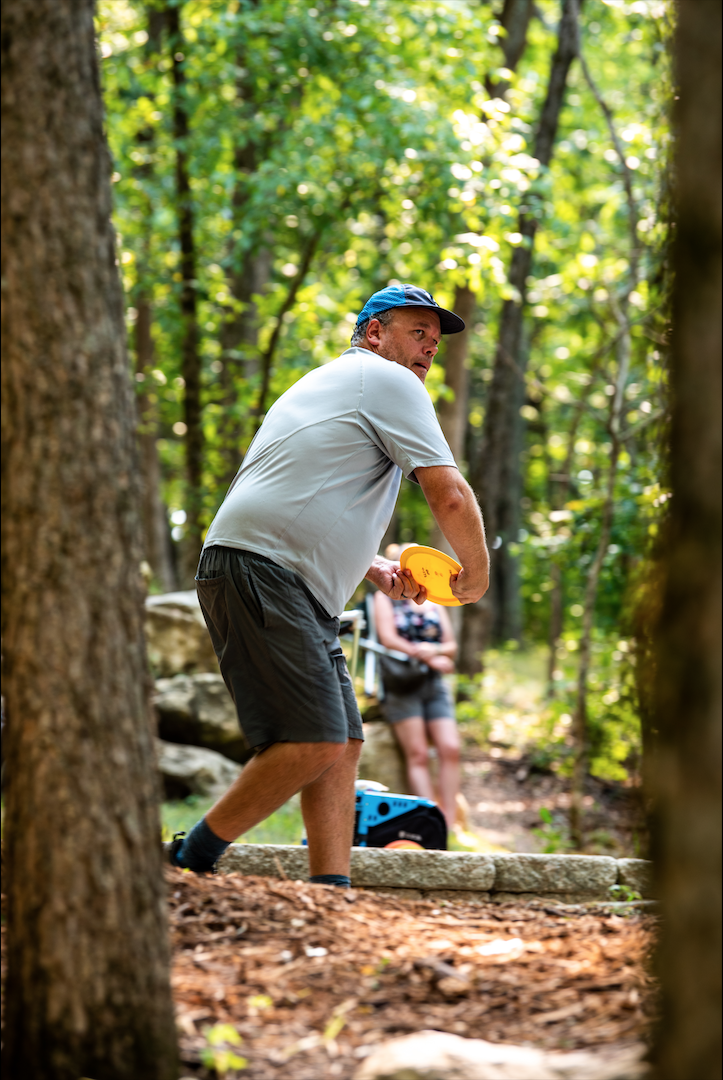 Greg Friestad from Iowa City tees off at Harmony Bends, the course at Strawn Park that is designed for high-level competition. Playing in the 50+ division, he finished the U.S. Masters tournament in 20th place in the Pro Masters 50+ division.

On any given afternoon at Strawn Park or Albert-Oakland Park, you might hear the clattering of plastic discs against dangling chain links and metal baskets. These are the sounds of an up-and-coming pastime: disc golf.

Disc golf is one of the fastest-growing sports in the world with a 33% increase in games played from 2019 to 2020, according to the popular disc golf app UDisc. With four courses that offer varied environments and difficulty, Columbia has become a hub of professional and amateur disc golfers alike.

Disc golf, much like traditional golf, is played on an 18-hole course. Players fling discs into metal baskets, which are this sport’s version of holes. Full games can be finished in around an hour.

Many of the city’s ardent disc golfers are members of Columbia Disc Golf Club. Established in 1983, the organization found its place in the community not long after the city welcomed its first disc golf course in 1980 at Albert-Oakland Park.

The club boasts 1,700 members in its Facebook group and has hosted high-profile competitions, such as the Tim Selinske U.S. Masters Championship tournament, which is sponsored by the Professional Disc Golf Association and took place in September.

Joe Douglass is president of Columbia Disc Golf Club. He says people travel to Columbia from outside the city, state or even farther to play at Harmony Bends, the championship-level course at Strawn Park. “I’ve met people there that came all the way from England to fly it,” he says, noting that people from Canada have ventured here to play, too. “It’s definitely a destination course. It’s on a lot of people’s bucket lists.”

To some, the recreation has served as a gateway into athletics, competition and, by extension, community. “I never thought I’d play sports,” says CDGC member Tonya Amerson. “And I love it. And I’ve met so many amazing women from different careers and different backgrounds. It’s awesome.”

Another aspect that makes the sport more accessible is its low cost. “That’s the beautiful thing about it,” member Dave Kennon says, who has a practice course in his backyard. Unlike normal golf, players don’t have to lug around 14 separate clubs. Instead, the disc sport features four general categories of discs. The “putter” is a slower disc that travels less distance and handles much like a Frisbee. It’s easy to control, which makes it friendly for newcomers. The “driver” is much thinner and more difficult to control but can also fly much farther. Two versions of the driver exist: distance and fairway, with the former possessing the most potential for speed and distance. Finally, the “mid-range” is what it sounds like; it travels farther than the putter but not as far as either of the drivers.

“Absolutely have a putter,” club member Vince Kovacs says to newcomers. “And some patience, and humility.”

But the name of the game lies in the course layout. In that respect, Columbia offers plenty of variety. Two of the city’s courses are at Albert-Oakland Park, with each divided into upper and lower levels. The two others are at Indian Hills Park and Strawn Park.

Kovacs says the upper course at Albert-Oakland is the most beginner-friendly while the lower one requires players to stretch their drives over longer distances.

Indian Hills Park is a more technical course and features obstructive trees. In contrast, Harmony Bends is the most challenging course, with clear out-of-bounds areas and changing vertical terrain, keeping each hole fresh.

“I feel like Indian Hills can be harder than Harmony Bends,” Kovacs says. “It’s shorter, but it’s a little tighter. I feel like if you’re really having a rough round at Indian Hills that they can take your lunch money.”

For new players in particular who haven’t explored each of the town’s courses, Kennon recommends downloading UDisc smartphone app.

Find the right running shoe for you