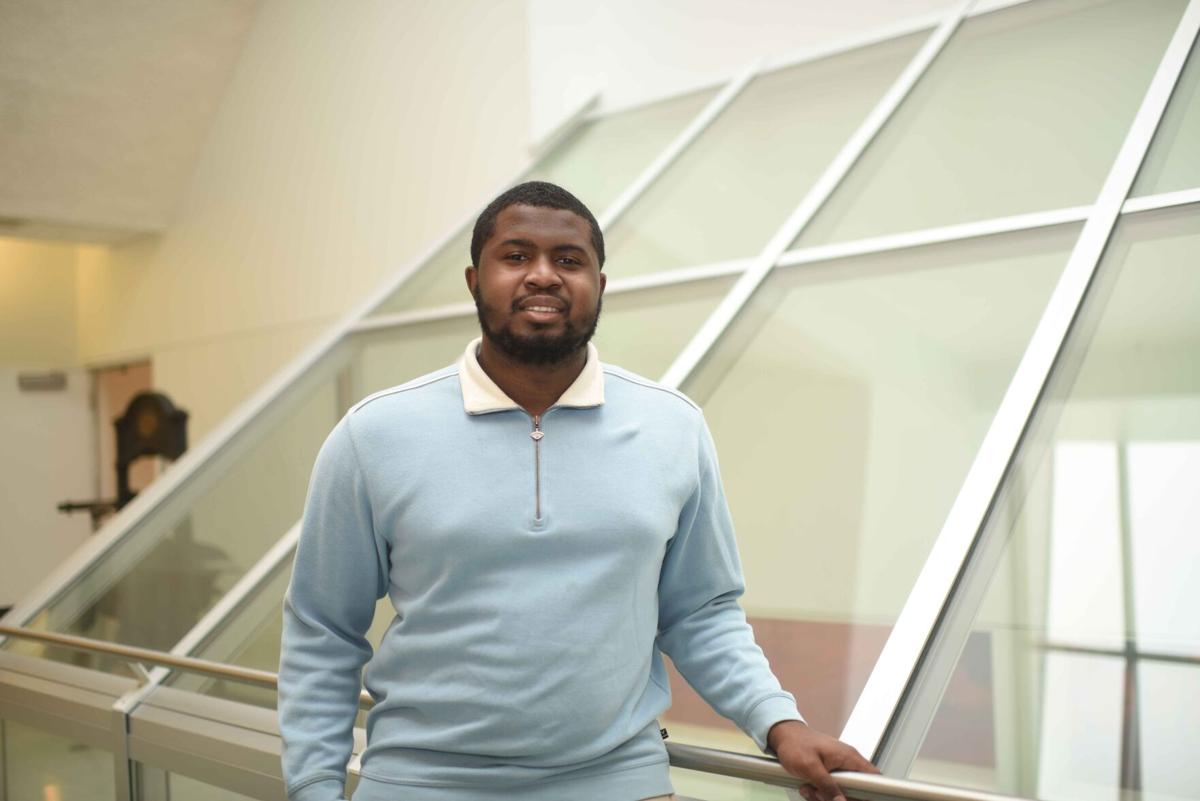 Tyler Hollins is an MU senior studying sports journalism. He voted absentee this year in his home state of Texas. 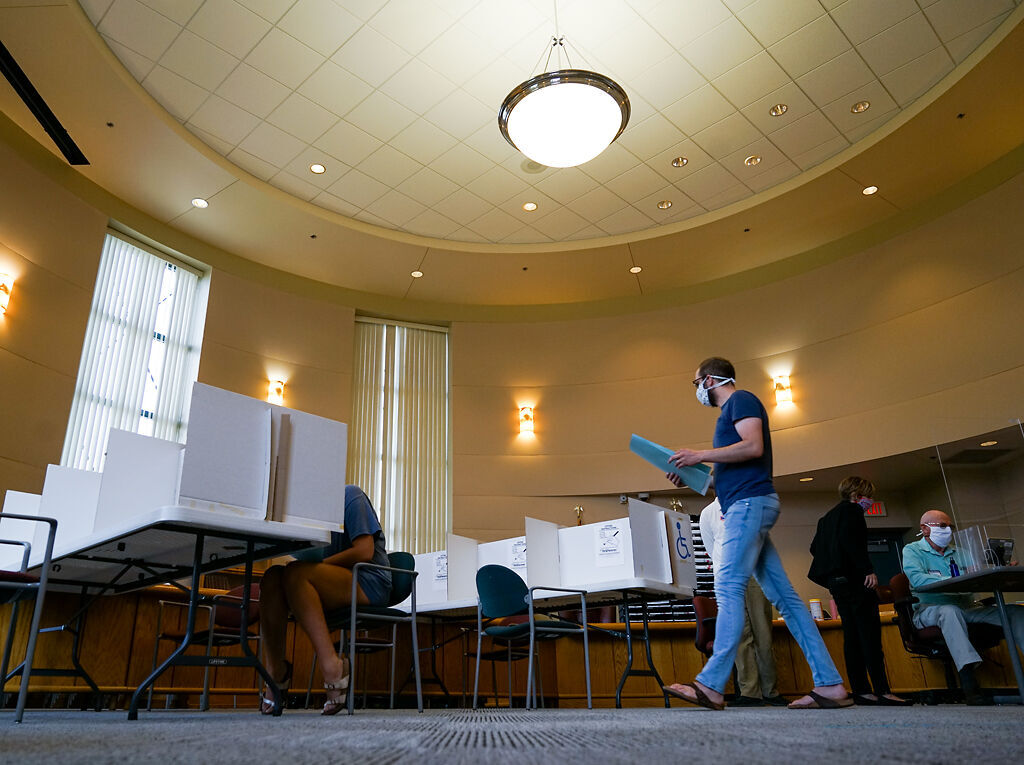 John Fifield prepares to fill out a ballot in the August elections at the Roger B. Wilson Boone County Government Center.

I never had a formal, or even informal, introduction to politics. I simply never felt the need or desire to participate in those conversations.

I grew up in a household where political awareness and debates weren’t encouraged. If my parents favored certain politicians or initiatives, I was oblivious to it. I didn’t engage in political discussions with friends or arguments with strangers on social media. I kept my thoughts to myself. I never felt I was doing something wrong by not voting. I believed the less I engaged in politics, the less those politics could have an impact on me. I was wrong.

The past four years have been politically instrumental for me. Not because of who is or isn’t in office, but because of my own personal growth.

Growing up in a Black household, my family didn’t talk about voting. I was raised to never inquire about religion, politics or money. These were foreign conversation topics. My parents voted, but they never talked to me about its importance even as I became a young adult. It just wasn’t common to speak about voting around other Black people.

Show me the ballot

As of October 2, more than 4.2 million Missourians were registered to vote, up 1% from 2016, according to the New York Times.

In the 2016 general election, only about 55% of the voting-eligible population cast ballots. I wasn’t among them. But once the votes were counted, I felt called out. Whether on social media or television, all the talk was about why people hadn’t felt the need to vote and how Americans’ lack of interest contributed to the outcome of the election.

I suddenly felt guilty, and as that feeling became insurmountable, I called my dad.

We usually talked about the same subjects. Sports ruled many of our conversations, with my dad raving about the Louisiana State University Tigers and me talking about my hometown Houston teams. But now, there was something else on my mind. I spoke to him about politics. I talked about why I wasn’t registered to vote and asked if this bothered him. My dad was speechless. He wasn’t upset I hadn’t voted; he was amazed that I brought it up.

I believe the history of African American voting and voter suppression plays a big role ­­­in the lack of communication about politics and voting. African Americans never truly had a formal introduction to the American political system.

The 15th Amendment extended the right to vote to Black men in 1870, but Black women weren’t allowed to vote until the passage of the 19th Amendment in 1920. Even then, African Americans faced discrimination through measures such as poll taxes and literacy tests.

The 24th Amendment and the Voting Rights Act of 1965 banned many of these voter suppression tactics, but strict voter ID laws and their effects still play a role in the Black community. African American voter turnout was down 5% in 2016. I’ve seen that many Black voters lack hope and won’t show up at the polls because they believe that the issues facing African Americans will never be taken care of, regardless of the candidates on the ballot.

I wasn’t interested in the general election in 2016. I watched the debates occasionally, but only for comic relief. I never once viewed them and wondered, “Who would I vote for?” I had already made up my mind that I wasn’t going to vote. I didn’t think my ballot mattered.

I wasn’t alone. The Pew Research Center polled registered voters about why they didn’t vote in 2016. The second leading reason was the belief that their votes didn’t make a difference.

Election time brings political coverage to the forefront on social media, and although I lacked the urge to vote or even discuss the election, many of my peers did not. All I saw when I opened Twitter in 2016 were updated Electoral College interactive maps. I would turn to Snapchat and see my friends posing with their “I Voted” stickers. It felt as if everyone I knew had a stake in the presidential election. Everyone but me.

This year has been a crazy one, and if it weren’t for the political unrest and division in America right now, I don’t think I would be pushing myself to vote this year. Even amid a pandemic, social justice movements show how much power people have. After the killings of Breonna Taylor and George Floyd, I saw people collaborate to help spread change and to keep one another safe. Friends took to social media to spread awareness of things we’d never even talked about before, including Black Lives Matter. Topics that previously seemed taboo, such as systemic racism, were suddenly the focal point of conversation around the country.

A common message rang throughout: Vote.

Everywhere I went, the message was there. I saw athletes LeBron James and Chris Paul talk about voting in commercials while I watched the NBA Finals in October. These were my role models. I knew I had no excuse. I had to do something.

Voter turnout among college students increased 70.9% from the 2014 midterm election to the 2018 one; a higher increase than any other age group, according to the U.S. Census Bureau.

The stakes are too high. I decided that in one of the most trying times in American history, taking advantage of the opportunity to vote was crucial. It’s something I can’t pass up and turn a blind eye to. So, I took action.

Just like in 2016, I called my dad. This time, it wasn’t after the election, but months prior.

We spoke often over the following weeks, working through the process of voter registration. In October, we put the finishing touches on applying to vote absentee in Texas, and I mailed in my ballot Oct. 13.

I voted absentee because, like many students, I decided to leave my home state for college. However, college students aren’t the only ones taking the vote-by-mail route this year. Many Americans are voting absentee due to COVID-19.

This fall, 84% of registered American voters are eligible to cast a ballot by mail, but some states still require a reason beyond COVID-19 concerns. Although 23 states and the District of Columbia changed such voting restrictions, five have not.

As of Oct. 22, more than 84.6 million absentee ballots for the general election had been requested or sent to voters in 44 states and the District of Columbia. This will crush previous records for voting early or by mail. Just over half of college students plan to vote by mail or absentee.

Despite the increase in absentee voting, uncertainty surrounds the process.

President Trump and others questioned the validity of voting absentee. However, studies have found little evidence that mail-in ballots benefit one party over another. Of the 16 states where more than half of voters voted by mail in 2016, President Trump won nine. Several Republican states such as Iowa, Missouri and Alabama expanded mail-in ballots this year. But I trust the mail-in system and am glad to be voting absentee.

The process of voting by mail wasn’t necessarily exciting. I filled out and signed paperwork, then mailed it back. I didn’t get a sticker, but knowing my vote was cast was plenty gratifying. Like getting your first car or cashing your first check, there’s nothing like doing something for the first time. I encourage everyone who is registered, especially young adults, to find a way to vote.

Although I wouldn’t consider myself well-versed in politics, I do understand the importance of voting. Not only because of what’s at stake, but because that right shouldn’t be taken for granted.

The beautiful thing about America is that you are able to have a say in situations like this. It’s important to express your opinion. I’m glad I finally did.