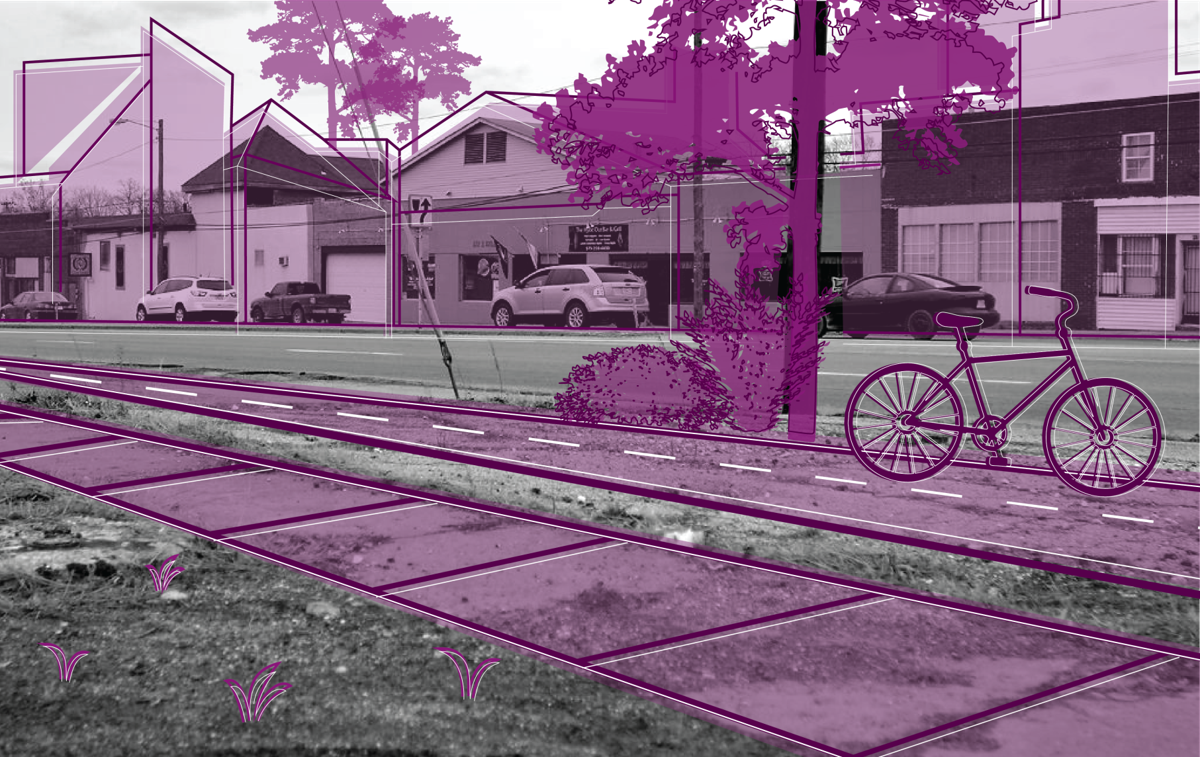 It’s an odd thing to wait for someone in a sex shop, politely perusing the vibrators with the middle-aged white ladies here on a weekday afternoon. James Roark-Gruender, a giant man currently wheeling and dealing on the phone behind the counter, is the owner of Passions in Columbia. After a few minutes he hangs up and apologizes. “Ready for the tour?” he asks.

As he’s leaving the shop, Roark-Gruender grabs a tester packet of flavored lubricant from a basket by the counter and shoves it in the hands of a confused woman waiting at the register. “Take it! It’s free! Stick it in your purse!” He bellows over his shoulder, and the bemused blonde takes them as he walks out of the store.

Roark-Gruender hops in his SUV to take a tour of the street his store occupies: Business Loop 70. As the chair of the board for The Loop Community Improvement District (CID), he has a grand vision for the future. He considers himself a face of the street, just like the Loop is one of the many faces of Columbia.

“You’ve got seven exits into Columbia, and almost every one of them crosses the Business Loop,” Roark-Gruender says. “This is what people see when they first come to Columbia.”

And it’s a mean mug to put forward. No sidewalks, decrepit buildings, pawn shops and title loan companies galore. The Business Loop’s rough appearance is the result of decades of reliance on cars as the vehicle of the future; shop fronts practically open into traffic in some spots. Back in its heyday, the street was a center of economic development, and starry-eyed entrepreneurs saw it as the future of Columbia at the edge of town. The Business Loop is the original Highway 40, which traversed the entire continental U.S., so it carried a lot of through-traffic at the time. That traffic brought businesses and life to a part of Columbia that used to be farmland, says Dave Griggs, former owner of the carpet store Dave Griggs’ Flooring America on Business Loop. He says the street used to mean a lot to him. “Even as early as the '50s, when dad and I would go to town to get feed for the dairy cows, we would stop at a little place, which literally is right across the street from my former store, called the Silver Griddle, and have breakfast on Saturday morning,” Griggs says. “Truly, it was kind of the business center of Columbia. Hotels, motels, automobile dealerships, shops, farm equipment dealers, all kinds of restaurants.”

Check out the plans for improvement of @TheLoopCoMo! #ShopLocal https://t.co/dWAnoOYVKz

But the buildings along that hopeful street haven’t changed much since then, and that era of expansion led into an era of decline. The new businesses brought more traffic, and the traffic caused engineers to widen the street. “The business buildings are where they were built in the '40s, '50s and '60s, but the highway is 2-1/2 or 3 times wider than it used to be,” Griggs says. “By reducing the setbacks, and by eliminating a lot of landscaping just because of growth of traffic, the Business Loop’s appearance suffered.” Today, many of the Business Loop’s buildings are hunched over the sidewalks.

Griggs says the business owners on the Loop started to feel like they were on their own. About 15 or 20 years ago, Griggs and another business leader tried to round up enough interest to form a CID to help improve the street. “I don’t want to say ‘save the Loop’ — but to at least stop the decline,” he says. “We could not drum up any interest hardly at all, so that deal just kind of went by the wayside.”

But the Downtown CID, formed in 2011, showed how that kind of organization could be a path to success. The naysayers started to see the benefits of banding together to fix up the street. In 2015, the City Council voted to form The Loop CID, and businesses along the street agreed to a sales tax increase to make their neighborhood nicer the same year. “These people are willing to put their money where their mouth is to get things done,” Griggs says. “And when you come to the city or the state and say we want to help you do something, and we’re willing to pay for it, you get a lot more attention.”

After years of neglect, the Loop finally has some momentum. The CID is trying to reverse the trend of wider streets and no sidewalks and take back The Loop from cars. CID’s executive director, Carrie Gartner, wants to turn this “5-cent version of a highway” into a bike-friendly green corridor where people actually want to spend time. Despite the fact that Gartner wants to make the Loop more walkable and bikeable, the neighborhood will retain its industrial character. “What we’re looking at is makers and artisans and small-scale manufacturers and creative industries,” she says. “So if we can be a hub for where makers come, that would be exciting. What we do is we backfill the infrastructure, we add more sidewalks.”

As Roark-Gruender drives around, he points out parking lots that could house new buildings for artisans. As he cruises past MU’s North Campus, he indicates a field in front of the building’s parking lot: “Wouldn’t this be a great place for a little amphitheater, out here in the green space?” he says. The old campus will soon have a commercial kitchen in the basement, he says, an opportunity for entrepreneurs to produce foodstuffs for commercial sale.

But there are a lot of hurdles for the CID to overcome before it can institute its 10-year, $15-million master plan. The road belongs to the state, and Missouri Department of Transportation doesn’t have much money for road improvements. And the city can’t exactly take over the street, Roark-Gruender says. “They don’t have the means. Let’s leave it at that.”

Another problem stops a lot of landowners from building new construction on their properties. “One of the hesitations with building is stormwater; the construction is very, very expensive,” Roark-Gruender says. The 10-year plan proposes curbside rain gardens to deal with flooding, but big stormwater improvements are expensive and will come on a slower timescale.

So remaking the street comes down to small-scale projects often spearheaded by local businesses, such as the Community Pop-Up Park that opened last April in a parking lot, or some sensual street art painted on the side of Passions in Columbia. The long-term master plan includes restriping the street to introduce a bike lane with a painted buffer and adding sidewalks once the unsightly electric lines go underground. Some beautifying natural elements have already been implemented in test cases: Hickman High School students planted purple and gold flowers in fall of 2019.

The full $15 million plan is projected to be completed by 2030; 2050 might see a Business Loop that fulfills at least part of Carrie Gartner’s vision. You can picture it: cyclists biking down the Loop to visit small businesses, new storefronts lining the street, safe crosswalks for the students of Hickman High. And with all the buy-in from local businesses, it seems likely that can happen. Griggs, having seen the street deteriorate for so many decades, has a lot of hope encapsulated in the pop-up park in a parking lot right next to his old store. It’s a friendly space, with a bright blue-and-green shipping container framing a seating area with a patch of artificial turf, outdoor games, flowers in planters and strings of lights hanging above. Dozens of volunteers built the park in spring 2019, and community members often reserve it for events. The CID even does programming for the space. “It’s just really rewarding to see how the Loop has already transformed,” Griggs says. “I can only imagine what the Loop will look like in 10 or 15 years — it will be a great place.”

Leaving the Loop by bicycle, it’s still clear the street has a long way to go. Whatever bike lanes exist now sit squarely in the gutter, and sidewalks are limited at best. No safe cyclist would stay on the street for long. But with a bit of new paint and some TLC, the Loop might really become the street Griggs thinks it can be.

The Columbia Agriculture Park is a hub for community