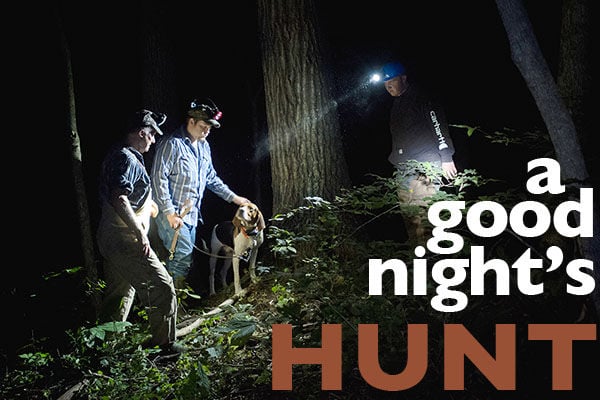 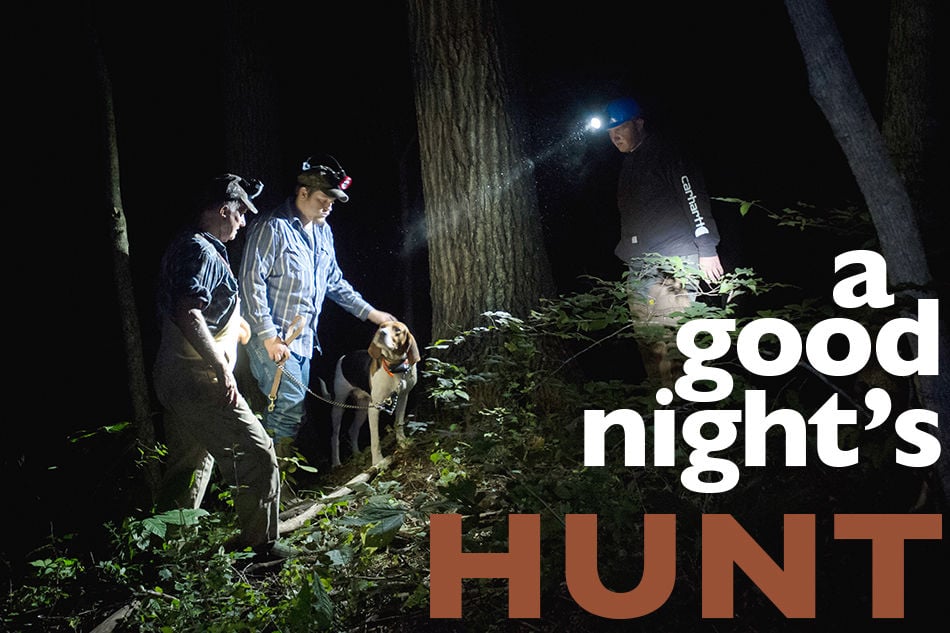 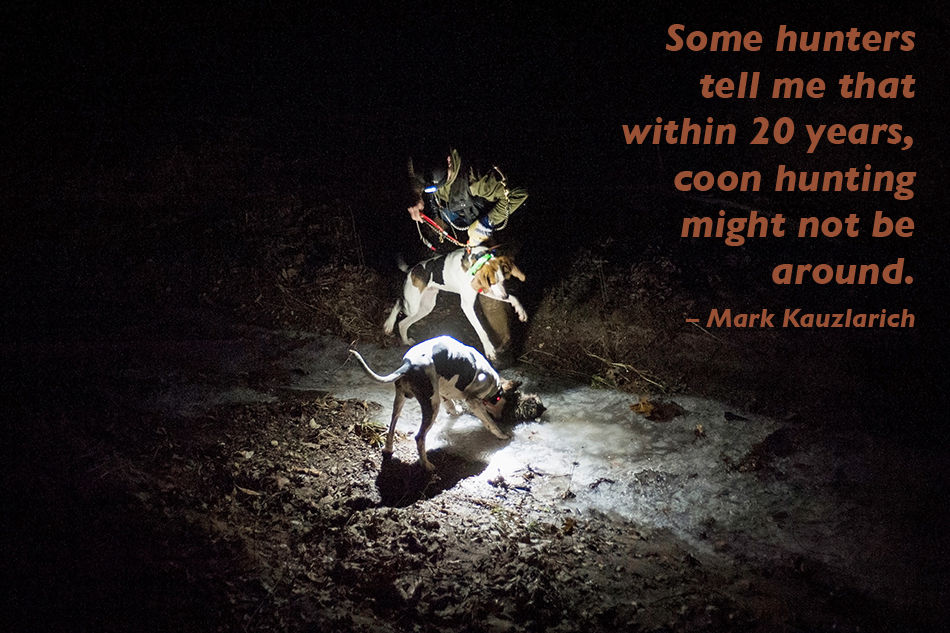 Chris Baker pulls his dog Spot off the body of a raccoon, yelling "dead!", while Slick finishes the raccoon off. Despite the raccoon being hit by at least one pistol round and falling 50 feet into the riverbed, it took a good 30-second fight with Baker's dogs. 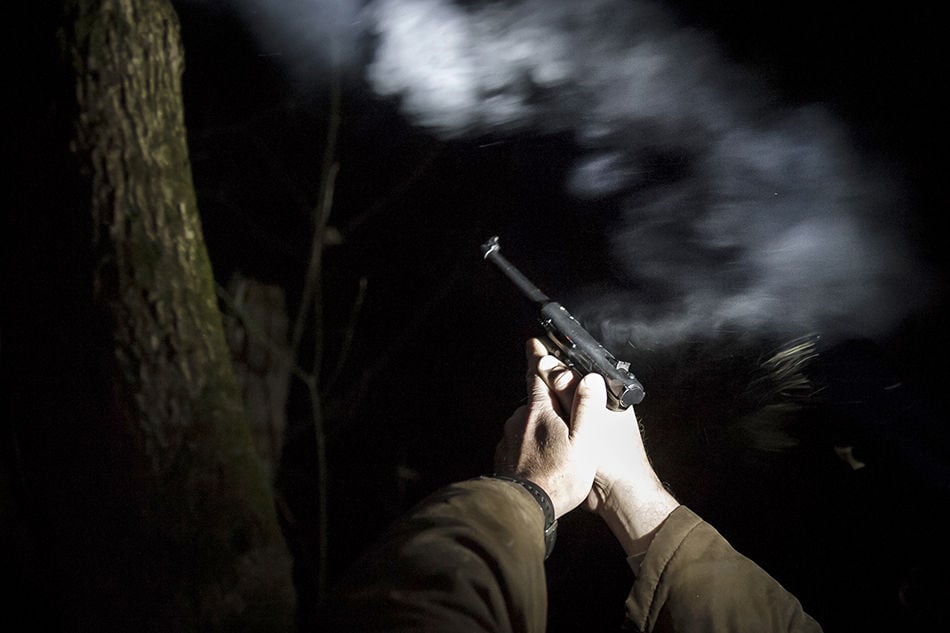 Chris Baker shoots his Ruger .22-caliber rimfire pistol at a raccoon that his coon dogs chased up a tree in a technique called treeing. 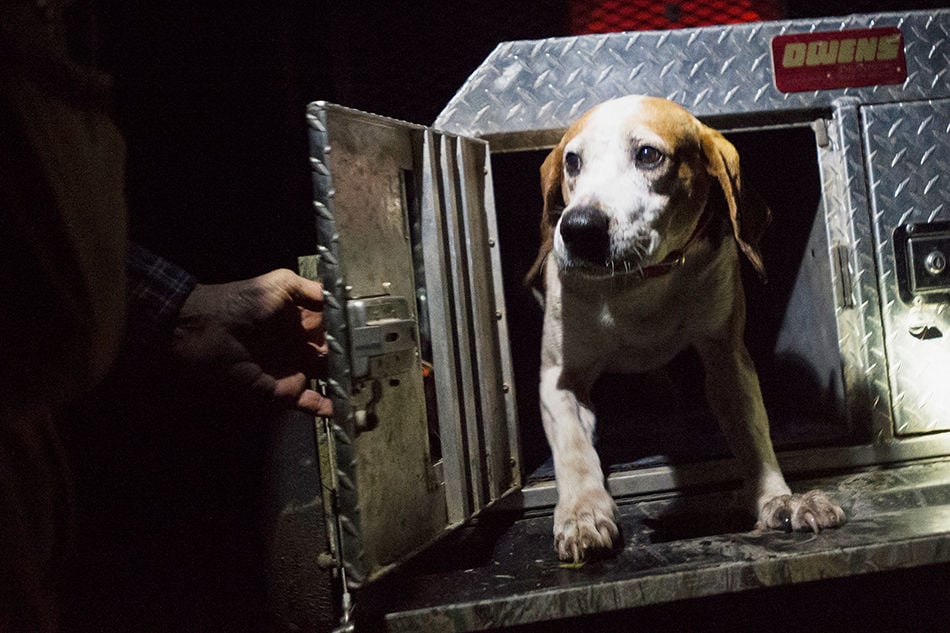 Mike Shannon’s newest coonhound, Buddy, hesitantly steps out of a dog box for one last hunt of the night outside Hannibal. Buddy qualified for the Professional Kennel Club World Championship only a month after Shannon purchased the dog. 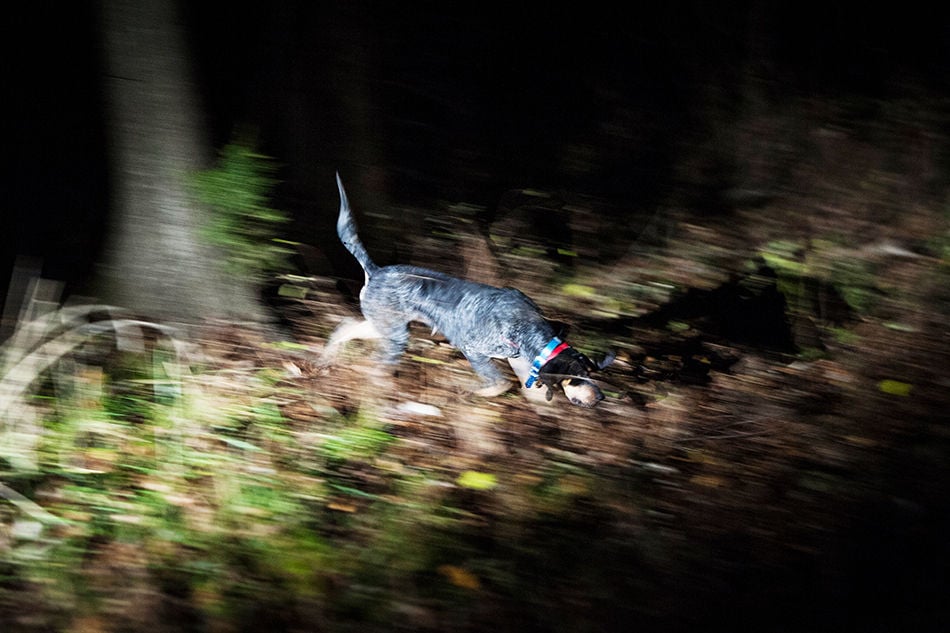 A bluetick coonhound belonging to Paul Vaughn tracks a scent along the forest floor on a farm near Stover. Hunters often gain permission to use farm land for hunting because local farmers don’t want raccoons foraging on their crops or spreading disease to livestock.

Story and photos by Mark Kauzlarich

The sound of cracking branches mixes with a cacophony of barking dogs in the chaotic pitch black. The shot of a .22 Ruger suddenly punctuates these sounds, and the weight of what must be a 15-pound raccoon hits me on the head as it falls off a nearby tree.

From where I was standing, I thought I’d be safe from becoming a falling raccoon’s target. But the Plinko-like effect of the injured raccoon bouncing off the branches proves I was wrong. The hunter, Chris Baker, calls out to make sure I’m OK before he releases his dogs to go after the raccoon. I shake myself off. I’m fine, though splattered with a bit of raccoon blood.

When I ask Baker later if this misfortune occurs often, he says: “Yeah, once or twice. Glad you’re not hurt.”

That was my third outing after a year of following sportsmen who hunt raccoons in the mid-Missouri area. Coon hunting as a sport dates back to the 1800s and lends its name to the various breeds of dogs called coonhounds.

It has a following of Missouri hunters all over the state, and I tag-along on some of these hunts. I hooked into the network of Missouri coon hunters, and recorded the sights and sounds of their late nights spent hunting these nocturnal creatures.

Some hunters tell me that within 20 years, coon hunting might not be around. What was once a lucrative sport in the ’70s and ’80s has dwindled into something solely recreational. After a drop in pelt prices in the ’90s, hunters didn’t pick up the sport at the same rate as in the past.

In my time spent in the forests and fields of Missouri with some of the last practitioners of the sport, I came to consider coon hunting an art. It has style and nuance in training and execution.

Most of the year, hunters run their dogs multiple times a week to keep their senses acute and ready for competitions that bring hunters both money and prestige. From Nov. 15 to Jan. 31, hunters take to the woods in pursuit of raccoons. Later, they sell the pelts at auctions to provide supplemental income and offset the cost of raising the dogs.

By day, these hunters are skilled laborers, truck drivers, gravediggers and more. They are passionate outdoorsmen who breed, raise, train and care for coonhounds. The dogs are used to pick up the scent of the raccoons, chase them and trap them in trees or attack them during the hunt.

Without coon dogs, hunters wouldn’t be able to continue the sport, but the dogs face dangers as varied as car accidents on the roadways, disease, injury and freak lightning strikes. Hunters recognize that these dogs live to work, and their work could cost them their lives.

Some hunters will sell a dog if the money is right and others will make a room in their homes just for their dogs to sleep and play. Regardless of whether they sell or keep their hunting companions, every hunter forges some sort of a bond with the dogs during the spinning darkness and deafening quiet of the night.

Like horses were once necessary to plow fields, these coon dogs are the key to the success of the hunt. They are trained for persistence and their ability to find the right trail. They are hunters’ eyes and noses.

In mid-Missouri, the treeing walker coonhound reigns supreme and accounts for most of the dogs at competitions. But there are those who remain committed to other breeds. For instance, 93-year-old hunter Warren Wilson has been hunting with Plott hounds for his entire career.

There are passionate hunters, some younger than 10, who maintain the coon-hunting tradition across generations. Yet hunter Scott Yamnitz explains why a sport with such strong history and family roots is dying so quickly. “You have people coming in from Louisiana, Arkansas, St. Louis metropolitan area,” Yamnitz says. “What they’re doing is they’re buying up leases. Where before you had 30 places to hunt, now you have nothing.”

These new landowners often buy the land for deer hunting and leave it for the rest of the season, unused. So the demise is rooted in several factors. Coon hunters gradually are quitting, and hunters are running out of places to hunt. Less land also means less room for coon dogs to run and practice their skills. They are bred for competition and can gain skill and run farther as they hunt more. Less hunting means less practice.

If a 70-year-old hunter with bad legs has the perseverance to cover three miles of knee-high brush and climb over barbed and electric wire faster than this 24-year-old photographer, all to get to a coon dog, it’s hard to imagine that a tradition like this could die out.

After listening to the laments of hunters reminiscing after a long night of hunting, nostalgic for the days when they went out in robust groups, you’ll know these hunters aren’t just chasing some small bandit through the woods. They’re chasing the last bits of a storied history of Missouri, perhaps until it’s gone for good.