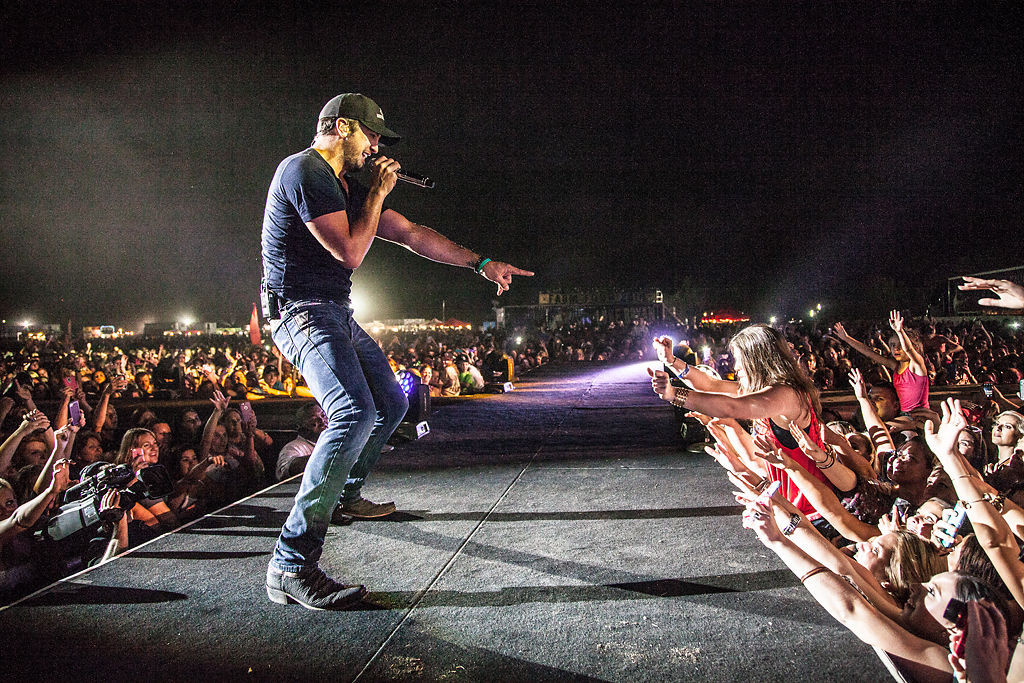 Tracks such as "Play It Again" and "That's My Kind of Night" have corralled thousands of fans and peaked on Billboard's Hot 100. 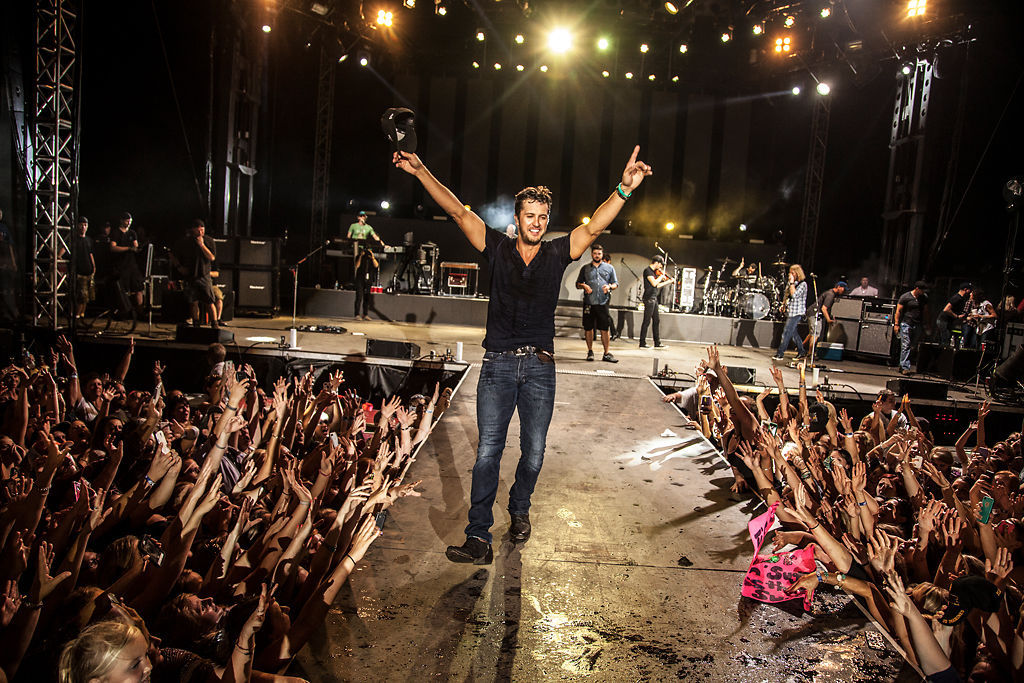 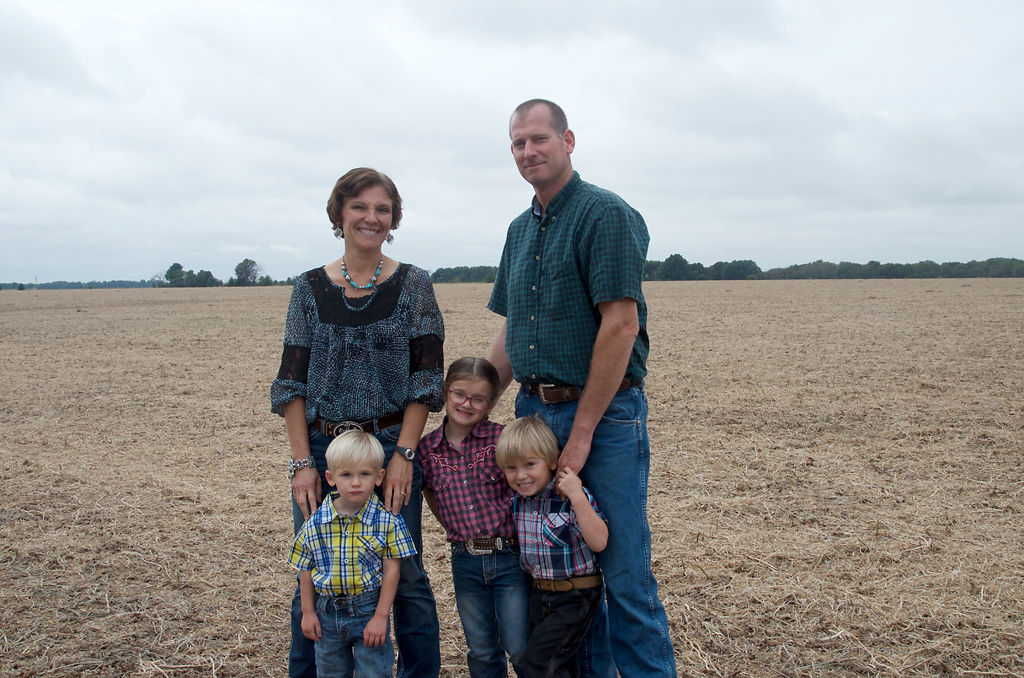 The Stowers family live on a farm in Centralia - here from left to right: Gavin, 2, Kara, Breelle, 5, Garon, 3, and Greg Stowers. The Stowers have contracted out their land for Luke Bryan's first-ever Farm Tour stop in Missouri.

If Luke Bryan wanted a family that exemplified the Farm Tour, it would be the Stowers. They are traditional Midwest in the most delightful way. Indubitably courteous, they smile wide and wave at every passing vehicle, despite an unusual amount of traffic on their otherwise-quiet gravel road on this particular Saturday.

The Stowers are the hosts of the first-ever Missouri stop on the eighth annual Luke Bryan Farm Tour. The eight-stop tour, which runs from Oct. 5 to 15, stops at farms in rural communities. A portion of its proceeds benefit the Luke Bryan Farm Tour Scholarship, a scholarship for students from local farming communities where the concert is performed. By the end of this year, Bryan will have awarded 50 scholarships during the eight years of the tour, representative Jessie Schmidt says.

“It will be nice to get back to my Georgia roots and be able to sit back and listen to music outside at night,” says MU graduate student Lexi Deagen, who will attend the concert. “It’s just what we do at home, so it will be fun.”

In a state chock-full of farms, how was the Stowers’ chosen? Last year, word spread in the close-knit “ag world” that Luke Bryan’s people were looking for a stop in the Show-Me State. The host of the Mississippi show got in contact with the tractor dealership the Stowers use. Farm owner Greg Stowers was initially slotted to be the incognito setup man: the person in charge of discreetly finding a farm that matched Luke Bryan’s specifications. The problem was, a farm like the one his team was looking for — 700 acres of hay fields and pasture — doesn’t exist in this part of Missouri.

“Folks out here don’t have that much land together, and they’re not going to leave it for hay,” farm owner Kara Stowers says. “Our ground is too rich — it’s crop ground, not hay ground.”

Another stipulation was that the farm be no more than 30 miles from MU. This isn’t surprising; after all, the tour is meant to fund scholarships to universities, and a major portion of attendees will be college students. MU’s spot in the SEC was a selling point. According to information Greg received, it was an integral factor in Missouri becoming a stop on the tour. Out of the eight stops, six states are near SEC schools. Luke Bryan is a Georgia native.

The idea of hosting the concert didn’t initially dawn on Greg, who was set to harvest corn this season. On a drive home from Columbia, he looked down at his odometer: 31 miles. He was having trouble finding the right space, and at his own farm, he could control the harvest schedule. So why not pitch his own?

Greg asked for his father’s permission first. The Stowers farm their land with only the help of Greg’s parents, who are both in their 70s. The land has been theirs since Greg’s great-great-grandfather settled it in 1885.

Next was selling the space to Luke Bryan’s people. Greg sent aerial photos to show his land met the other requirements, such as having multiple exits for emergency personnel. In January, the Stowers got the call from Bryan’s tour manager that their farm had been chosen, but under one major condition: They’d have to change their entire seed order from corn to soybean without the guarantee of a concert. Corn fields wouldn’t work, because they can deflate car tires and make it difficult to walk. This is a big deal for a small farm, but the Stowers took the leap.

“That was the old farmer’s shake there — ‘I’m promising you that this is what’s going to happen.’ And we’re going, ‘OK, we hope so because we’re doing a lot, and so here’s our handshake, and now we’re getting beans,’” Kara says with a laugh.

So why do it in the first place? The Stowers made it pretty clear that they relate to Luke Bryan. Greg and Kara met their freshman year at MU’s College of Agriculture, Food & Natural Resources. They’ve worked hard to run their farm and raise their family, even with full-time jobs.

The Stowers reference Luke Bryan’s song “Here’s to the Farmer,” an appropriate ode and self-titled track on an EP for the tour. Greg texted Luke Bryan’s team after he heard it; he felt it so accurately described farm life.

Missouri native Chris Janson is on the tour for his second year in a row as an opening act for long-time friend Luke Bryan, and a stop in his home state holds particular importance. Although he’s excited about having friends and family in the crowd, the most fulfilling part is the scholarship opportunities.

“It’s a big motivation to be a part of (the tour),” Chris says. “It’s an inspiring thing. I grew up in a farm town, grew up around farmers. That’s the lifestyle where we come from and where Luke comes from.”

Although the Stowers haven’t been guaranteed they’ll meet him, Chris says it’s not uncommon for host families to meet him. Here’s to the farmer.