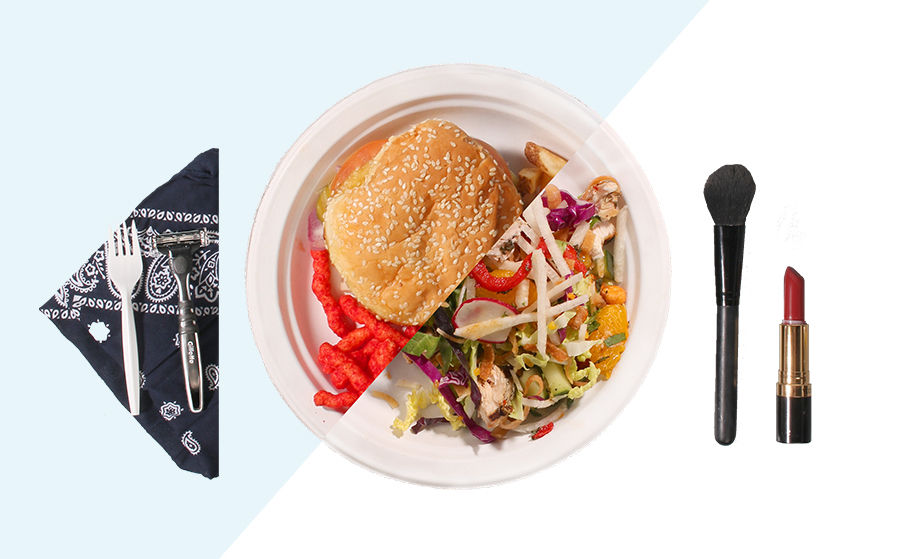 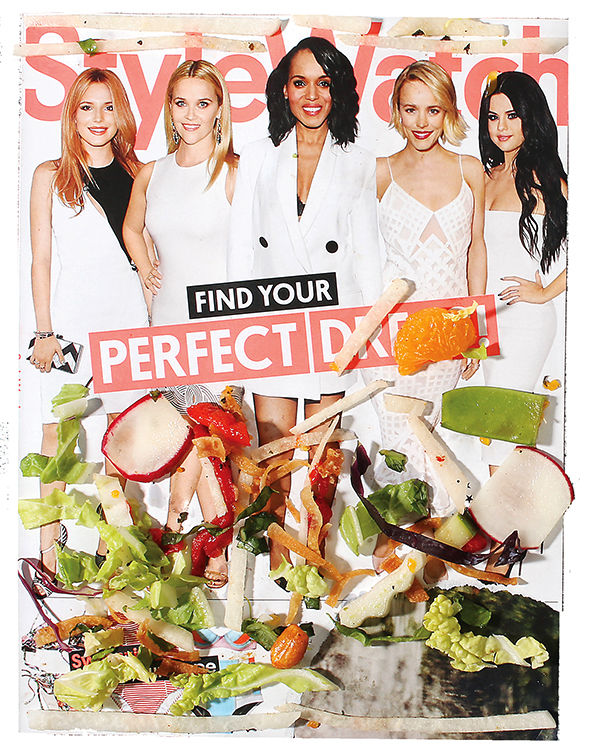 Men get hearty burgers and fries, while women are served dainty strips of fruits and veggies. The stereotypes are reaffirmed by media representations.

All the good stuff. All men’s food.

Women get a salad with light dressing and maybe a low-fat yogurt on the side. If they’re still hungry after that less-than-filling fare, they can seductively nibble piece after piece of chocolate until they can’t resist flashing their perfectly straight, indulgent smiles at onlookers.

Certain foods are regarded as masculine or feminine, a notion often reaffirmed by media, specifically advertisements. But this gendering of foods, which maintains the cultural ideal of the thin, beautiful woman, can have harmful consequences.

The concept of the ideal woman is just one of the many gender norms prescribed by society, and this supposed appropriate role is reinforced and perpetuated from a young age. “The process of gender norms being formed starts very early on, even before the birth of a child,” says Srirupa Prasad, an assistant professor in the departments of Women’s and Gender Studies and Sociology at MU. “It’s easy to figure out the gender of a child, and it’s common to have color themes at baby showers. As soon as a child is born, the process further intensifies.”

Media are partly at fault for bolstering these norms. Advertisements send a myriad of messages about how women and men should act, “telling us what it means to be a girl and what it means to be a boy,” says Cynthia Frisby, a professor of Strategic Communication at MU’s School of Journalism.

For women, this often means being pretty and looking fit. Gender norms dictate that to be a woman in today’s society is to have white teeth, clear skin, silky hair, long legs and a flat stomach, Frisby says.

Thousands of advertisements that feature this quintessential woman are displayed on screens and magazine pages daily. With the average American seeing 3,000 ads each day, their effect is subliminal, according to Jean Kilbourne’s Killing Us Softly 4: Advertising’s Image of Women. Ads have not only helped create the well-formed gender norm of women as healthy, fit and perfect individuals but also continue to support this stereotype.

Men, too, are often categorized as being either overweight, lazy,beer-drinking football lovers or the opposite: ridiculously fit individuals who only leave the gym for the few hours it takes to star in a Calvin Klein ad.

Not surprisingly, advertisers capitalize on these society-boosted ideals in their daily product promotions and frame them specifically for a certain audience.

Food gendering naturally follows. “We are seeing how things as private and personal as meals, food and diet are becoming very explicitly gendered and publicly debated,” Prasad says. What we choose to eat is a seemingly public spectacle.

Men, for the most part, get the beefy, hearty, unhealthy foods. The more steaks, nachos, beers and chips they consume in one sitting, the more macho they seem. Any meat is for men, says Marilyn Morgan, director of the history and archives program at the University of Massachusetts Boston and a summer professor of Gender, Food and Culture in American History for the Harvard Summer School. Junk food is usually marketed toward men in commercials, she says.

Fast-food commercials are guilty of following the meat-is-for-men rule. Taco Bell’s “Girlfriend” ad from 2014 followed a man as he reluctantly shared his chicken wings, chili cheese fries and loaded nachos with his girlfriend.

With women, however, the stereotype of the perfect body dictates another cultural discourse on food. This leads to strongly gendered advertisements, especially with items considered to be healthy eats, such as fruits, vegetables and yogurt.

“Advertisers have their design targets, and that includes gender.” –Paul Bolls, associate director of the Center for Communication Research, professor at Texas Tech University

Yoplait and Lean Cuisine are both guilty of continuing food gendering. One of the yogurt’s 2015 ads stars a thin woman in a pink dress dancing around with her reduced-sugar, strawberry yogurt. She smiles widely when she takes a bite in her all-pink house. The frozen meal company has one from the year prior that features a woman ditching her boring, low-protein diet to enjoy a healthy, microwaved meal while bouncing on her exercise ball — clearly a normal way to eat.

“Advertisers have their design targets, and that includes gender,” says Paul Bolls, the associate director of the Center for Communication Research and a professor at Texas Tech University, who studies the neuropsychological effects of media on consumers. “On a practical level, that influences how they develop advertising appeals related to foods.”

Although some of this food gendering is subtle, much of the advertising people are exposed to is not so covert. Dr. Pepper, for example, makes no attempt to hide the explicit gendering of Dr. Pepper TEN. The commercials proudly state, “It’s not for women!”

When it comes to salads, it’s clear who the intended consumers are, as well. The trend hasn’t gone unnoticed. Originally inspired by a story on TheHairpin.com, a popular Tumblr blog called “Women Laughing Alone with Salad” features a large collection of stock photos, magazine covers and depictions of women who seem to be overjoyed by the mere fact that they are holding a bowl of mixed greens.

Campbell’s soups are also heavily gendered, Morgan says. When Campbell’s Chunky soups first came out, they were directly targeted at men, and regular and low-fat soups were for women. Even now, Campbell’s website instructs readers to “man up” with the company’s many varieties of Chunky soups, perfect for “NFL-sized appetites” listed below the slogan on the page.

Regardless of the food, female models in ads are usually classically beautiful. Women are expected to look magnificent, but society doesn’t place men under the same amount of scrutiny as their female counterparts; it’s there, but it’s not equal whatsoever. Look at the phenomenon that is the dad bod.

“If you think about the whole debate around what food we should be having, it’s not so much nutrition or wholesomeness that you should have,” Prasad says. “Quality is definitely a key concern, but as far as women are concerned, a lean body is definitely one of the most dominant issues.”

The effects of this appearance-related stress are no secret. Eating disorders are far too common among young girls who are repeatedly told they are only valuable if they are as beautiful as the celebrities and models on TV and in magazines.

Anorexia is the third most common chronic illness among adolescents, according to the National Association of Anorexia Nervosa and Associated Disorders (ANAD). Anywhere from 0.5 to 3.7 percent of women, or about 4 in every 100, suffer from anorexia nervosa in their lifetimes. This illness is even more prominent among individuals between ages 12 and 25. Nearly 70 percent of girls in fifth to 12th grades reported that magazine photos influenced their ideal body sizes, according to ANAD. That’s equivalent to 21 girls in a 30-girl classroom.

Men are affected by anorexia nervosa, too. Men are 10 to 15 of every 100 anorexia cases, according to a 1997 article in the American Journal of Psychiatry, as reported by ANAD.  This lower rate of men with anorexia compared to women suggests that women face more pronounced body image issues. Furthermore, the National Eating Disorder Association’s website cites a 2011 study’s statistic that says 20 million women and 10 million men will suffer from a clinically significant eating disorder in their lifetime.

"It's not what you eat; it's who you are." –Srirupa Prasad, assistant professor at MU

The implications extend beyond eating disorders. The constant portrayal of women eating light, healthy meals while men eat large, filling ones contributes to the antiquated yet prevailing performance of gender roles, Morgan says.

“There was this big push in the early 1900s, late 1800s especially, that women were supposed to eat daintily,” she says. This trend contributed to the notion that women didn’t really need to eat as much because they didn’t do as much work as men. Their jobs were to cook and clean — a perception that still lingers today.

This food gendering not only hurts those individuals who feel pressured to look like the women in the advertisements, but it also harms women as a whole who continue to be seen as less than men.

“You are a particular person by what you eat, by the way you eat it, the amount you eat,” Prasad says. “Therein lies the power of these cultural messages. It’s not what you eat; it’s who you are.”