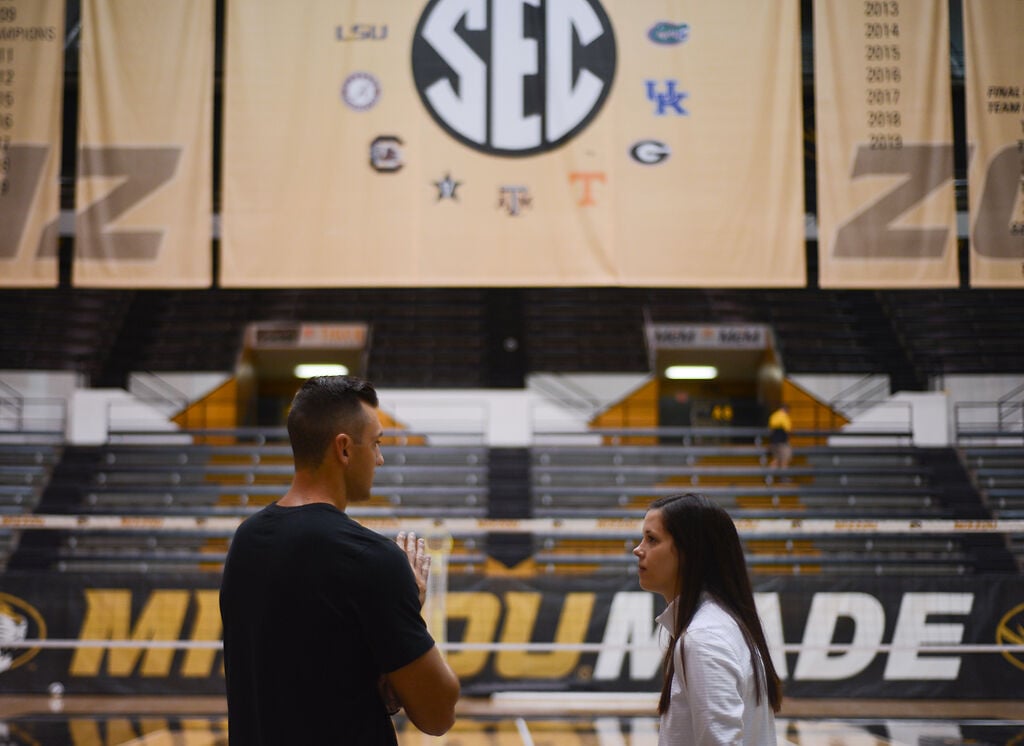 Josh and Molly Taylor met in 2015 while training for the men's and women's national volleyball teams. Now, they're volleyball coaches at MU. 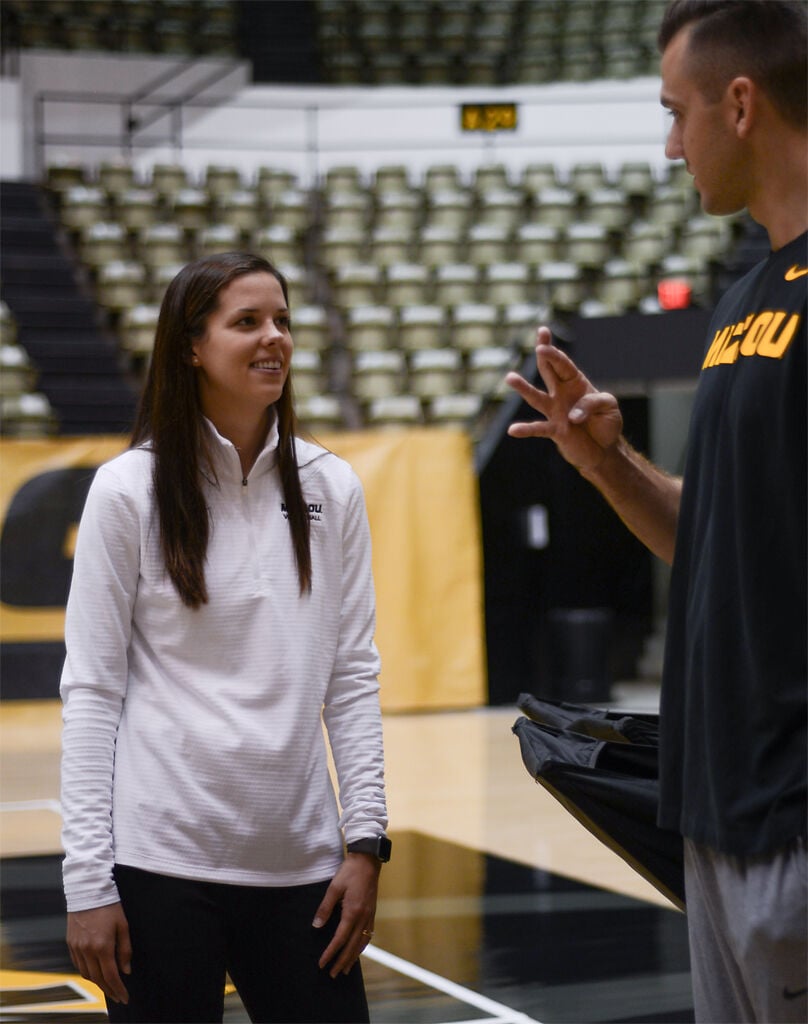 In her senior year on the MU volleyball team, Molly Taylor, formerly Molly Kreklow, helped lead the Tigers to a perfect 34-0 regular season. 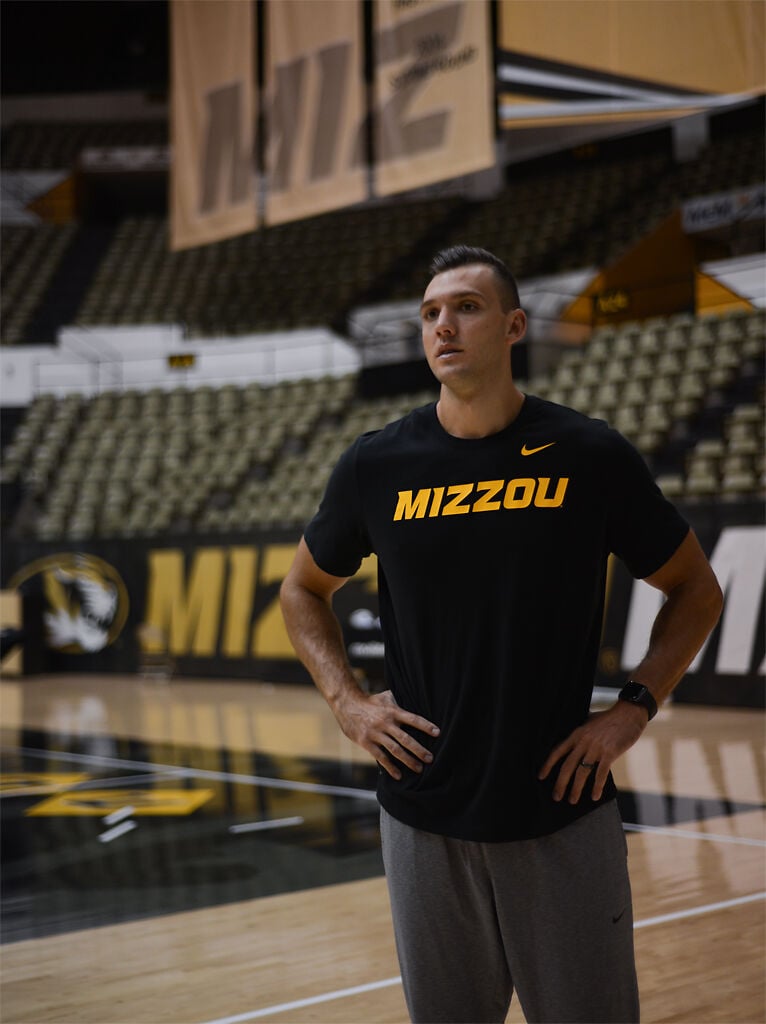 During his time as interim head coach in 2019, Josh Taylor's team finished 22-8 and made its 16th NCAA Tournament appearance.

In 2015, on court A2 of the Anaheim Sports Center in California, future Missouri volleyball head coach Josh Taylor spotted Molly Kreklow in person for the first time.

“I saw her from afar and got really scared and nervous,” Josh says.

Molly, who was a setter for Missouri from 2010 to 2013 and was a first-team All-American her senior year, was training alongside Josh with the men’s and women’s national teams.

They didn’t know it then, but in two years, they’d be married assistant coaches under Molly’s aunt and uncle, legendary MU volleyball coaches Wayne and Susan Kreklow. They certainly didn’t know that two years after that, in 2019, the Kreklows would retire after leading the Tigers to two Southeastern Conference Championships and 15 NCAA Tournament appearances in 19 years, or that Josh would now be entering his second season as Missouri volleyball’s head coach with Molly as an assistant.

Josh and Molly started at MU after Molly was cut from the women’s national team just before the 2016 Olympics. The Kreklows gave the pair the chance to join the Missouri volleyball coaching staff as graduate assistants for Missouri during the 2016 summer camp.

“That’s where we both fell in love with coaching and realized maybe when we’re done playing this is something that we want to do,” Molly says.

Vacancies opened on the staff in 2017, and Josh and Molly accepted positions as assistant coaches. They married soon after.

As assistants, the Taylors helped lead the Tigers to the second round of the NCAA Tournament in 2017 and a 24-8 record in 2018.

Then, just months before the 2019 season, a shock wave rocked the Missouri volleyball team: The Kreklows announced their retirement.

“We still remember that day because it was probably one of the more emotional days that we’ve had,” Josh says. “We just didn’t know what to feel.”

During their reign atop Missouri volleyball, the Kreklows led the Tigers to 413 wins with an astounding .680 win percentage. From 1974-2000, before the Kreklows took over the program, the Tigers had never reached the NCAA Tournament and only had a winning percentage of .474.

Having coached at MU for two decades and at Columbia College for one, the Kreklow family had put down roots in the community. Not only had Molly, their niece, played for the Tigers, but their daughter, Ali, was also on the team from 2014 to 2017.

“I tried to put myself in their shoes,” says Molly, who was also shocked by her aunt and uncle’s retirement. “Having been at the program for so long and having so much invested in it, deciding when the right time to walk away must be extremely challenging.”

Josh was named interim head coach on July 18, 2019, the same day the Kreklows retired and just weeks before the team’s first match against the University of Miami in Florida.

“In our minds, the first priority was always the players,” Molly says. “This was a shock, even for us, but is probably even more of a shock for them. How do we take care of them and get them ready for a season when we start in three weeks? It was a pretty crazy turnaround.”

It wasn’t until mid-November, 22 games into the season, that Missouri removed the interim designation and signed Josh to a five-year contract. At that point in the season, Missouri was 16-6 and had peaked at No. 17 in the American Volleyball Coaches Association poll.

But the Taylors didn’t allow the transition to affect the season. The Tigers went on to win 22 games and again reached the second round of the NCAA Tournament. The team had one of the best attacking offenses in the country, finishing the season with a hitting percentage of .302, Missouri’s second highest mark ever.

“I don’t think people understand the pressure that was on us to perform last season and get the team where it needed to be,” Molly says. “We were under (the interim tag) almost the majority of the season. We knew we needed to win, or we were not going to have these jobs.”

The Tigers were expected to compete for a top spot in the SEC because of the firepower on offense provided by players such as 2019 All-SEC members Kylie Deberg, Andrea Fuentes and Tyanna Omazic.

The couple attributes their ability to work well together to their time with USA Volleyball, where they learned how the national teams played the game. It also helps that their roles are split. As head coach, Josh focuses on the defense, while as an assistant, Molly leads the offense.

That chemistry will help in a season that has been dramatically affected by COVID-19. Missouri is playing just eight games over the course of six weeks, with the Tigers’ season concluding Nov. 21 at Ole Miss. For comparison, Missouri played 28 regular-season games last year. The Taylors are determined not to let such challenges affect the season.

The Tigers’ eight games began Oct. 21 after being delayed five days due to positive tests on the team, but the truncated season will still conclude Nov. 21 at Ole Miss. During that six-week window, Missouri will play two games played back-to-back following an off period. A normal SEC schedule wouldn’t include two games in two days.

With the Tigers returning their top seven scorers from last season, the Taylors say they believe this team has the potential to reach new heights.

But the Kreklows left large shoes behind, and Josh intends to fill them.

“I want to be the greatest coach that ever lived.”

Why it's time to get behind MU women's basketball

Shoot for ultimate basketball fandom as MU preps for another season