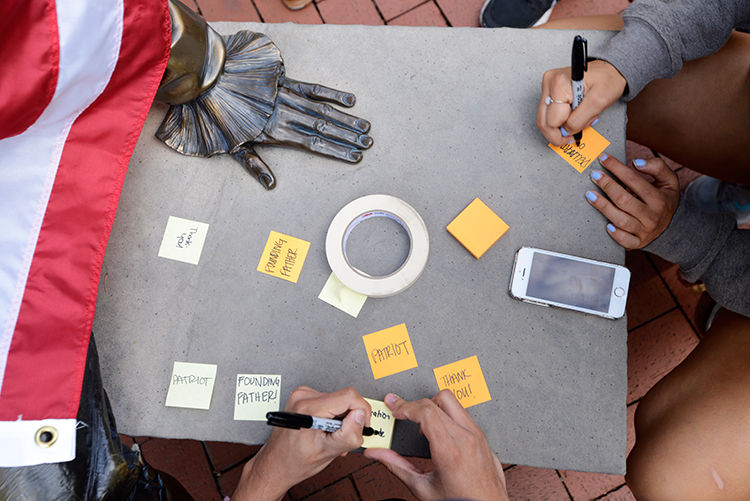 On Oct. 20, students protested and counterprotested the presence of the Thomas Jefferson statue on MU’s campus. Justin L. Stewart tried to humanize the statue by capturing Jefferson’s and the counterprotesters’ hands together. “I wanted to make them all relate as if he were alive,” Stewart says. Although he says it’s hard for one image to capture a story, this image speaks to a degree of the controversy surrounding Jefferson and the petition on Change.org to remove his statue. 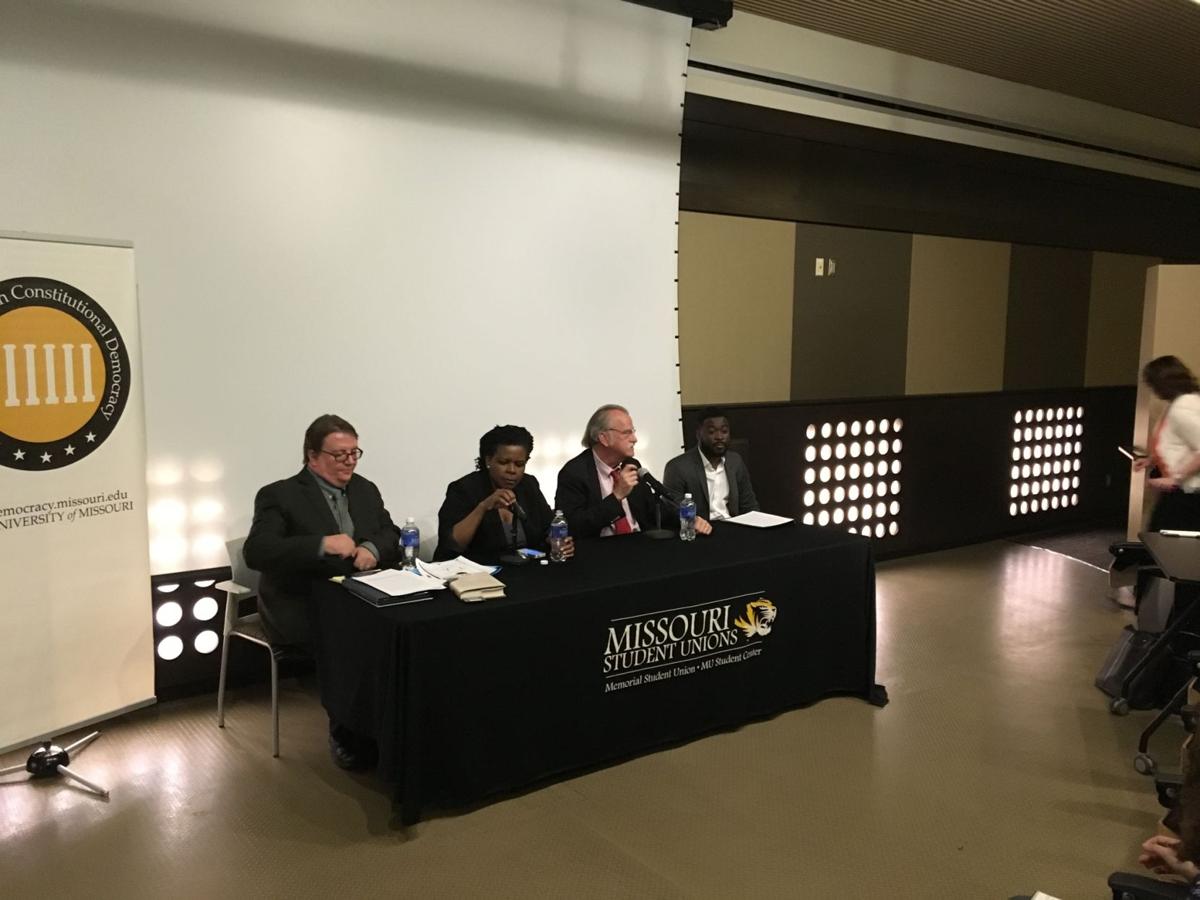 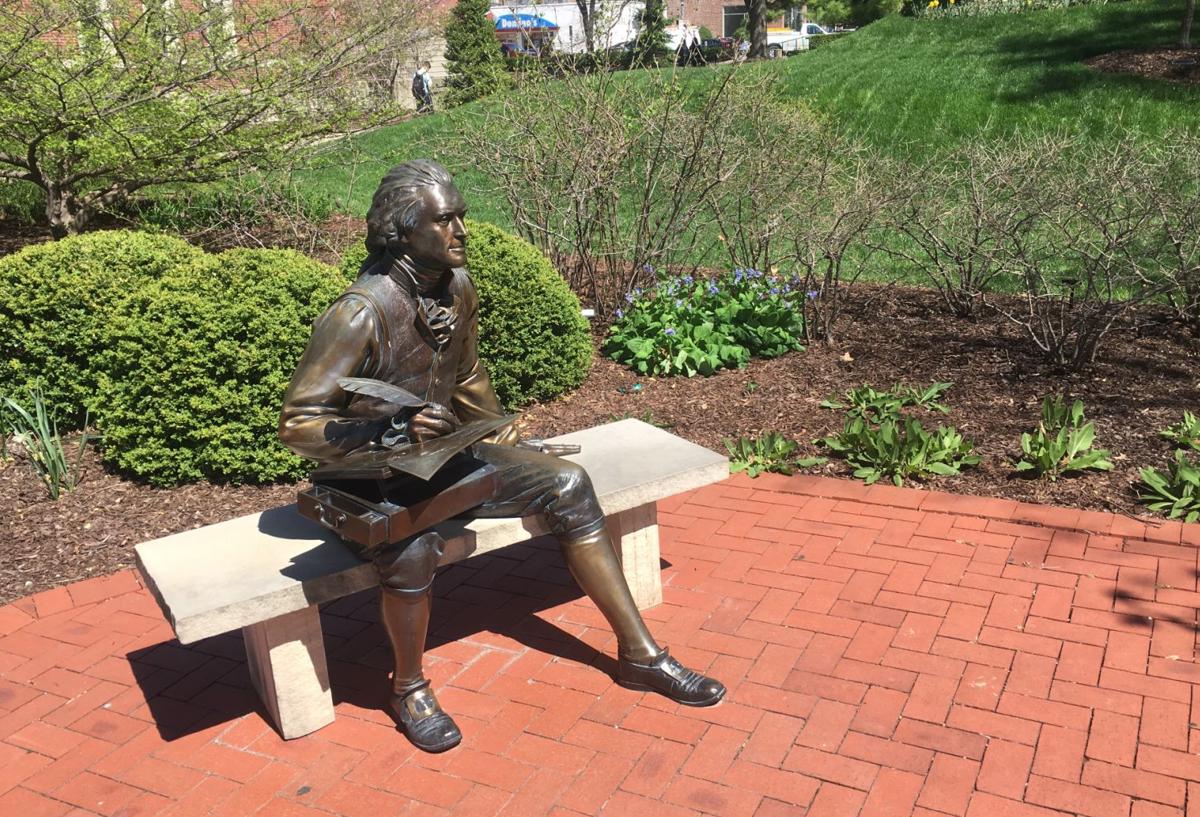 In June, MU students and faculty members spoke out about their desire to see the Thomas Jefferson statue on Francis Quadrangle removed. UM System President Mun Choi has stated that the statue will stay.

Above the hustle and commotion of MU’s student center, the Leadership Auditorium on the second floor of the building waited silently to play host to a public forum on Thomas Jefferson. Four white chairs sat behind a table cloaked in a tablecloth that read MU Student Unions.

Jeffrey Pasley, Annette Gordon-Reed, Peter Onuf and Maxwell Little filled the four chairs in front of a small audience Monday afternoon for the “Where do we put Thomas Jefferson now?” forum, which was hosted by the Kinder Institute on Constitutional Democracy. Pasley is a faculty member at MU’s History Department. Gordon-Reed and Onuf are well-recognized in the world of academia, and Little is one of the original members of Concerned Student 1950.

Little began the forum by citing selections from Frederick Douglass’ The Meaning of July Fourth for the Negro. In his introductory statement, Little continued to share the sentiment that racism exists on campus. He had a clear disdain for the statue’s presence on campus. “The Jefferson statue provides an outlet for white supremacy, sexism and racism to occupy public spaces,” Little says. He also agreed with Bryan Stevenson’s idea to not honor dishonorable things.

Onuf recognized the things that Little brought up, but he says that particular narrative is a fragment of the whole story. Pasley joked in his earlier introduction that Onuf might be part of the Jefferson establishment. Onuf did not discount that there is justified reasoning for racism to be associated with Jefferson, but throughout the forum there was an urging from the history professor and author for people to look at the whole picture and consider context. “You won't find an argument from us about the racial character of the democracy this country was founded on," Onuf says. "White supremacy is a nasty fact.” Onuf did commend Little for starting and continuing the dialogue that revolves around the controversial founding father.

Gordon-Reed dissented from Little and agreed with Onuf in how to address the statue at the university. The approach that Gordon-Reed and Onuf shared was one that added more context. Little is the author of a petition for the removal of the statue from campus. “You can’t put him in a closet,” Onuf says. “Lost history is not the answer.”

The Jefferson statue sits next to MU’s iconic columns and faces Jesse Hall. It has been there since 2001.

Little says that removing the statue will not remove history and pointed toward the literature in multiple campus libraries that have information on the topic. He says the proposal to remove the statue and the potential removal will continue the dialogue.

Gordon-Reed, Little and Onuf did not agree on what to do with the statue, but each of them recognized that the conversation about the history of Jefferson was long overdue. Gordon-Reed and Onuf suggested that in order for progress to be made, there have to be educated conversations about history taking place. When that happens, it will be easier to avoid the continued division on the good and bad narratives of Jefferson.

So where do we put Jefferson now? Gordon-Reed and Onuf see no problem with where he sits now. There just needs to be more context presented to those who walk by the figure everyday. 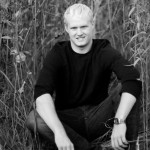