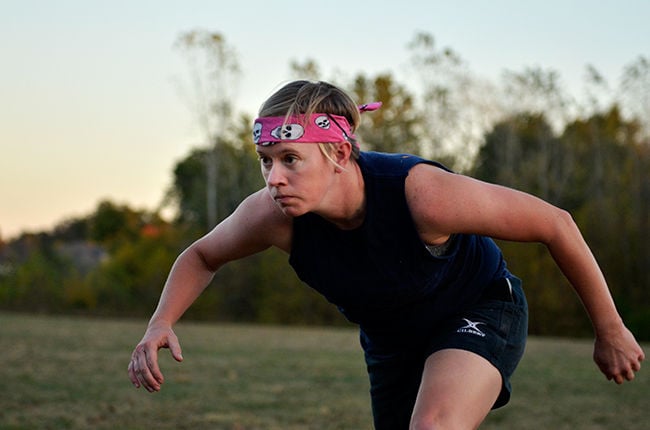 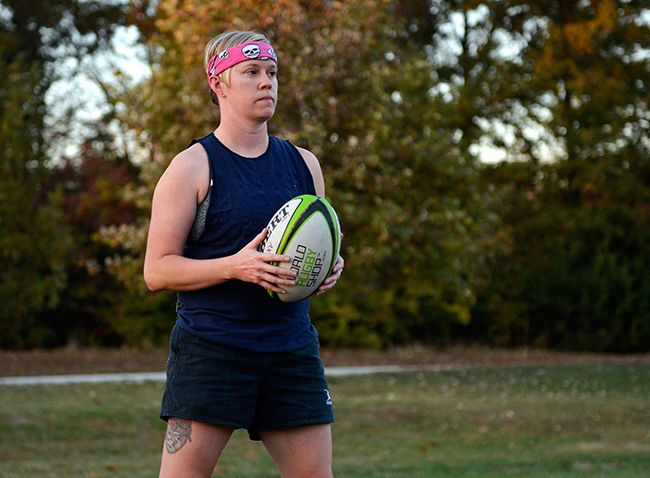 Christina Holzhauser is an activities director at a nursing home, part-time English instructor at MU, writer, mother of a 5-year-old boy — and has a list of injuries that would make anyone wince. But the broken nose, torn shoulder cartilage, ankle sprain and torn radial collateral ligament in her thumb are all the unfortunate results of a worthwhile game.

Hitting hard and playing rough with the Columbia Rugby Football Club’s women’s team, the Black Sheep, is where Holzhauser found an outlet for hercompetitive athleticism.

Although Holzhauser jumps into the rough and tumble with the best of them, Black Sheep member Leigh Walker says the team calls her “Grandma” because she’s been playing for so long. She also helps the girls keep their cool on the field. “When things start to get heated on the pitch, she is this playfully sarcastic force that reminds everyone we play for the fun of it,” Walker says. “I think people really respect her on and off the field.”

When the Mizzou Women’s Rugby Club changed its rules in 2009 to prohibit non-student members from competing, a few players, including Holzhauser, were left without a home. This gave them fodder for their name, and the five stray players started a team.

Black Sheep is in Division II of the Heart of America Rugby Football Union, which includes some college teams. The team started the season in September with a 57-7 triumph over Kansas State.

Holzhauser talks about her sport with her classes when the season rolls around. Students question the authenticity of her rugby team, assuming it’s powderpuff or a “lingerie” league. But Black Sheep play classic rugby, not a watered down version.

What is the best part about being a Black Sheep?

Having a team to support you — and not just on the field. My son was born four months premature, and I sent out a call to (my teammates) from the hospital. “Bring booze; bring Taco Bell!” And they all showed up. It feels like a family. Even when I try to quit because it hurts, I just can’t because they’re still my people. There’s a real sense of some strange bonding that happens. When you play another team, it’s customary to have a social afterward. So you might beat the crap out of each other for 80 minutes, but as soon as the whistle blows, you share a beverage and say: “Hey, that was really nice when you hit me earlier. What a great tackle. You annihilated me.”

Why did you start playing rugby?

I got into it in college in Houston because a coworker played and told me about it. I always wanted to play football, but my high school was so small we didn’t have football until senior year. But I was trying to get a softball scholarship, so I didn’t want to be bothered with that. I’ve always wanted to hit someone. So I went to practice, and the rest is history.

Have most of the women on the team played rugby before joining?

Generally, no. But you get a lot of soccer, softball, basketball players and swimmers. I’ve also played with people who were cheerleaders and gymnasts. Maybe people wouldn’t picture a cheerleader becoming a rugby player, but those are some of the toughest women I’ve (played with). I don’t know if they’ve bottled up the aggression for so long, but they hit the hardest.

How do people get involved with the team?

We’ve been known to just approach people who look like they might be interested in some sort of athletic thing. We’ll track people down on the Katy Trail, chase after and scare them. We’ve put fliers up before, but I think we do it best by word of mouth. We’re a growing team.

How is rugby different from other sports?

There’s a really awesome camaraderie. I don’t know if that’s because it’s an unusual sport in the States, so if you play it you’re like in a secret club. Anywhere you go, if you see a rugby jersey or any sort of rugby apparel you say, “Hey! I play!” And they say, “What position?” And you’re immediately friends. I think rugby is probably the way I’ve formed or had my friend group since I was 18. It’s also the only sport I’ve played where I’ve felt that on the women’s side, we play with the same-sized ball, the same-sized field as the men. And generally, from male rugby players, I feel just as much respect because it’s not “lady rugby.” It’s just rugby.

What do you get from playing rugby that you can’t find anywhere else?

A physical release. It’s like my yoga or meditation. I think you have to get lost in the game. Because there’s something about feeling like you’re in a car wreck, and then the next day, I feel so relaxed and calm. I think that’s just the feeling of being so full of adrenaline for two hours, just hitting people and getting hit. Then your body goes back to its normal state. It feels euphoric almost because it’s not stressed out anymore.