When Larry Campbell — a retired mathematics professor and bi-weekly columnist for the Springfield News-Leader — steered his way back to Branson, Missouri, it had been 51 days since he’d last glimpsed home. Both Campbell and his blue 2013 Mazda CX-5, “The Blue Goose,” were more than 6,200 miles the wiser. They’d been through seven states and 27 towns. They’d followed, roughly, the bumps and curves of the Missouri River, from Three Forks, Montana, to Washington, Missouri. His months-long quest to document the Missouri River and explore its history was a success: He came home with enough photos and stories to fill a book. He sat down and penned Rollin’ Down The River—Discovering People and Places Along the Mighty Missouri from his amalgam of journal scrawlings and pictures.

Campbell was inspired, in part, by Roadtrip with a Raindrop, Gayle Harper’s story about her journeys along the Mississippi River. It sparked an idea: He would take a roadtrip with only the river and his car as constant companions. Once his son, an avid outdoorsman himself, pushed Campbell hard enough, the retired teacher finally solidified an itinerary.

Today, Campbell says he would encourage anyone, no matter their background, to take a similar trek.

You were a mathematics professor for 34 years. How does a mathematician become a photographer and adventurer?

I’m not really sure I can even answer that myself. I didn’t retire terribly early, but I took a retirement package because — even to this day, I miss the math classroom — but I knew there were things I wanted to do while I was young enough to do them. I had no idea, absolutely no idea, this Missouri River thing was going to pop up. Once it did enter my mind, it took about six to eight months to really get a hold of me, and then after that I was hooked.

Where was the most interesting place you stayed?

Pony, Montana. A guy that took me floating on the Jefferson River, I stayed the night before in what he called his “castle.” And that was just a 10-by-10 structure with no electricity and no bathroom. There was an outhouse 100 yards away. And it had just an incredible view of the Milky Way and the Montana sunset. But it was sure the most unique place I stayed — no electricity, just candles.

What was the toughest thing about writing the actual copy for the book, and how did you come up with the right voice to use in the narrative?

It turned out to be easier than I thought for a couple of reasons. One, I forced myself to keep a journal along the way. It wasn’t very detailed, but I jotted down in each town the stuff that I did when I was there, but when I went back, it turned out that jogged memories really easily, and I was easily able to write two or three pages about each town I was in just from my notes. And of course, I had 4,500 pictures, so it wasn’t a matter of finding the picture, it was a matter of choosing which ones I was going to use.

Do you have any advice to left-brained thinkers like mathematicians who want to take on a more right-brained creative project?

Unless you get out there and take that first step, it sure as heck is not going to happen. The worst that could happen is that it doesn’t work out. It’s not going to work if you don’t try.

Stories from the Missouri River 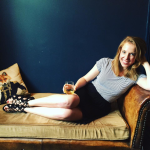 Online Editor and freelance writer. Midwesterner with a heart for basketball and good books.