Imagining death as a thing of beauty can be quite difficult — impossible, even. Artists, however, are inclined to find beauty in anything.

Sager Braudis Gallery director Hannah Reeves found beauty in Victorian postmortem portraiture. That interest turned into an exploration of memory and loss using fiber and an entire body of work now on display through Nov. 18 at Sager Braudis Art Gallery.

Reeves earned a master’s degree in fine arts at MU in 2008 and has worked at Sager Braudis for over a year. “She brought a level of academia to her directorship,” says gallery co-owner Joel Sager, whose work is also featured in the fall exhibit.

“She’s very proficient with fiber and has essentially invented a technique where she’s bleaching the material,” Sager says. “It sounds difficult to do, which means that executing it is exponentially difficult to do.”

Reeves discusses the challenges of curation, her artistic process and how she convinced a friend to model as a “deceased Victorian maiden.”

What do you like about being director of Sager Braudis?

The best part about it is that I’m part of a small team, and it’s all smart people who are kind of working toward the same goal, and there’s a really wonderful feeling in that. I do all of the promotional materials, and I’m kind of the face of the gallery and the person who’s here greeting people every day.

Describe the perks and challenges of curating.

The curatorial process is fun. It’s like its own creative process. When we put together an exhibit, we start with an empty room, and it, in a way, is like a blank canvas, and so there really is composition that’s happening when we’re arranging it.

We also try to combine artists in a way that doesn’t quite guarantee but maximizes the chance that any person who walks through the door finds something to connect with. So we want it to be diverse enough that different tastes are represented but related enough that it can visually sit together as a whole composition, as a room. So that’s a really interesting challenge.

What inspired your work in the autumn exhibit?

I’ve been working for a long time with ideas of memory, and I specifically get really fascinated when I think about ways that people desperately try to cling on to memories, especially since memories aren’t tangible. They’re fleeting. You can find these postmortem portraits (represented in the Victorian era). Children died at a really high rate. There may not be much to remember their short life by, and so they would be staged really elaborately, dressed up, stood up, eyes opened and shot in a photographic portrait. Because I think about memory and because I want to represent our very human desire to remember people that we lost and to be remembered, I decided to use a set of contrived Victorian or straightforwardly Victorian images, and so the body of work centers around the large postmortem portrait.

Who is the woman in your postmortem portrait?

It’s my friend Megan. I think I texted her, “Would you want to model for me? ... You would be depicted as a deceased Victorian maiden if that makes any difference.” And she was like, “Oh yeah, of course, that’s awesome.”

What was your process for using bleach as an art technique?

I feel like it’s in my DNA to be a fiber artist. I tend to envision things incorporating fabric from the very beginning. The bleach process, however, was not an extremely natural use of materials for me. Eventually, I devised a stenciling method.

(For this exhibit), every form depicted I drew once and then I traced my own drawing in order to create a stencil, and then the stencil was used for the bleach layer. Then that was rinsed and neutralized. And then I go back in and draw the whole thing again. For example, with the clock, the stencil took me a really long time to cut an elaborate stencil of this Victorian clock, but it took many, many hours to go back in and draw the piece.

What advice would you give to aspiring artists?

You have to be willing to recognize when something’s not up to par and be okay with that. You put all this time into this, and it’s clearly not meeting your standards, so it’s hard to let go. But that’s an important part of being a professional artist. 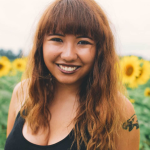