MU came under national scrutiny in August after it euthanized seven beagles that had been used to study the effects of a topical acid on corneal ulcers. Opponents of animal testing were upset the dogs were not put up for adoption instead. The experiment also did not use enough animals for it to be statistically significant, meaning it would need a follow-up experiment for results.

Suffice it to say, MU’s College of Veterinary Medicine has taken a lot of heat — including an ongoing lawsuit from the Beagle Freedom Project, which was not available for comment. The Los Angeles-based program tries to find new homes for animals used in research. The group sued MU in May for allegedly violating the Sunshine Law on more than 200 occasions over records requests for animals being tested. MU did not comment on the lawsuit or study. On a complex issue, Vox sought out answers to some common questions.

False: But it’s complicated. The FDA doesn’t require cosmetic products to be tested on animals. But, it does require animal testing for any candidate drug that uses a device not previously proven to be compatible with the human body. The FDA states that animal testing is used to measure “how much of a drug or biologic is absorbed into the blood; how a medical product is broken down chemically in the body; the toxicity of the product and its breakdown components; and how quickly the product and its metabolites are excreted from the body.”

Yet, the vast majority of drugs tested on animals don’t make it to market. In 2004, FDA Commissioner Lester Crawford said that 92 percent of candidate drugs entering human trials (which were previously tested either on animals or in a test tube) never survived the four-phase clinical trial process needed for approval.

Scientists who conduct animal research operate with oversight and regulation

True: All research institutions are subject to a litany of state and federal guidelines, the most prominent being The Animal Welfare Act. The AWA was signed into law in 1966 and sets the minimum standards of care that must be provided to animals with regard to housing, handling, sanitation, food, water, veterinary care and protection from weather extremes. Warm-blooded species are covered, except for birds, some rats and certain mice.

The most powerful regulatory entity is the Institutional Animal Care and Use Committee. Dr. Jeff Henegar is a member of MU’s IACUC, and this committee has the final say on every experiment*. Federal guidelines dictate the IACUC must have five members, but the committee that oversees MU actually has 14. It is made up of six scientists with different areas of expertise. “If you’re going to work on a certain species, we have experts there who can review that properly,” Henegar says. It also has two non-scientists, two community members and veterinarians*.

Henegar says a study can only be ruled a failure if the researcher didn’t use enough test subjects. The now infamous MU study only used seven beagles, which the study author says was due to the impracticality of using the two groups of 12 dogs needed for the study to be statistically significant.

Any animal could be subject to multiple studies

False: No animal can be used in more than one study, says Henegar. MU’s College of Veterinary Medicine currently has 448 animal-use studies going on, but within each protocol, there are multiple experiments. So within one study, an animal would likely be subjected to several tests, but it all has to be for the same study. In all, there are 21 species currently being tested on MU’s campus including mice, rats, guinea pigs, cats, dogs, pigs, cows, horses, sheep and chickens.

True: McIntosh says drug studies on MU’s campus are close to beginning human treatment trials for diseases such as muscular dystrophy, cancer and diabetes. Treatments against viral infections such as HIV, Hepatitis B and Zika are also being tested on animals.

MU is also working toward developing pigs that are immune to certain diseases that are easily spread while they are shipped around the country for the pork industry.

There will never be an alternative to animal research

However, if advancements continue with stem cell research, it might take over animal testing.

* CORRECTIONS: An earlier version of this story mischaracterized Dr. Jeff Henegar's role on the Institutional Animal Care and Use Committee. Additionally, several veterinarians sit on or advise the committee.

So, what do scientists need to prove in order to test on animals?

Any researcher who wants to do testing on animals must first get approval from the IACUC and normally needs to obtain funding from either federal grants or a private company. McIntosh says, “Every project that is going to be carried out on this campus has to have a structure in place that ensures an experiment is necessary, well-characterized and well-designed.”

Once a study has been accepted, its researchers are still subject to oversight from the IACUC. This committee has the authority to shut down a study at any time. Henegar says the committee is in place to make sure researchers handling these animals are trained properly. 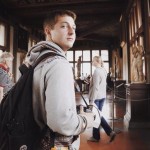